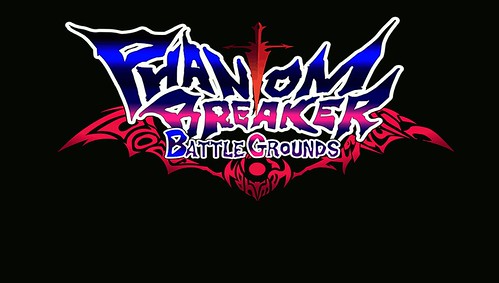 The PlayStation Vita is home to a lot of different genres of games, new and old.  One genre in particular that it is in no shortage of is the fighting and brawler genre.  There are a lot of fighting games on the Vita, from PlayStation All-Stars to BlazBlue to Street Fighter x Tekken.  One thing it doesn’t have a lot of is the kind of brawler that doesn’t always have you only playing through one on one fights in small arenas.  There were some games years back that had you playing a brawler against multiple enemies across expansive areas.

That genre isn’t completely dead.  Not that long ago, the PlayStation Vita got a game much like this.  Taking advantage of how eager Third Party developers are to port and remake games from other consoles onto the Vita, we have gotten a new brawler to the system that isn’t like any other on the system.  This game was taken straight from the Xbox Live Arcade.

Having only been released for about a week, this game still has a lot going for it, though it is one of the many digital-only titles for the Vita, only playable if you buy it and download it from the PlayStation Store.  Pulling nostalgic music and graphics with fast-paced brawler gameplay and an anime style of characters, here is our official review of Phantom Breaker: Battlegrounds. 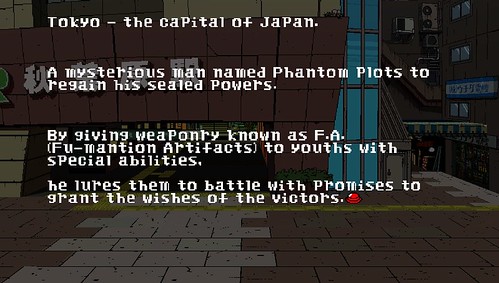 The story of Phantom Breaker takes place in Japan.  A man known as “The Phantom” appears, whom is a being with sealed powers beyond that of a normal human.  He gives special weapons to various youths, promising to make all their dreams come true if they fight with the weapons.  What they don’t realize is that, by using these weapons, they are weakening the space-time continuum, inevitably opening the gateway to another world as well as unsealing The Phantom’s sealed power.

The story isn’t incredibly deep, but it is set up and progresses and deepens a little in each stage.  There isn’t a lot of character development, but it’s enough to explain who everyone is and what they’re doing. 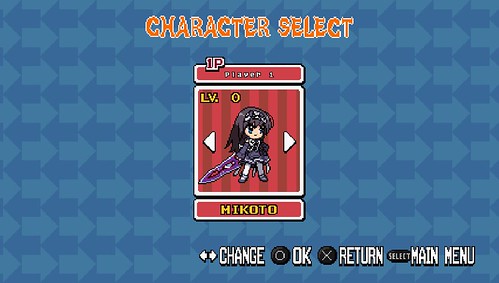 Phantom Breaker is a side-scrolling action game.  That is the most basic explanation that we can give for what this game is.  During the game, you will be traversing a 2D plans and duking it out with waves of enemies as well as boss fights.  However, there is more to the game than this.  There is a 3D element to the game as well as RPG elements thrown into the mix when you’re playing through each stage of the game.

The game progresses in stages.  There are 10 stages total, each having a different environment as well as different enemies and boss fights for you to play through.  The stages will have different areas for you to progress through.  You can move left and right and there are also two plans for you to move around on and freely move between.  This is similar to the 2 different plans in games like LittleBigPlanet, where one if in the front and another in the back.  Each area will require you to defeat all of the enemies in the area and you will fight until you get to a Boss Fight.

As you play through the stages, the RPG elements will begin to show themselves to you.  As you defeat enemies, you can collect money and red jewels that are dropped.  These function as Experience Points.  At the end of each stage, your experience will add to your total and your character will have a chance to Level Up, up to Level 50.  As you increase your level, you will be able to get Skill Points to spend on learning new abilities or increasing your stats. 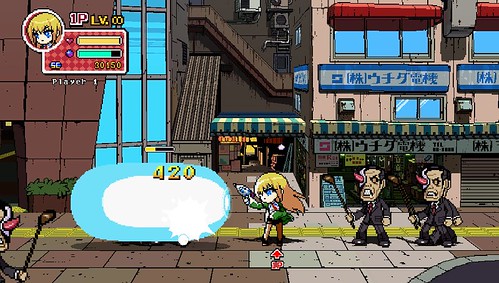 Another way to go through the Harder Difficulties is through the Multiplayer.  By means of either Local or Network (Online) Multiplayer, you can team up with up to three friends and tackle the game together.  While this isn’t needed for the Easy difficulty setting, it can be very much required for the hard difficulties if your character isn’t leveled enough, as in Single Player, it’s you against all enemies, as opposed to you and friends against them.

Overall, Phantom Breaker is not a long game.  A single play through the game with a single character will only take you around 2 hours to finish on Easy or Normal mode.  Each of the ten stages shouldn’t take you much more than around ten minutes to finish each.  If you tie this will unlocking all of the individual characters, you can expect the game to last about 6-8 hours total.  All in all, though, it’s a pick-up-and-play game and is better in short bursts than long ones.

The control scheme for Phantom Breaker: Battlegrounds is very easy and simple, especially considering this was originally a game on the Xbox 360.  There are no touch controls for the game, and there aren’t that many button controls for it, either.  It’s a very simple scheme that is very easy to get the hang of.

Moving your character around the field is done with the D-Pad.  There are no options to use either of the Analog Sticks for anything in the game.  The D-pad controls all movement, whether you are walking or dashing.  The rest of the controls are done with the face buttons and the shoulder buttons.  The L Button allows you to switch between the two planes available to you, and the R button allows you do unleash a special magic ability with energy you collect while dealing and taking damage.

The face buttons are used for blocking and attacking enemies.  The X Button is used for blocking incoming attacks as well as doing special attacks in combination with the various D-Pad buttons.  This is where the game feels more like a fighting game, adding different attack combinations by combining the four face buttons with the D-Pad.  The other three face buttons incorporate various attacks, though those don’t offer special attacks like the X Button does.

The controls are very easy to learn and get used to, especially if you’re used to playing fighting games or other action games like this.  They’re not explained to you outside of a tutorial you can find in the menu, though they’re fairly easy to figure out on your own. 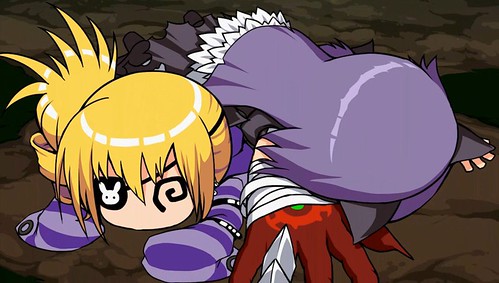 The presentation of the game is interesting.  The game is clearly trying to appeal to fans of old beat-em-up games from the early generations of gaming.  The visuals have a very early SNES-like feel to them and the music in the game is 8-bit, like you would expect to hear from an NES title.  They do a good job at providing nostalgia, though if you aren’t expecting that, you may not be incredibly excited about how the game looks, not seeing smooth visuals and flashy 3D magic effects.

As far as the game plays, though, it plays well.  There are very short loading sections between each area of the game, and the game never lagged or slowed down as we played through the game.  Every action is fluid and the game reacts to controls very well.  Despite originally being an Xbox 360 game, Phantom Breaker plays and flows very well.

Phantom Breaker: Battlegrounds is a very unique game.  The combat is very fast-paced and fun to get into for a short play session, and there are no technical issues to speak of.  While the game’s visuals aren’t very smooth and each story mode only takes about 2 hours, this game will provide with a fun beat-em-up adventure at a low price point for fans of action games and anime alike.