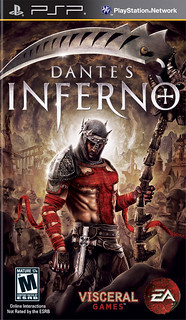 The PlayStation ecosystem of systems has been home to many franchises, of various types, over the years.  There are casual, fun games like LittleBigPlanet and Gran Turismo.  Along with those, there are more Mature, violent games like SOCOM and God of War.  Among all of these, there are games that are similar in style on other consoles, or just other franchises in general.

Electronic Arts and Visceral Games made a bold move four years ago.  They announced a game called Dante’s Inferno, creating a video game adaptation of Dante Alighieri’s famous poem “Inferno”, part of The Divine Comedy.  The game received a lot of criticism within its development, given the Christian elements of the game as well as the violent nature of the game.  Having released on several consoles, here is our official review of the PSP title, Dante’s Inferno. 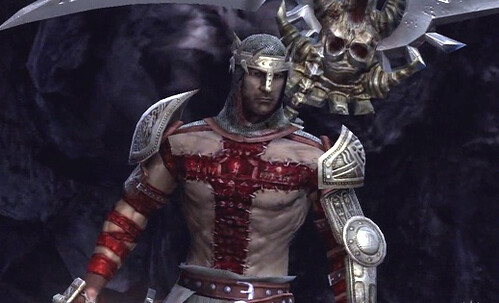 The story of Dante’s Inferno differs greatly, but is still loosely based on Dante Alighieri’s poem.  The game shows Dante as a Crusader during the Third Crusade, rather than a Poet.  At the beginning of the game, he is fighting during the Crusades before he is stabbed and Death appears before him.  Strong in his beliefs and what the head Bishop had told him, he overcomes Death, stealing his scythe in the process.

Upon getting home, he finds his lover, Beatrice, murdered, and her soul appears before him, being dragged down into the depth of Hell with Lucifer, himself.  With Death’s Scythe and a Holy Cross in hand, Dante pursues them through a crack in the Earth and descends through the Gates of Hell to atone for his crimes and save his lover’s soul., with a soul known as Virgil as his guide.

The story has been changed dramatically, but the basic idea of being led through the nine planes of Hell remain true in the game.  In each section, you will hear words from Virgil which are almost taken straight out of the actual Inferno poem to inform you about what each circle stands for and whom are stuck there for their crimes. 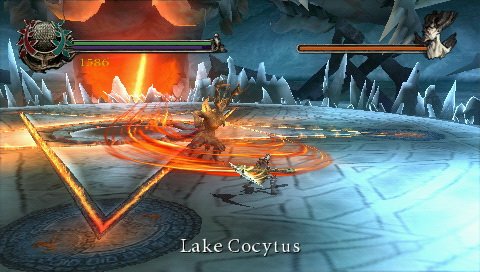 Dante’s Inferno is an Action-Adventure game in the vein of God of War.  The game has you traveling through each area of Hell with your Scythe and Cross in hand, defeating hordes of enemies and bosses, and solving puzzles to proceed to the next area in your goal of finding and recovering the soul of Beatrice.

The game is often called “The Christian version of God of War” because of how many similarities the game holds to the gameplay of the God of War franchise, but set it in a mix of Greek and Christian myth, as opposed to just Greek.  This comes from many things, from how the game plays to the way it controls and how the game progresses, from start to finish.  For an intents and purposes, it feels just like a God of War game, but set in Hell instead of Athens and Hades.

From the very beginning of the game, you will have access Death’s Scythe, and will be able to obtain the Holy Cross later on.  These are going to be your main tools of destruction to eliminate the hordes of monsters and demons that Lucifer sends after you.  These two are weapons you can perform combination attacks with and can learn abilities for.  You will also obtain four spells that will use Magic as you progress through the game and conquer boss fights.

Very different from God of War is how you finish off enemies.  While you can grab enemies and defeat them in very gruesome ways, you will be able to collect Souls and different types of Experience when you finish an enemy either with a cinematic scene or a Grab Finish.  Souls will be obtained regardless, but you will be able to either Punish or Absolve enemies. 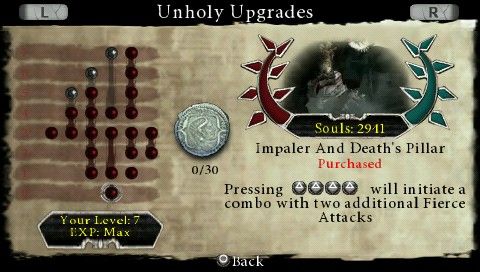 Progression will consist of fighting off hordes of enemies, each specific for the section of Hell you’re in and, like God of War, your exit will be blocked until you are able to defeat each and every one of them.  Whenever you aren’t fighting off enemies, you will be taming giant monsters and navigating moving platforms, or climbing walls of Lost Souls to get to the next area.

While there aren’t any items you can gain to heal your Health and Mana (for spells), there are various statues that you will encounter across the game.  These statues have purposes.  The Beatrice Statues allow you to save your game, and there are smaller fountain-like statues that can be used to restore Health, Mana, and collect Judas Coins.  Virgil also normally appears near these statues to give you more of the insight of where you are.

Despite this, the game should last you a good 5-8 hours on a single run through the game, depending on which difficulty you choose as well as options to using New Game Plus to go through and get everything that the PSP game has to offer, which is about the same amount of content that the PSP God of War games can offer.

Controlling Dante when playing through this game will be very familiar to fans of the God of War series, particularly God of War: Chains of Olympus.  The familiarity comes with the fact that the control scheme is almost exactly the same as from that game.  While you can re-map controls to the touch screen and Right Analog, expect the game to play very, very familiar.

You can control and direct Dante with the Left Analog Stick and launch spells with the D-Pad or, as I like to use it, redirected to the Right Analog Stick.  You can jump and double-jump with the X Button and perform physical attacks from the Scythe with the Square button, whether airborne or grounded.  The Circle Button is also used for physical attacks, but for the Holy Cross weapon, rather than the scythe.

The L trigger is used to block incoming attacks, and the R button is used for grabbing enemies to Punish or Absolve them with Square and Circle, respectively.  You can also Hold the L and R buttons down together for dodging attacks.  The start button will be used to pause the game and access your Unholy Abilities and Holy Abilities you have bought or are planning to buy.

The control scheme does use a lot of the buttons on the system, but isn’t hard to learn and remember, especially if you’re a fan of the God of War franchise. 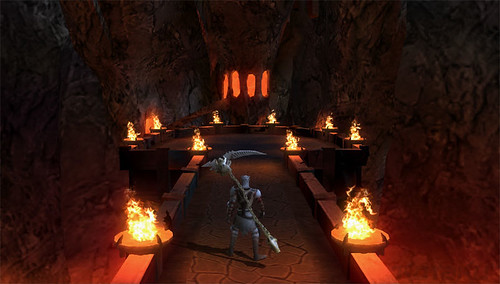 Dante’s Inferno looks pretty fair for a PSP game.  While the visuals aren’t quite up to the quality of the PSP’s God of War titles, but all of the environments look very detailed and it’s smoothed out to eliminate as many jagged edges as possible.  While being stretched out on the Vita added many jagged edges to the game, it’s mostly only noticeable on Dante, himself.  The environments and monsters still look detailed and creepy, just as the game was aiming for.

While Load Times are short and the game doesn’t fidget, the Animated Scenes are a problem that this version of the game holds.  The developers gave the PSP version its own gameplay engine, but the scenes are taken straight from the PS3 and Xbox 360 version of the game.  This makes them look quite impressive for a PSP title, but it also hurts the game, as the audio will oftentimes cut out of the scenes or play out of synch with the animations.

Dante’s Inferno is a nice way for any God of War and PS Vita fans to get a fresh take on the gameplay style as well as seeing an altered version of the popular Divine Comedy’s Inferno poem.  However, with far less content than its PS3 counterpart and scenes causing major audio issues, this game has some pretty fair faults for those wanting to play the game, rather than just playing it portable.