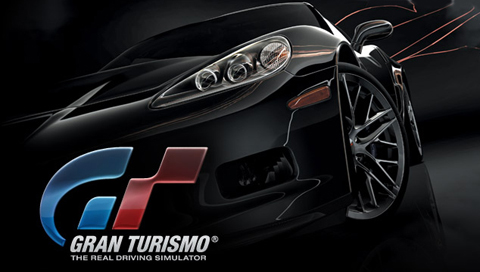 Racing and Driving games have been in the gaming market since the very beginning, from Excite Bike and F1 Race on the NES all the way through games like Need for Speed, Midnight Club, and Forza on the more recent systems.  For as long as video games have been around, there have been games for driving and racing, constantly getting more and more realistic over the years.  While some of them remain a certain aspect of unrealistic recovery from crashes, there are those that keep the realism.

One of the major franchises that relies on providing realism with racing is Gran Turismo.  One of Sony’s largest franchises through Polyphony Digital, the series has been around since the original PlayStation, providing a simulated driving and racing experience renowned as being “The Real Driving Simulator”, showcasing realistic physics and driving differences between each and every car provided within the game.

Back in the last generation of handhelds, Sony and Polyphony Digital brought the Gran Turismo franchise to the handheld market with a title simply titled “Gran Turismo”, often referred to as Gran Turismo PSP and GTPSP.  For the longest time, this game was not compatible with the PlayStation Vita within all of its regions.  Thanks to a recent change, it is available in both Europe and North America.  Here is our official review of Gran Turismo PSP! 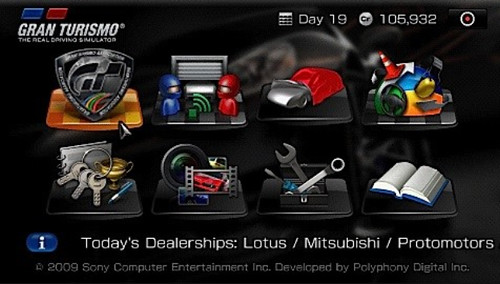 Gran Turismo is one of those franchises that has never had a storyline to it, nor has it ever needed one.  Gamers don’t play Gran Turismo for racing along with some story scenes and a plot, like some of the Midnight Club and Need for Speed games.  Gran Turismo, like Microsoft’s Forza franchise, is all about driving and handling vehicles of all kinds and, particularly, your own personal dream car.

If anything, the story is that you’re a car enthusiast racing and proceeding through challenges to earn money and acquire any and every car that is on the market.  Aside from that, expect no story in this game at all. 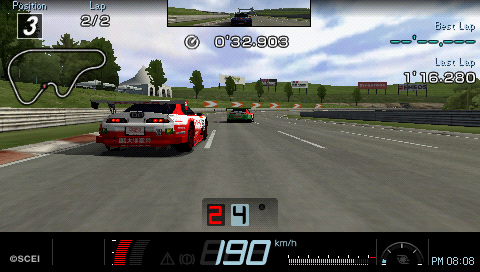 Gran Turismo is a driving simulator.  What you will be doing for the majority of the game is a collection of buying and racing cars.  When you first boot up the game, though, there will be a number of different things and different game modes that you may participate in.  While you will be driving a lot, there are many other things you can do as well as many different ways you can drive and race.

When you boot up the game, there will be three different game modes for driving: Single Player, Multiplayer, and Driving Challenged, as well as the Dealerships, Status Report, Gran Turismo Theater, Options, and User Manual game modes.  On the Home Screen, you will also be able to see what Day it is, how many Credits you have to spend, and an icon in the far-right corner to save your progress.

The Dealerships area is going to be one of the modes that you watch often.  Unlike previous Gran Turismo games, you don’t have access to every dealer and every car to purchase at any given time of your choosing.  The game runs a Calendar where a day passes every time you perform a race or do driving challenges.  When about 2 days pass by, the Dealers that are offering vehicles will change. You will have access to four dealers at any given time and, even when you get the same dealer again, the cars they have for purchase may be completely different from the ones you’ve seen before.  It’s important to remember that when you’re racing and trying to earn enough credits for a certain vehicle to make the best of your time.

The Status Report and Gran Turismo Theater sections are mostly used for checking your progress and watching movies and replays.  The Status Report section has logs of everything you do, from how many days have passed since you began, Total Credits, Number of victories in Single Player and Ad Hoc Multiplayer, Gold and Silver and Bronze Medals in the Driving Challenges, Car Collection, and your AI Driver Level based on how successful you are in races.  The Theater is there to watch the cinematic Introductions, Endings, and race replays you have saved.

Options and the User Manual are normally those wanting to customize the settings for the game or to learn about various things about the game, like how the game modes work.  When you go into Options, you can adjust settings like the music, background music, sound effects, installing data onto the Memory Card to improve Load Times, as well as remapping the controls.  The controls are unique as anything can be set for any button, including Start and Select.

When you want to Drive, you have three options: Single Player, Multiplayer, and Challenges.  Single Player allows you to start any race against AI you would like, with choosing whether you want to do a Time Trial, Normal Race, or a Drift Challenge to earn Credits.  This can be done with any car that you have bought and own, and on any of the game’s 45 tracks (more if you count the Backwards/Reverse versions of some of them), from the Top Gear Test Track to the infamous Nurburgring. 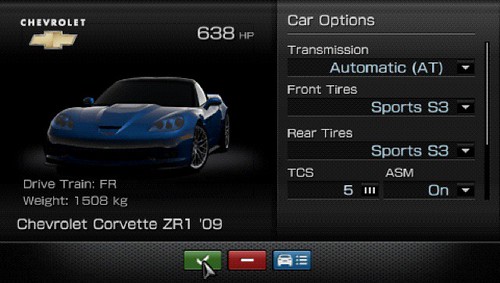 Multiplayer is set up the same way, but will work against local players via the Ad Hoc Mode.  The game doesn’t support online multiplayer, so you will only be able to do this with another player with a PSP or a PS Vita with the game installed on the system.  Though Multiplayer offers a Bonus System with winning races, allowing you to get Credit Multipliers if you win several races in a row, allowing for mass consumption of credits.

Driving Challenges are the main “campaign” of the game.  Gran Turismo PSP doesn’t have an extensive A Driver and B Spec Driver racing campaigns like the likes of Gran Turismo 5 and 6 have, but it does have over 100 Driving Challenges for you to take part in, each set in categories and are similar to the License Challenges from previous entries of the series.  These set you in tracks with specific cars and specific situations to teach you how to handle each different type of braking, turning, and more to prepare you for playing each and every track of the game in Single Player.

When you load up a track in Single Player, you will be racing your vehicle against AI vehicles of the same class, so as to give a bit of a challenge, no matter which car you’re driving, though the AI doesn’t change if you customize your vehicles by tuning up the engine and handling to perform higher than it is at standard.  The cars it chooses are random from a list, assuming your car isn’t the only in its class, like the Polyphony Digital Formula Gran Turismo or the Ferrari F2007.

Getting into a race is where the real fun begins.  When you’re in a race, you will race or drift around the track of your choose with the amount of time and laps of your choosing.  You will be fighting your way to 1st Place to get the most Credits you can.  This is done by driving and bypassing your opponent.  This can be done in many ways, and will handle differently with each car you drive.  As the title “The Real Driving Simulator” suggests, every car drives completely different from any other car.  You will go in and have to adjust yourself to how each individual car performs, whether they brake faster or have less or more tension than others as well as how quickly it can build up speed.

Winning races will net you Credits and that is used to buy one of the 800+ cars built into the game.  As such, this game is filled with content, mostly in the form of tracks, challenges, and cars.  While it doesn’t have as many modes as its PS3 counterparts, it’s still pretty packed with content to unlock and play around with.  The Driving Challenges should take you at least a good 3-4 hours to complete, assuming you can catch onto them quickly, lasting much longer for beginners of this series.  With collecting every car, we would be talking dozens of hours of racing, even if Credit-Boosting in Multiplayer.

The controls for Gran Turismo aren’t incredibly simple, since there are a lot of things you will be doing when you’re racing.  You will be using every button on the system, including both the D-Pad and Left Analog Stick.  As such, it is advised that you map the D-Pad to the Right Analog Stick for a more comfortable experience, especially if you like driving with Manual Transmission as opposed to Automatic.

Steering your car to the Left and Right will be done with the Left Analog Stick and the D-Pad will handle the same, but also handle shifting up and down with the Up and Down D-Pad buttons.  Accelerating your vehicle can be done with either the X Button or the Circle Button, and braking will done with the Square Button.  Though there is another brake, with the R Button handling the Emergency Brake for drifting and quick stops.

The L Button will be used to change the view to look what’s directly behind you, mostly to see how close your opponents are to catching up with you.  The Start button pauses the game and Select Button can also change your view from Cockpit view, Hood View, and Third Person View.  All of these controls are interchangeable, but it can be a lot to take in if you’re new to driving games. 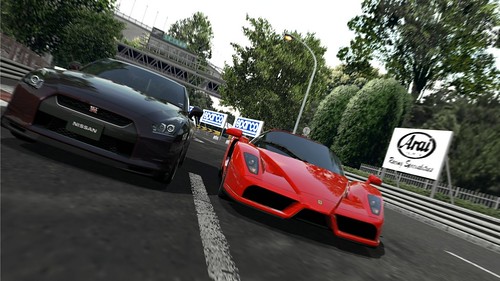 The visual presentation is one of the things that really makes this game stand out.  On the PSP, there were many racing titles, from Need for Speed to Midnight Club to ModNation Racers.  However, the PSP had some graphical limitations that would hold the games back from being on levels such as games like Gran Turismo 4 and Forza.  Polyphony Digital came through and showcased some very detailed visuals.

While you will see some occasional jagged edges on the cars and in the environments you’re racing through, there is a lot of detail that was put into each and every car that is included in this game.  Back when this game first released, the visuals were praised as being somewhere between the level that was used in Gran Turismo 3 and those used in Gran Turismo 4.  Each car is detailed, down to the logos on the hood and how the lights turn on when you brake.  Even stretched on the Vita’s screen, the cars still look detailed and the game looks good, visually.

As far as the game plays, though, you should expect some fair Load Times.  When going from one Game Mode to another, like loading a Driving Challenge or going into Single Player, expect to wait at least 7-8 seconds for the game to load the next screen, though actual races load fairly quickly, once you have selected everything you want for that race.

The Load Times are not unbearable and, as much as you may wonder, installing the Game Data doesn’t improve it.  That was a feature built to improve Load Times for the UMD Disc on the PSP, but not the Digital Download.

Gran Turismo for the PSP is one of the most visually stunning games for the PSP that can be played on the PS Vita.  While the game doesn’t have as many Game Modes, as its console counterparts, with more than 800 cars to collect, 45 tracks to race on, and 100 Driving Challenges, this is the most content you will be able to find in a PSP Racing game, and is a must-own for any Gran Turismo fan whom owns a PSP or a Vita.