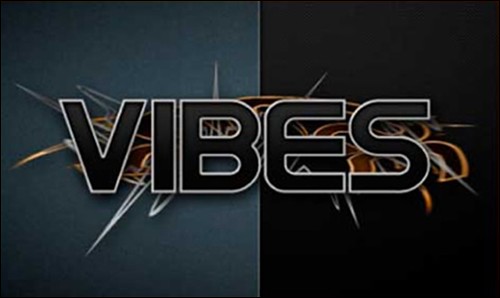 Ever since the PlayStation Mini platform had launched back on the PSP, it was to offer a lot of different types of games.  However, a lot of the games seemed fairly similar, mostly consisting of action and adventure games, than anything else.  Even the last PS Mini we reviewed, Hysteria Project, could be considered as an adventure game.  One thing that the platform needed was variety.  It did take some time, but variety did happen for it, with various types of games eventually coming to the near-200 games currently available for the platform.

There have been many genres that came to the platform, but there was a specific genre that still didn’t get a lot of love on it: Rhythm Games.  Rhythm and Music games have been loved by the gaming community ever since the explosion of Rock Band and Guitar Hero on the PlayStation 2.  Since then, music games have been highly used as casual little time-wasters when you’re not playing with friends.  Boot up a small game and enjoy some music while playing the game. 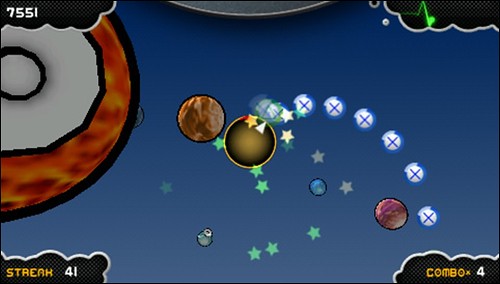 The biggest question here is this: Do Rhythm Games need to have a storyline?  Whether that is a yes or not, there is no plot or story for the game Vibes.  It is also at the point where there is no story to create from how the game plays, either.  There aren’t any scenes or environment explanations of any game.  You are just thrown into the game to play through the different songs in the style that the game incorporates into the game.

As with many of these games, it’s hard to rate a Story section when there is no story to begin with.  Vibes is definitely a game about the gameplay and music, rather than trying to form a deep and involved plot. 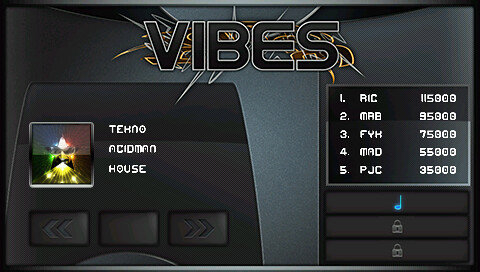 Vibes is a rhythm game that has you playing through various songs that are included in the game and matching button sequences to the rhythm, beat, and vocals of each song that is played.  When you first start up the game, the premise is pretty simple, as you only have one game mode to play in and only four options/menus from the Main Menu: Play, Settings, Credits, and Tutorial.

Before you jump into the gameplay for playing songs, you can watch the credits for all of the developers or go into Settings.  Despite your guesses, the Settings area is pretty basic, only offering two elements of the game that you can edit.  Those two are both volume controls.  One is used for controlling how loud
or soft the music is and how loud or soft the sound effects are. Here, there isn’t a whole lot to do and tinker with.

When you go into the mode to play through songs, you will have access to playing through a few of the game’s thirteen music tracks and must play the earlier tracks to unlock later tracks.  The game makes things a little easier on you since nearly half the track list will be available to you from the very beginning of the game, unlike games like Hatsune Miku: Project Diva, that require you to play the first song to play the second, and so on until everything is unlocked.

When you begin to play through a song, you will be taken to a colorful background with an Orb with an Arrow in the middle of the screen.  This is your controllable “character”.  As the song starts up and plays, there will be small buttons shaped like the Face Buttons on the PlayStation Vita system will move across the screen, towards this Orb.  They are also color-coded to help you know which button it is.

When one of the buttons reaches the edge of the Orb, you are to not only press the correct button, but also point the arrow in the direction the button is coming from.  This adds a little more to the point of the game, requiring you to both point the Analog Stick towards each button as well as pressing the correct button, which makes it a little trickier than a typical rhythm game.  With both notes that you have to press once and others you have to hold and follow for some time, the game can get really tricky.

As you complete songs, you will unlock others, though there isn’t anything past the 13 songs that are shown in the menu from the beginning of the game.  With only a single playing mode and 13 songs (across four difficulties) to play through, the game isn’t a really long game.  Playing through each of the songs once, the game will likely not take you much more than a few hours to unlock everything, though the game is definitely best used as a casual time-waster, if you like the tracks included.

Even being a PSP and PS3 title originally, Vibes won’t be control heavy.  For the most part, you will not be using the L and R triggers at all, but focusing more of your attention on the other buttons on the Vita.  As any other PS Mini, you can map any button you want to corners of the touch screen and the rear touch panel.  Along with this, you may also map buttons to the Right Analog Stick, if you so choose.

When you’re playing through a song, you will be using the Left Analog Stick to move the arrow within your Orb character to follow with where the current buttons are flying from.  You will also be using each of the four face buttons to select each option when a button comes and touches your orb and shows how well and on-time you made the button press.  You can also use the Start Button to pause the game.

The controls are very easy to get down, especially the fact that the face button parts of the song are literally displayed right on the screen when each button flies towards you.  It’s something you may not even need an explanation for. 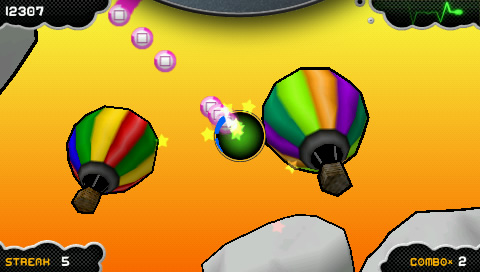 Visually, the game isn’t a whole lot to look at and worry about.  The game has a very black-mesh look to most of the menus, and the songs are mostly combinations of colorful background images that can range from Rock-On hand gestures to lips in the vein of the Rolling Stones logo.  These are all hand-drawn and, surprisingly, look just as nice on the Vita’s screen as on the PSP’s screen.

As far as audio is concerned, there is a pretty good amount of variety included in the game.  Most of the tracks weren’t anything that I, personally, recognized, but we’ve got a lot of variety going, from the symphonic Flight of the Bumblebee to Trance, Rap, and Rock music.  For a five-dollar game, thirteen isn’t a bad selection.

The main negative point is how the game plays.  While Load Times for the game are really quick, only taking a few seconds to load a song, actually playing the songs is where things can get ugly for you.  The games play just fine, but the placement of the buttons on some songs can be a large problem.  This is fairly apparent with the game’s first song, Hello by Fake Elegance.  You can tell the buttons are supposed to be right with the beat and the vocals, but they’re not.  They’re a split-second off balance from the music.

Vibes has a fair amount of music tracks in it and a large variety of music genres for you to enjoy.  While the game is fun in small bursts and has some pretty tricky difficulties to engage in, the fact that this is one of the more expensive PS Mini games and some songs don’t sync with their buttons can make this game very irritating to play.