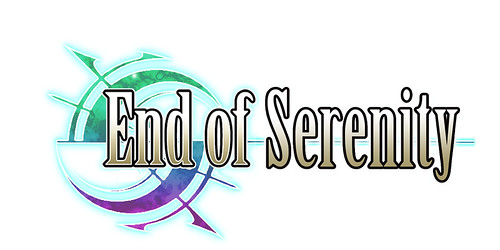 Nearly a month ago, the PlayStation Portable was officially discontinued by Sony Computer Entertainment Japan.  The PSP nearly had a 10-year run and its legacy lives on from within the PlayStation Vita.  Since shortly after launch, the Vita had been able to download and play select PSP titles that are available on the PlayStation Network, allowing Vita owners to experience and re-experience Sony’s first attempts at handheld gaming.

Just because the PSP has been discontinued doesn’t mean it isn’t getting new games, though.  Thanks to the efforts of Sony and many third party developers, there are some PSP titles that are still getting released onto the PlayStation Network, and some even have released this year, brand-new having never been released on the platform before.  To some, this would be baffling.  To others, an opportunity to bring more games to the Vita, or to those whom still own a PSP.

Thanks to the localization developer known for JRPG titles, XSEED, there was a brand-new PSP title that was released a little more than a week ago.  The game was from the developer Natsume as well as the developer Kemco, whom is known for developing RPG for Mobile platforms.  Originally known as End of Aspiration on Mobile, here is our review of the PSP title, End of Serenity.

End of Serenity takes place in a world that has been left in shambles from history in the past.  According to legend, long ago, a civilization known as “The Ancients” proceeded too far, technologically, by creating their own form of energy powered by items called Atomigems, and had the power to revive the dead.  Due to their ambitions, they incurred the wrath of the Gods and were wiped out, aside from ruins and ancient pieces of technology buried in the Earth.

In the present, a criminal organization known as “The Underworld” is organizing themselves around the world and seeking the Atomigems and awakening the technology of the Ancients for an unforeseen purpose.  A young trader by the name of Yute, along with a fighting orphan named Emil come together, along with others along the way, as they travel across the world to put a stop to the Underworld’s plans of reactivating that technology, afraid they will incur the wrath of the Gods once again.

The story of End of Serenity isn’t the greatest story for an RPG.  It’s very simple and to-the-point.  While there is some backstory for the main characters, there isn’t a huge amount of character development as you play the game for the entire party of playable characters.  It’s enough to be interesting and set the stage for the “Save the World” cliché of JRPGs, but it’s nothing that will move you.

One thing to note about the story, though, is that it was a pretty rough read on the Mobile platforms.  When Natsume brought it to the PSP, they completely re-did the translation and it’s a much easier read than it was before.  Many things have been re-named and cleaned up. 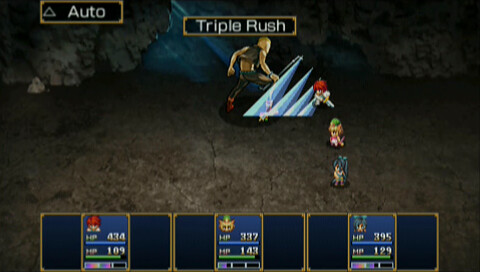 End of Serenity is a turn-based RPG in the vein of retro Final Fantasy games.  If there was something to directly compare it to, I would compare it to games like Chrono Trigger and Final Fantasy V.  The game features open-world progression, the acquisition of airships, as well as many towns and dungeons for you to explore as you play through the game.  Even the way things are drawn and shown are very reminiscent of the Super Nintendo Final Fantasy titles.

When you first begin the game, the perspective changes between characters, before they all come together to form the game’s party.  Your party will be shown on the screen at all times, whether you are in a town, dungeon, or exploring the World Map.  Each character has their own specific weapon, like Yute using a sword and Kaede using a Spear.  The equipment can be upgraded as most towns will house shops for weapons and armor.

Towns also house an Inn for recovering HP and MP (Magic Points used for Skills), as well as shops for accessories and skills.  Each character has two accessory slots that they can utilize for accessories with various effects, whether it be increasing stats or recovering HP or MP as you walk outside of battle.  Skills are also used extensively as they are special abilities and spells characters can use and cast within battle by using their MP.  Each character has their own set of skills to be bought as well as spells that can be learned by multiple characters.

When you’re in dungeons or the World Map, you will run into random battles against enemy parties.  These will take place on a different plane and will consist of turn-based combat, where a character will put in a command, like Attack, Defend, Skills, Items, Running, and more.  The commands aren’t timed, so you have as long as you need to decide what you wish to do.  There is also Auto-Battle available which will let the game automatically fight the battle for you with all of your characters only using physical attacks.  Once you win a fight, you will receive Experience to level up as well as money to use in shops.

Skills and Familiar Spirits are important for doing high damage in battle.  Skills launch special abilities and spells, whether they’re specific for a single character or can be used by many to damage the enemy, heal your party, or change stats, like increasing your party’s Attack stat or lowering the enemy’s Defense stat.  Familiar Spirits do similar things, though their attacks are much more powerful than most of the skills your characters will have.  They are Summons that can only be summoned once a bar fills up for each character after they fight for a few battles.

One thing to note is that some Accessories and Battle Skills, however, are not all obtainable in the base game.  Around the game, there are specific dungeons/towns that cannot be accessed unless they are bought with ESP Points from the Main Menu.  There are about 6 areas total that are like this.  These areas are great places for training your characters or for obtaining some pretty high-level skills and accessories early in the game.  However, obtaining ESP is on the hard end. 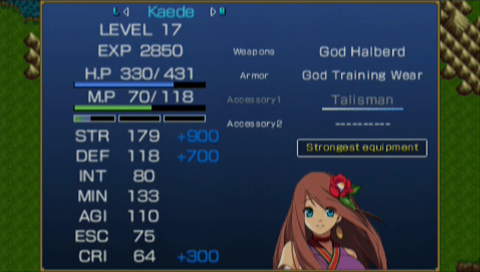 ESP is obtained by catching fish.  Whenever you walk by a pond, stream, river, or other body of water, you can see fish swimming and if they come by the shore where you are, you can pick them up, earning ESP in the process.  You only get one point of ESP, though, so it can take a lot of grinding to get enough, even to buy a single one.

You’ll need a good 500-600 ESP to buy all of those locations.  As an alternative, the game will take you to PSN so you can purchase these points, as the in-app purchases were in the Mobile version of the game.  While having to pay extra money to get access to those locations is a little off-putting, but the prices for the PSP version are cheaper than in the Mobile version.  You could buy the pack that’s about $10 and have enough to buy all of the locations, and a bunch of other stat-increasing items.  Though you do not have to buy any of these to complete the game.  It’s only if you want access to these areas.

A couple things to note about this game is that they are very nostalgic of the older RPGs, but it is very simple, and very short.  The game is pretty easy in that I only lost a party member a couple times throughout the game.  The experience count is pretty high as you progress through the game.  As long as you always upgrade your equipment and Skills in towns and fight all of your battles, you will find yourself leveling up in almost every battle you take part in and I found that I never had much trouble with any of the boss fights, including the Final Boss.

Apart from being easy, the game is pretty short.  To be able to get through the game, from start to finish, it should take you no longer than about 9-10 hours.  If you buy all of the ESP areas, expect it to be even shorter, as some of those accessories can help you tremendously.  If you utilize the equipment and skills from those areas, expect the game to only last around 8 hours.  It’s certainly a short game.  The battle system is loads of fun for fans of the genre, but it won’t be an incredibly long experience.

You will be using most of the buttons on the system, but not all.  Being a PSP title, the Right Analog Stick is not used at all.  Controlling your characters as well as cycling through the Menu is done with the D-Pad or Left Analog Stick.  Choosing commands and options is done with the X Button and cancelling out of options is done with the Circle Button.  The Triangle button is used for opening up the menu, and the Square Button is used for pulling up a map of where you are, whether it be the World Map or a Dungeon or Town.  The Start Button is used to pause the game, but Select, L, and R will not be used within End of Serenity.

All in all, it’s a pretty default control scheme for a JRPG like this.  It uses a lot of buttons, but shouldn’t be too hard to remember. 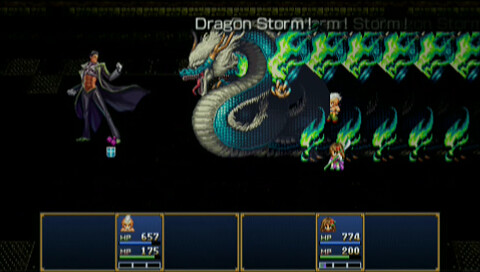 The visual presentation of the game is in a 2D sense, like the Super Nintendo RPGs that it is based on.  All of the visuals are 2D in a sense, including the various battle effects.  There are many RPGs out that have 2D visuals but 3D magical effects.  The effects in End of Serenity are similar to that, but mostly 2D.  I would directly compare those to the visual effects of games like Valkyrie Profile or Star Ocean: Second Evolution.  The models have some pixels visible on them, but it mostly looks colorful and smooth.

The audio presentation is one thing that should be talked about, though.  The game has some interesting music and a fair variety, from some more calming music when you’re exploring the World Map, and some exciting music for boss fights, but there’s not a huge variety to the music.  You will hear the same Dungeon Music from the first dungeon, second dungeon, and all the way to the final dungeon.  The Battle Music and Boss music are the same way.  The only boss that has their own music track is the Final Boss.

As far as how the game plays, it plays well.  Load Times are very short, only taking a couple seconds to go from area to area and for loading battles.  This is right on bar with how the Mobile version of the game performed.  It was ported over to the PSP platform very well, although not a lot of improvements were made, other than the story translation.

All in all, End of Serenity makes its way over to the PSP and PS Vita with a lot of nostalgia thrown into the mix.  While the game only lasts about 10 hours, and has a lack of variety of music tracks, it is sure to please fans of retro turn-based RPGs.  The translation is worlds better than its original incarnation and the battle system is a lot of fun.  Any JRPG fan should definitely look into this.

The PlayStation Vita Review Network Rates End of Serenity a 7.5/10

571 thoughts on “End of Serenity Review”