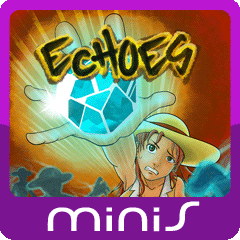 When PlayStation Minis first launched, they were simply “PSP Minis”.  Despite the fact that they are available on the PlayStation 3 as well as the PSP and PS Vita, they were meant to be a portable experience.  As such, they are full of games that emphasize less on story and more on bite-sized bits of gameplay, much like Mobile games.  In regards to that, there are some Mobile games that got ported to that platform, like Angry Birds and Zenonia.

As such, they are very visually-light games, much like some early games done by Indie developers.  They’re bite-sized games for bite-sized prices that are meant to be little time-wasters, rather than deep experiences.  There are many bite-sized experiences available on the platform as well.  The last Mini we reviewed, Hysteria Project, was a thrilling experience, but it also was bite-sized, being able to be completed in as little as 20-30 minutes.

Among the earlier minis, there were games that were exclusive to the PlayStation Mini software, like Echoes.  Echoes was a game that was unique that it came at a time where most of the Mini titles around were very unimpressive.  While Echoes didn’t win any major awards, it definitely caught the eye as being one of the cheaper Minis.  As one of the Minis available on the PS Vita, here is our review of the top-down game, Echoes. 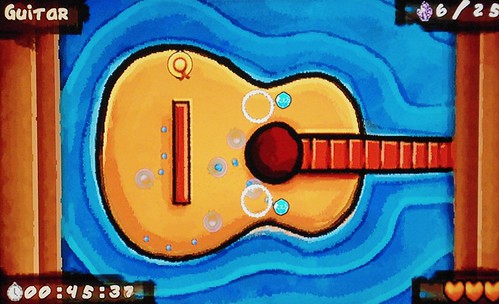 Echoes is one of those games that doesn’t really have a storyline attached to it.  Much like games in the early NES era, it has a plot that is more assumed than anything else.  You simply start the game up and are shown an explanation of what objects and characters on the screen are and what to do, without giving out a detailed plot or story revolving around the main character and the enemies whom oppose her.

Echoes is a game about a young lady adorning a large flower hat, whom is traveling the world in search of crystals.  The goal being collecting these crystals and what their power is is quite unknown, but it is clear these crystals either do not wish to be found or are protected by some sort of curse, creating ghostly “echoes” of the young heroine as she collects them, as if trying to stop her from collecting more. 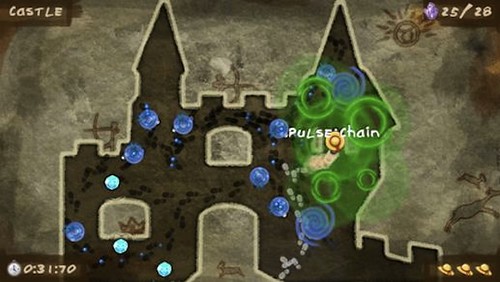 Echoes is a top-down game, where you are controlling the young heroine, only seeing the top of her flowery hat, as she travels the world in search of magical crystals.  The game is set in stages as well as four different game modes for you to play through, one of which is already unlocked when you first boot up the game.  These game modes, filled with stages, are Arcade Mode, Jackpot Mode, Survival Mode, and Clockwork Mode.

Arcade Mode is the only mode available from the start and is the main “campaign” of the game.  This consists of four worlds, each containing stages.  Unlocking new stages and worlds requires clearing prior stages.  Playing through Arcade Mode will also unlock the other game modes as well as stages within those modes, so proceeding through Arcade Mode should definitely be the first order of business when you start up the game to start playing.

The other three game modes are similar to Arcade Mode, but have fewer stages and have their own twist to playing them.  Jackpot Mode is the most like Arcade Mode, allowing normal progression through each stage, but the crystals you collect are worth more points the more you collect in a row without being harmed by the echoes roaming the stage.

Survival and Clockwork Modes are a little bit harder than these, as they have very strict restrictions put upon them.  Survival Mode has you collecting crystals in stages with only a single point of health.  The point of this is to collect as many crystals without getting hit a single time.  Clockwork Mode is similar in that you cannot get hit at all or the stage will be over.  But, Clockwork Mode gives you a time limit, encouraging you to move as fast as you can.  This could be 30 seconds or even a measly 10 seconds.  These modes require much more quick-thinking than the other modes.

Playing through each stage of the game has you on a 2D plane where you may roam around freely.  As you are on the stage, there will be crystals for you to collect and a total number of crystals you must collect to clear the stage.  When you move and gather a crystal, it will be added to your total and then another crystal will appear for you to collect.  The trick is that every time you collect a crystal, an echo will appear and perform every move you made before you collected that crystal.  So if you ran all across the map in a zig-zap formation before collecting the crystal, that echo will do the same, over and over again.

The trick is to be able to minimize movement so that the echoes you create will not be hard to avoid.  Touching one will damage you, and take away a piece of your health.  You only start with 3-4 pieces of health, so you don’t have much room for error.  This can get pretty chaotic in some of the later stages when you could have 10 or more echoes wandering around a small stage at once.  While there are some power-ups you can collect and do, like increase your health, eliminating echoes in the area, or stopping time, it can get pretty hectic if you’re not careful.  The game encourages you to think ahead and place each movement carefully.

The difficulty of the game doesn’t spike to hair-ripping levels, but it’s enough to keep you on your toes throughout the game to clear stages, especially those with more narrow pathways for you to traverse through.  The game definitely sounds simple, but it can get pretty tricky pretty fast.

As far as length is concerned, there are more than 40 stages to clear in all, counting Arcade, Survival, Jackpot, and Clockwork Modes.  With each stages taking between 15 seconds and a minute, the game can be beaten in less than an hour, if you know what you’re doing.  There are also some trophies (in-game) to collect for finishing stages under certain conditions.  The game won’t last a really long time, but if you use it for bite-sized gameplay sessions, it can certainly appease your boredom for quite awhile with only taking up a measly 23 MB of space.

Controls for Echoes are pretty light.  Despite being developed for the PSP, which has almost the same number of buttons as the PS Vita, you will only really be using a few buttons as you play through the game.  As always, you can map buttons to the touch screen, but that is not necessary for playing through Echoes.

Moving the heroine through stages or through the menus is done either with the D-Pad or the Left Analog Stick.  This is really all you will need for the majority of the game, as the stages don’t utilize any other button commands, but pressing Start to pause the game until the stage is over.  While the face buttons are used, they are used very lightly.

The X button is used for confirming an option in the menu when you end a stage, normally to back to the Menu so you can choose another stage to play through.  The Circle Button can be used in the menus as well, as a quicker way to move back to the previous menu, if you want to switch game modes.  The Square Button is also used at the end of a stage, in case you would like to replay that stage, and the Triangle Button is not used.  The Select, R, and L buttons are also not used in the game.

Echoes is a very lightly-controlled game.  For all intents and purposes, you may be able to go through the game by using nothing but the D-Pad and the X Button. 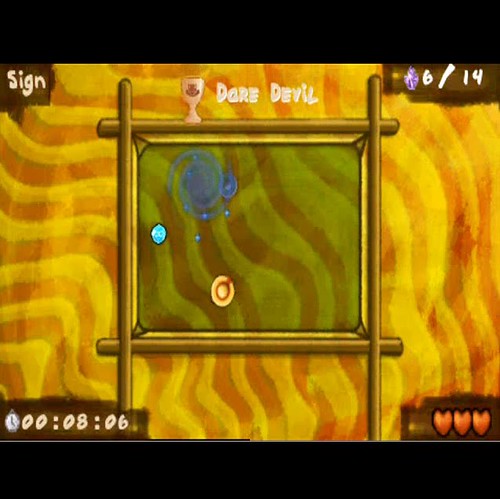 The visual presentation of Echoes is unique for the PlayStation Mini platform, because there aren’t many other games that use the design that it uses.  When you play through Echoes and look at the environments, they look as if they were all hand-painted with water-colors.  While the heroine and echoes look a little more animated than this, the environments look very artistic.

This is shown even more in the more detailed stages.  There are small splotches of pain along them, and there are different shades and shades flowing into shades.  It has a very authentic look to it, like someone had actually made this on paper rather than making it through an animation PC program.

The way the game plays is mostly good as well.  Load times are very short, only taking a couple seconds to load up a stage, and the game flows very smoothly.  There is no lag or delay in the game as you play through the game, and everything runs quick and fast, like a Mobile or Flash game would.

The only downside to the presentation is Auto-Saving.  The game is set to Auto-Save progress as you play through the game.  This mostly goes without a hitch, but every so often, the game will bring up an error message, saying that the Memory Card has been removed or changed and will require you to manually save the game again.  This isn’t a huge issue, but a small annoyance, and it happens often.  I played it for about 15 minutes this morning, and the error popped up at least 3 times.

All in all, Echoes is a fun little bite-sized game if you’re itching for something with a bit of casual challenge attached to it.  While it does have some issues with Auto-Saving content and there isn’t a lot of content to play through, Echoes is a very unique and charming experience you won’t find anywhere else.  If you want bite-sized gameplay, it’s worth a look.