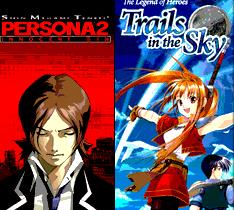 Today is a busy day for us.  We have posted a new review, and it’s time to announce our very first game giveaway for the Europe regions!  We have tried to acquire EU game codes for giveaways before, but it has proven difficult.

As a sort of celebration to Tymek joining our writing team, he has set up our first EU-region game giveaway.  If you have noticed from our Twitter Feed, there is a Tweet out there to showcase that we have a giveaway starting today that will last until this Thursday, June 26, 2014.

The 3 codes we will be giving away are for two PSP role-playing games in a single pack: Persona 2: Innocent Sin and The Legend of Heroes: Trails in the Sky.

Follow and retweet THIS tweet in order to be entered in the giveaway! It will run untill 00:00CET on June 26th. Good luck everyone! (3/3)

The giveaway began several hours ago and has been a huge success already, gaining more than 40 entries.  If you are interested in entering the giveaway, head over to Twitter and Retweet what Tymek has sent out from our @vitareviews feed!

Good luck to all!