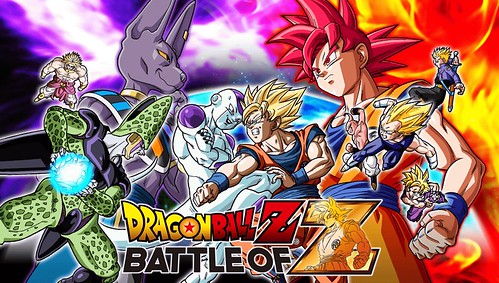 The series has taken an interesting turn with its newest game.  Having released on the Xbox 360, PlayStation 3, and PlayStation Vita, the newest game is called Dragon Ball Z: Battle of Z.  What’s interesting is that it took the 3D elements of Tenkaichi and really made a unique game for the franchise, as well as including characters from the recent “Battle of Gods” movie.  A digital-only release in North America, here is our official review of Dragon Ball Z: Battle of Z. 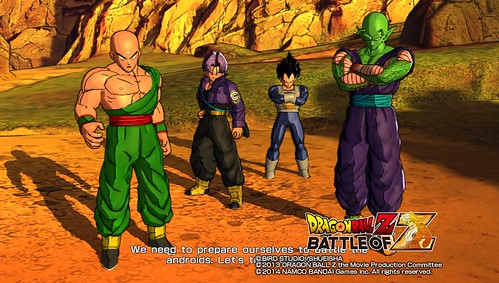 The story of Battle of Z is more than a mere question of “What is the story of the game?”  It’s more like “What is the story of the anime?”  Battle of Z has a lot of edits and twists to the story, but it takes you from the beginning of the series to the end of the series.  It follows the exploits of the “Z Fighters” Goku, Gohan, Piccolo, Vegeta, and more as they are faced with saving the Earth multiple times from powerful fighters from the alien warlord Frieza to the Android known as Cell and more.

Battle of Z’s main story will take you through the Saiyan, Frieza, Android, Cell, and Majin Buu sagas of the anime, which is the entirety of the original anime.  Apart from this, there are also many optional missions from the same Sagas and from “Another Age” and “Extra Age”, which construct most of the Dragon Ball Z anime movies that were made.  This is from movies like Cooler’s Revenge and Broly, The Legendary Super-Saiyan, and even the newest movie, Battle of Gods.

The story segments in Battle of Z are very much different than the ones fans will already know from the anime.  Many things are changed to fit the way battles are set up, such as justifying a four-character party fighting against Great Ape Vegeta in the Saiyan Saga.  The events are also not in-depth to explain the story.  It is advised that you have already watched the anime before playing this game or you will be very confused with how things play out. 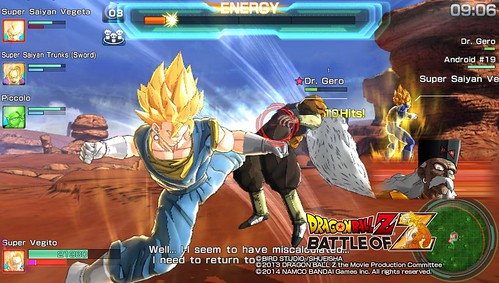 Dragon Ball Z: Battle of Z is a mission-based fighting game.  As such, you will be at a Main menu whenever you start, where you can choose to go into Single Player, and more game modes can be unlocked the further you progress into the game.  There will be Co-Op and Battle Mode that you can unlock to participate in.  At the start of the game, though, you will only be able to go into Single Player, which is the Story Mode, and Battle Mode.

Single Player is where the bulk of the game takes place.  This is where you can progress through Story missions as well as Extra Missions to progress through the story and unlock content, such as stages for Battle Mode or Playable Characters.  Generally, each Story Mission will have some character, stage, or both that can be unlocked by doing well in that mission and getting a high rank.

From here, you can also access a few other things, such as the Item and Premium Shops.  In these shops, you can use points earned in fights to buy Items and Cards that you can equip to a character for taking part in a mission.  Items can be anything, such as Senzu Beans to revive you from a K-O in the middle of a fight, giving you a second chance to complete a mission.

Premium Collection is a little different.  This contains cards you can equip to characters to help enhance their fighting ability.  This can increase damage that certain types of attacks do, increase their maximum health, or give them special effects, like reducing enemy stats whenever you hit them with melee attacks or giving you a bonus when you land certain types of attacks.

Cards and Items are crucial to you as you progress through the game.  As you progress further and further through the Story, each mission will start to get harder and harder.  You will need to constantly be getting and enhancing your characters’ builds for missions to become easier.  Once you get into the Frieza Saga, the game can become very hard if you haven’t explored Cards and, especially, Items.

Battle Mode is a multiplayer-only mode, where you can join free-for-all battles and duke it out with online or local opponents.  Also a multiplayer-based mode, Co-Op is the most active of the two modes.  Co-Op allows you to join and assist players with Story Missions they’re having issues with.  When the game first came out, this was a very active mode as there were lots of people having issues with Story Missions and many players are around to join and assist.

The actual missions and battles take place within large 3D environments.  These are all set in locations in the Dragon Ball Z universe, from Planet Namek to The Cell Games Arena.  These are large, much like those from the Tenkaichi games.  They are filled with destructible objects, such as cliffs, buildings, structures, and more.  All of these structures you can also fly to and land on.  There is complete free roam throughout the environments and they are quite large. 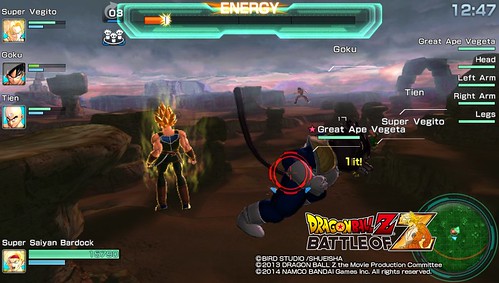 Within the free roam, you will be controlling yourself in a party of 1-4 characters against a team of 1-4 characters as you guys duke it out in a Team vs Team battle.  You can lock onto enemies and fly towards them as you can freely raise or lower your height at will and fly or run across the battlefield.  Once there, you can use a melee combo attack all controlled by a single button or use button combinations to perform special attacks that consume energy.

Each character has four special attacks, plus an Ultimate Attack, and each requires a different amount of energy.  Energy is gained over time, by attacking the enemy, or given to you by allies.  The games has a lot of ally-supported features in it.  When an ally is knocked out, they can either be revived with a Senzu Bean Item equipped or by another ally moving to them and reviving them.  The same goes for you.  When you get knocked out, you either use a senzu bean or hope an ally comes to revive you in the few seconds you have before the mission fails.  You can also give energy to an ally low on energy.

This continues on and has some other features, like combination attacks where you and the rest of your party can attack an enemy together if the timing is right, or chase fights where your ally can launch an enemy and you can follow-up by entering a button command and teleporting to the enemy for a finishing blow.

This combat can seem very chaotic at times, though the way it is played and the length of the battles is part of what makes the game unique.  This is a Dragon Ball Z fighting game, but the way it plays doesn’t feel like a fighting game.  With how battles progress, the game feels more like a fast-paced action game.  This is one thing that many fans have criticized as it doesn’t feel as much like a fighter as previous titles.

Missions can have certain objectives or options for objectives.  For example, the first mission you have against Frieza’s Final Form, you can either survive the battle for 3 minutes or defeat him in that 3 minutes.  If you defeat him, you get better unlockable content than the former goal.  Some missions are just to defeat enemies, though some do have that little twist about them.

At the end of a mission, you will be graded based on how well you did.  The ranks go up to S, SS, and even Z.  The higher the rank, the better your spoils are, with points, cards, experience for you and your allies (which increases their rank and AI intelligence), and unlockable characters and stages.  It is generally a goal to do well, as some of the high-rank characters you can unlock make Story Mode progression much easier, especially if you don’t buy the DLC Characters (SSJ Bardock and Super Vegito) from PSN.

With 60 missions to complete along with Co-Op and Battle Modes, there is a lot of game here.  For the Main Story Missions, the game should last you about 9-10 hours, while adding a good deal more if you get into the Co-Op gameplay and play with your friends.

Controls in this game are not what a Dragon Ball Z veteran will be expecting.  This is because you will not be performing technical button combos like in previous games.  There is only one button for melee attacks and the rest are button combinations for special attacks.

The touch screen is also used here.  Pressing a corner of the touch screen will allow you to lock onto one of your allies to give them energy or to move to them and revive them.  Otherwise, touch is at a bare minimum.

The control scheme isn’t too technical, but may be different than what gamers are used to with 3D Dragon Ball Z games. 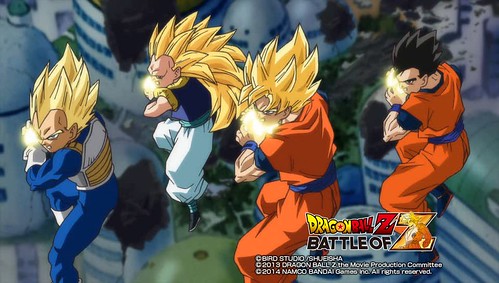 Presentation has its highs and lows with this game.  First of all, the visual presentation looks really nice.  If you look really close, you will see that there are some breaks in the character models, but overall, the cell-shading was done really well.  All of the environments look near-perfect and you can see the sheer size in them, especially in battles with Giant enemies like Great Ape Vegeta or Meta-Cooler.

How the game plays, though, is taken down with Load Times.  While the game plays flawlessly, even in multiplayer, the game has some hefty Load Times.  When you’re loading up a mission, expect to wait at least 15-20 seconds for the mission to load.  It could be seen as worth it, based on how nice the game plays, but it is definitely a long wait.  I find myself putting the Vita down for awhile while missions load, which shows how long they are.

Battle of Z is a very different take on a 3D Dragon Ball Z fighting game.  Fans of the series will either love or hate the changes it makes, but with more than 10 hours of content to explore, fun multiplayer modes, and being the only fighting game to include the Battle of Gods characters, it is a game worth downloading for Dragon Ball Z fans and fighting game fans alike.