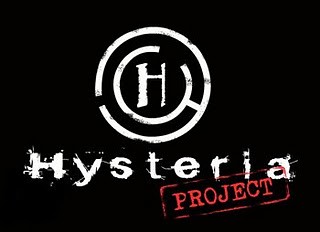 One library that is often overlooked, though, is the PlayStation Minis platform.  These were bite-sized games made initially for the PSP and were eventually enabled for the PlayStation 3 and PlayStation Vita.  They were small, Mobile-like games.  They were short adventures and normally weren’t too graphic-heavy.  In essence, you could call them a precursor to what eventually became PlayStation Mobile.  There are still a lot of PS Mini titles out on the store to download, though.

Even we at the PS Vita Review Network, have overlooked many of these.  To this day, we have only reviewed 3 or the 187 available PlayStation Mini titles.  While all three have been good games, we need to step our game up and get more out there.  With our current goal of getting at least 10 reviews of each game type up on this site, it’s time to start working harder on PlayStation Minis.  Originally a Mobile title, here is our review of the PlayStation Mini Survival Horror title, Hysteria Project. 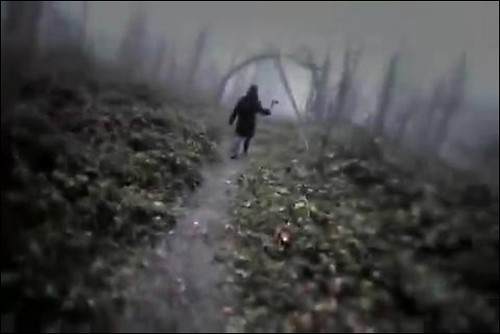 Hysteria Project has a plot, though it isn’t explained to you when you begin the game.  As much of a plot as needs to be conveyed is that you start out in a room, tied up with duct tape around your wrists and legs.  It is shown that someone has allegedly kidnapped you and thrown you into this room to come back and kill you later.  Your name, their identity and everything else is not explained but for a strange emblem of an “H” around your wrist and appearing wherever you look.

The plot of Hysteria Project does have backstory, other than you being kidnapped and having to try to escape your killer.  There is a plot of an experimental science project and more, but you don’t get the backstory until after you’ve beaten the game and the game gives you the backstory files to read through.

The story of Hysteria Project isn’t fantastic, but it is definitely confusing as you progress through your escape from the killer and see strange things, like the visions of the “H Emblem” and strange, paranormal things around you and the axe-wielding killer that is chasing after you throughout the entire game.  Even with the backstory files, there are a lot of strange questions surrounding the game. 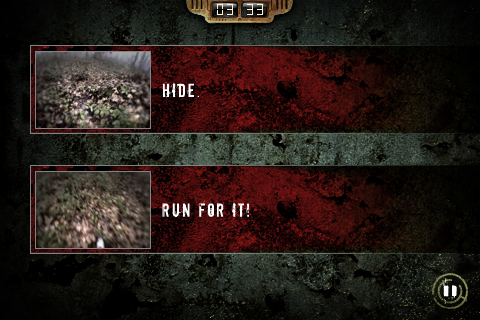 Hysteria Project is what you may call a Full-Motion Video, or FMW Game.  What this means is that the gameplay engine used for the game doesn’t consist of any Computer-Animated character models, effects, or environments.  Everything you see as you travel through your escape is captured in real live-action video.  A real person filmed it and real people play parts in it.  You could think of it like an interactive movie, so to speak.

The game progresses with a first-person perspective, showcasing you looking at your surroundings and making choices to try to get away from the killer that is after you.  This starts from a simple choice of either finding a sharp object to cut open the tape that binds you, or simply undoing it yourself, or could be a choose of turning left or right on the forest path you’re running on.  You also only have a certain number of seconds to make a choice.

Making choices is where most of the game part of Hysteria Project takes place.  There are many branching paths to the progression, but only one correct path.  If you make the wrong choice, you will end up getting a game-over, whether that be from the killer catching up to you and slicing your head in half with his axe, or tripping on one of the many traps he has laid out in the forest surrounding the cabin where he held you captive.  When you do get a Game Over, you can just retry the choice again, so you don’t have to worry about starting over, but choosing the right option is key to winning the game.

The game was originally a Mobile game, so the game doesn’t last a really long time.  With a certain margin of trial-and-error, Hysteria Project should take you about 30-50 minutes to complete in one play through the game.  This is assuming you do have some trial and error with making incorrect choices or not putting in the correct button combinations when you’re trying to navigate around traps.

Controls for Hysteria Project are very simple.  Since PlayStation Minis came out before the PlayStation Vita was around, there aren’t any touch controls available to you.  Being a game that uses the same Emulator that the Vita uses for PSP games, you can redirect buttons to corners of the touch screen, if you want to play it that way.  Though there are so few controls that you may want to just leave things the way they are.

Hysteria Project only uses a few buttons on the Vita’s system.  You will be using the D-Pad to navigate through each menu, whether it be the Title Menu where you’re choosing a new game or looking at the Credits, or cycling through options when you have to make a quick decision during your escape.  You can choose one of these options with the X Button or go back with the Circle Button.  X and Circle are also used when you’re navigating traps and have to follow on-screen button prompts.

The Start Button is also used, mostly for returning to the Title Screen from the gameplay area, though not stopping after an auto-save point will make you lose progress.  Otherwise, the rest of the Vita’s buttons aren’t used.  So, it’s a very simple game to control. 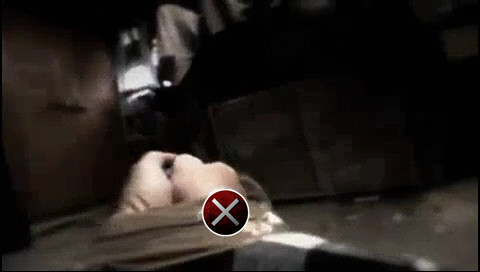 Presentation is pretty important for Hysteria Project, as this is where most of the low points of the game take place.  While the visual presentation does make the game pretty unique, this is more-so when the game is played on a PSP system, rather than a PS Vita system.  When Hysteria Project is stretched on the Vita’s screen, the visual quality goes down a noticeable amount.  While this is a “Blair Witch” like camera experience, most movement is blurred out quite a bit when playing on the Vita.  We played this on both systems, and the Vita’s screen making it blurred makes it hard to keep your eyes concentrated on the screen.

The game plays well enough, cycling to and from each set of choices without much time and without skipping frames or being jumpy.  The Load Times are an issue, though.  Every few choices, the game pulls up a “Saving Game” screen.  Normally, these only take 2-3 seconds to do.  However, the game hung and froze at these screens a few times when we played the game, requiring us to put the system in Sleep Mode and go back in to get the game to resume and go to the next set of choices.

Aside from these technical hiccups, the game does provide a pretty decent creepy atmosphere.  If you play in the dark with headphones in, there are some jumpy scenes that can make you jump.  Not a whole lot of them with how light it is when you’re running through the forest, but a few.

Hysteria Project is a very unique experience that hasn’t been a major part of the gaming industry since the early days of SEGA.  While the presentation took a hit when stretched on the Vita’s screen and there are some issues with the game freezing/hanging when saving data, it’s a unique experience that any horror fans may want to look into.