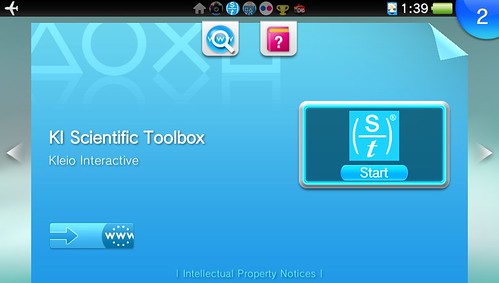 This review was requested by and is dedicated to TK.

PlayStation Mobile has been bringing apps to the Vita for quite a long time, and many of them seem very simplistic in nature.  Granted, there are few big developers that work on that service, other than Sony, themselves.  PlayStation Mobile development teams are more similar to teams around Indie Games.  They are very small teams, and some of them are even just a single person making games and applications for that platform.  It’s a tall order and that is likely why many PS Mobile apps are simplistic in nature.

Regardless, there are a lot of apps that come to the Vita, thanks to PlayStation Mobile.  Not even two weeks ago, one of those small development teams brought a Tumblr app to the Vita, which was a big step forward.  Apart from this, there are simple apps, like calendars, timers, weather, calculators, and more.  Most apps are only a single feature, though.  Many apps are only a calculator or only a timer or only a calendar. 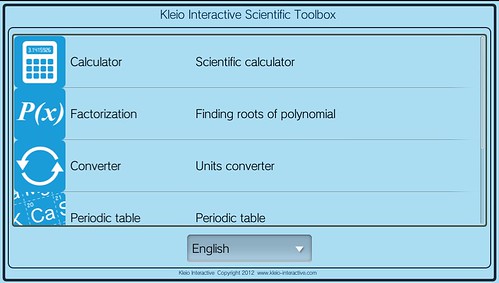 Functionality is an important part to any app as it is what, exactly, the app does.  It is also the most impressive part of the Kleio Interactive Scientific Toolbox is how much it does.  The app isn’t just one thing, like a calculator.  It’s a lot of different things.  That is where the biggest appeal to the app is that it’s a huge collection of different scientific reference tools.

The Scientific Calculator portion is much like the Scientific Calculator on a Windows PC.  It has the normal number pad for the basic operations as well as options for different functions like squaring numbers and more.  The Factorization area is similar to this, but showcasing numbers as well as letters for putting in mathematical functions for the application to perform.  This is pretty deep stuff that only someone deep in math would need.

The Unit Converter is like finding how many ounces are in a cup, but much more lengthy.  There are a lot of different options within this.  Liquid, Length, Time, etc.  Just about any form of measurement you could ever think of is included here.  There are dozens and dozens of different things you can convert with this application.  The Periodic Table is also pretty extensive.  It’s the normal Periodic Table of the Elements, but you can also open each individual element to show its elemental category, group, period, block, atomic weight and more.

The last two sections are tables showcasing constants that may be useful to know.  In the Mathematical constants, you will see entries for constants such as Pi and other values.  In the last section, the Radiation Dosage, it showcases more than a dozen different things you may be exposed to as well as showing what is more dangerous than others, as far as being close to a radiation plant, Dental X-Rays, and more.

The last thing to note is that the app can be set in two different languages, English and French.  It is automatically set to French, so you may need to choose the language option upon booting it up to switch it over to English to understand what it says, assuming you cannot read French.  But, with all of this together, there is a lot of content here to explore and use.  Whether you need to convert units or perform mathematical functions, there is a ton of content crammed into this app. 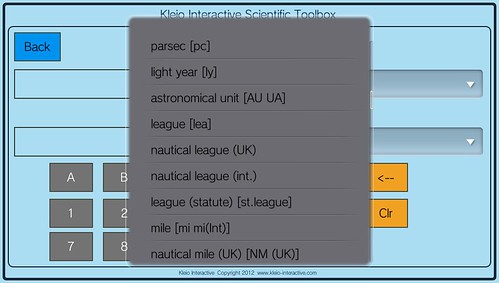 The Design of an app is important, and it is especially so with an app that is crammed with as much content as this one is.  When you first boot up the app, it will take you to a menu of options that you can scroll through.  This has an option for each of the six reference tools that are contained within, and each of them is a large option to easily be tapped with your finger.  Because of this, not all of the options can be shown on-screen at the same time.  The Box in the middle containing the six options only shows four at a time and must be scrolled through to see the other options.  The Language option at the bottom of the screen is always there, though, and doesn’t need to be scrolled through.

When you open up each of the six options, some of them have to be scrolled through and some do not.  When you pull up the Scientific Calculator, Factorization, and the Periodic Table of Elements, you don’t need to scroll down to view all of the information.  However, when you pull up an element on the periodic table, it is set in several pages for you to scroll through, requiring you to scroll with your finger.

The other three options also require scrolling.  When you pull up the Mathematical Constants and Radiation Dosage, they are set as long lists for you to scroll down through.  The Unit Converter is shown on-screen, but if you want to change what type of elements and what elements you want to convert, you have to scroll through a pretty long list to be able to find what you may want.

While each of these things do require scrolling, the text and buttons are all very large to allow for easy reading.  The design isn’t as convenient as possible, but they did make it convenient to cycle through. 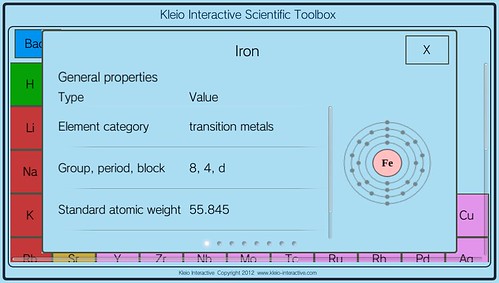 The initial load time for the app is about 9-10 seconds, which is very good for a PS Mobile app.  Most apps take a good 15-20 seconds to boot up, so being able to boot to its Main Menu in a mere 10 seconds is quite the accomplishment for Kleio Interactive.  While that Load Time still is a good while to wait for it to come up, its on the low-end for a PS Mobile app.  Once you get through that initial load time, the waiting time for going into each section is very minimal, taking only a couple seconds to load.

While everything flows pretty well when you’re trying to scroll through menus within the app, there is a bit of a negative side to actually selecting options in the app.  If you press on a button with your finger, it will take about 1-2 seconds for the app to recognize and perform the command.  This shows a bit of lag with doing each command that you can do, whether it be selecting an element or putting a command in the calculator.

KI Scientific Toolbox is one of the most in-depth application on the PlayStation Mobile platform.  Sporting some pretty extensive scientific and mathematical reference guides from a calculator to the Tables of the Elements to Radiation Dosage guides, there is a lot to be used here.  While there is some lag when choosing options once you get the app loaded, you won’t find anything else on the platform with this much content crammed into one app.