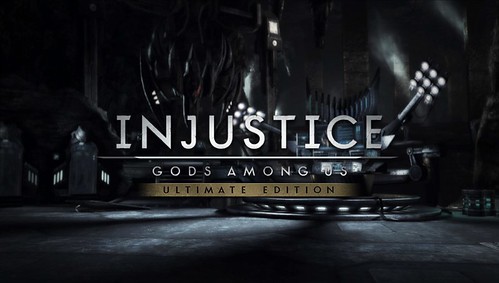 Today is a special day.  Not only are we having a giveaway today, but we are also reviewing the game we are giving away!  We hope that this is something that our followers enjoy.  We thought it would be a neat idea and we may do it more often in the future if this goes over well.

There are a lot of different genres of games available on the PlayStation Vita.  There are some genres that have been around since the beginning.  If we think about the games that launched on the system, there was a lot available.  Exploration and Platforming with Uncharted: Golden Abyss.  Open-World Action with Gravity Rush.  But another genre has really been expanded upon.  Fighting Games.

Fighting games have been around for a long time, and the PS Vita started with Ultimate Marvel vs Capcom 3.  If anything, the Vita has a lot of fighting games.  PlayStation All-Stars Battle Royale.  Street Fighter x Tekken.  Mortal Kombat.  BlazBlue Continuum Shift Extend.  There have been many fighters coming to the system and one unique fighting game that came to the Vita was something that both comic fans and fighting fans could greatly enjoy and in its “ultimate” form.  Here is our official review of Injustice: Gods Among Us Ultimate Edition for the PlayStation Vita. 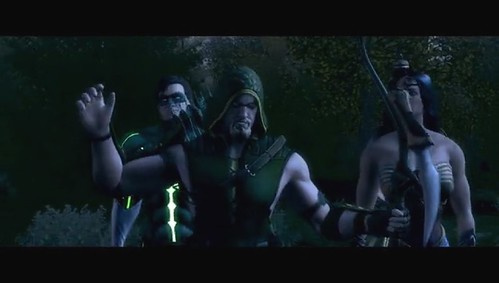 The story of Injustice is based on the Injustice Comic Book series by DC Comics.  It begins with Metropolis in an alternate dimension being destroyed by a drugged Superman.  As a result, he goes into a rage and events unfold to tear apart the Justice League and antagonize Batman.  The situation worsens and Batman seeks to use technology to reach out to other dimensions and pull some assistance to help him incapacitate Superman and stop his world-conquering regime.

The story of Injustice is good in a few ways.  The first is that the story brings together a lot of DC Heroes and Villains together in one story that flows together well.  Among playable characters, you will see the likes of Batman, Superman, Wonder Woman, Green Lantern, Green Arrow, Aquaman, Killer Frost, Doomsday, The Joker, Lex Luthor and more.  Seeing all of these characters come to life in the story’s scenes really treats a DC Comics fan well, especially with the lack of DC-based movies around, outside of Batman and Superman.

There is also a certain element that Injustice holds that other fighters don’t.  Playing the game’s story mode is like watching a long movie.  The game does have a fairly deep combat system, but has a really large emphasis on storyline.  This enables the game to be good for not only fighting fans, but people who love DC Comics.  Crank the difficulty down and you can enjoy a casual session of watching a CG-animated DC movie. 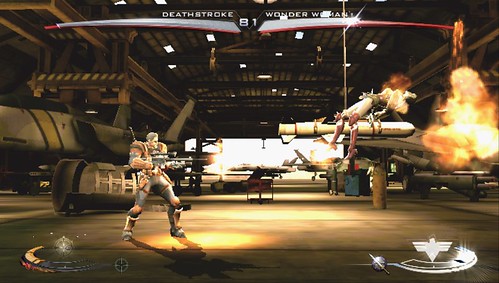 The gameplay of Injustice is that of a 2D fighting game.  While the character models are 3D, as are the environments and everything around you when you’re in a stage, the perspective is 2D.  This is the same style of fighting game that a lot of games have done in recent years.  The PS Vita has notable ones, much like Ultimate Marvel vs Capcom 3 and Street Fighter x Tekken.  It’s similar, but Injustice does have a few quirks and tweaks, like environments that can be interacted with, which we will touch on later.

When you first boot up the game, you will be able to either go through a tutorial for learning the various controls of the combat system, or you can skip it and dive straight into the game.  Once you can do that, you can either go into Story Mode or the various other modes.  These modes consist of multiplayer, Free Play, or the S.T.A.R.S. lab.

Story Mode is separated into chapters, each based on a specific character, whether it be Batman, Lex Luthor, or Green Arrow.  Each chapter consists of scenes that flow into fights as you control the characters that the chapter are around.  For example, the chapter could start with Batman duking it out with Death Stroke at Arkham Asylum and lead into him aiding the Titans at the Watch Tower against Bane and Lex Luthor.  There are chapters for about half of the total roster, mostly heroes, as you progress through Story Mode.

Free Play allows you to go into a fight against a CPU from characters and stages of your choosing.  At the game’s start, you will have access to all 30 playable characters.  Since this is the same Ultimate Edition that is on the PS3 and PS4, you will also have access to all of the game’s DLC characters, from a 1960s-inspired Batgirl to the Mortal Kombat guest character, Scorpion.  You can choose whatever character you want to be, along with their costumes and the stages for the game, from Wayne Manor to the Watch Tower.

There are many elements to the combat.  You will be able to combo your attacks together, but you can also interact with stages.  Every stage has something you can interact with.  Whether it be a motorcycle to drive into your opponent or a platform to use to dodge and jump over your opponent.  Most stages also have sections.  If you’re at the edge of a stage, you can launch your opponent through a cinematic into another part of the stage.  The stages have a lot of elements that interact with you and your opponent that are part of a strategy when you’re fighting. 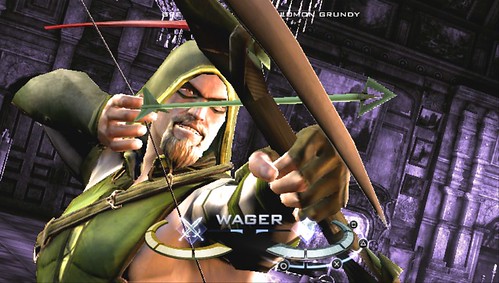 The S.T.A.R.S. Lab is something new to Ultimate Edition, although the Vita never had the original version of Injustice.  This is a set of missions that require certain objectives.  This could simply be fighting opponents as you chase after a villain or fighting as Superman and having to stay in sunlight areas to maintain your energy.  There are 300 missions total, which really extends the value of a purely single-player portion of the game.

The final part is Multiplayer and Multiplayer Profiles. Unfortunately, the game does not have cross-play, so you will only be able to fight with other players with the Vita version of the game.  Multiplayer Profiles are tied to your Hero Card, which can be customized with unlockable content as you play the game and increase your rank from experience you get from completing missions and fights.

There are two different types of multiplayer.  You can use Ad-Hoc Mode to play against friends in the same room with a Vita , or you can use Wi-Fi to battle players from around the world.  There are Ranked Matches, Open Matches, and Private Matches to take into account.  There is also a fairly decent community for the game.  When the game had first come out, I could never find any multiplayer matches.  I could let it search for 30 minutes and would never find anything.  Now, there is a larger community.  I’ve never had to wait more than a couple minutes to find an opponent in a Ranked Match.

The game has a lot to do.  While the Story Mode only lasts about 3-4 hours, there is a lot to be able to do with increasing your rank, completing the S.T.A.R.S. lab, and fighting friends in multiplayer.  If you can get into the game or love DC, the game should last at least 5-10 hours, especially if you like replaying the Story Mode to experience the tale that wove the characters together again.

Controls for fighting games on the Vita is always something I am a little skeptical about, before it happens.  Most games on the Vita have controls that use the touch screen and hardcore fighting fans will not want touch controls for something in the middle of a fast-paced battle.  The game does have some touch controls, but none of the take place within battles.  You will be flicking with the touch screen on story-mode minigames that happen before fighting, like the Green Arrow fighting arrows in first-person towards a charging Solomon Grundy.

You will also be using the L and R buttons.  Once you play enough to fill up the Hero Gauge, you can use L and R together to activate your character’s Ultimate Attack.

The controls are fairly in-depth, especially when you start getting into combo attacks, but overall, you will be using most of the buttons on the Vita. 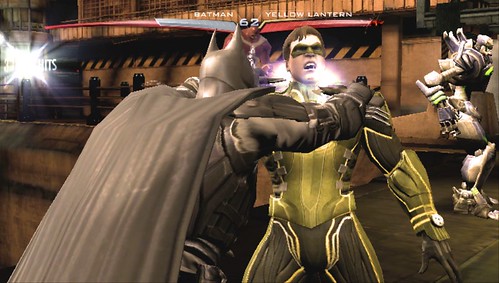 Presentation is where a lot of the game’s criticism comes from. It’s not that the game plays badly, because it doesn’t.  It is more about what the game looks like than anything.  For the story scenes that the game uses, they are taken straight from the console version of the game.  Every cut-scene looks the same on the Vita as it does on the PS3 or PS4.  This is very apparent as they play out, as the games are set in a wide-screen format and the way they play out make them seem almost blurred when there is a lot of movement on the screen.

The larger criticism is the gameplay engine.  While the scenes flow smoothly into gameplay, the game uses a very different graphical level than the other versions of the game use.  It is also that it looks different in motion than in stills.  The screenshots I have posted in this review can show you that the visual style of the game looks more like a high-end PSP game than a Vita game.  This is especially apparent when compared to games like Ultimate Marvel vs Capcom 3, which look near flawless on the Vita.

As far as how the game plays, there are no complaints to show.  Load Times are short, and gameplay flows very well.  Each battle is smooth and I did not encounter any slowdown or lag as I played the game.  This includes the Multiplayer.  All of my Wi-Fi matches consisted of flawlessly flowing, just like the battles did in Story Mode.

All in all, Injustice flashes its way onto the Vita in a decent way.  Ultimate Edition has every bit of content that the PS3 and PS4 versions have, and the game plays pretty well.  However, the visual presentation took a large hit when Armature ported it over to the Vita, which is not up to snuff from their other more well-done ports, like the Metal Gear Solid HD Collection.  If you love DC Comics and fighters, it’s great fun, but don’t expect it to be visually beautiful.

The PlayStation Vita Review Network Rates Injustice: Gods Among Us Ultimate Edition an 8/10.

0 thoughts on “Injustice: Gods Among Us -Ultimate Edition- Review”