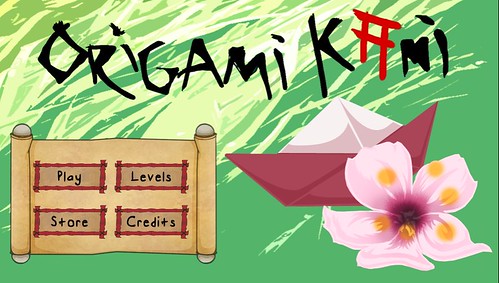 One such school is the University of Utah.  Earlier this year, the University of Utah got a team of students together to produce a game for the PlayStation Vita.  Since its release, they have gained a bit of popularity.  But, how is this game that these college students created?  Let’s find out.  Here is our official review of Origami Kami. 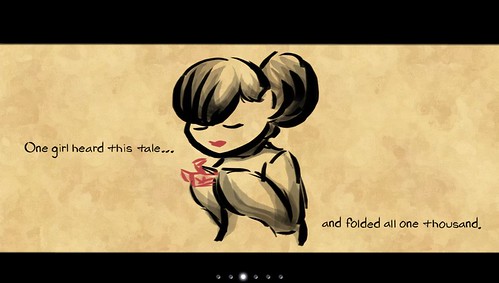 The story of Origami Kami is concerning an ancient legend.  The legends tells the tale about origami cranes.  If someone were to fold and create one thousand paper cranes, they would have a wish granted to them.  The legends has been around for ages, but no one has ever been able to fulfill it.  A young girl, though, believes this legend.  She crafts all one thousand cranes, but her wish is stalled when an evil spirit appears and scatters all of her cranes.

You are tasked with retrieving the cranes so that the girl may have her wish.  The story is very short and to the point in the intro and ending, but sets the stage for the type of gameplay the students have created within this game. 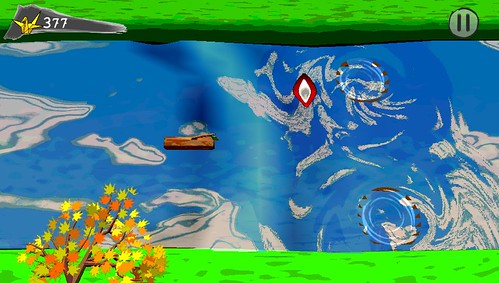 Origami Kami has an interesting premise.  The one thousand paper cranes that the girl from the story lost are scattered across a large stream.  Your task is to control ripples and waves in the water to navigate an origami creation and retrieve all of these cranes.  This will be what you shall be doing for the entire game, 1,000 being your end goal as you control water and guide yourself through the stream.

The way you do this is what makes Origami Kami so interesting and, oddly enough, difficult.  Instead of using the buttons to control and steer the “boat” to retrieve the cranes, you are using the touch screen to control the water of the stream.  You can create ripples in the water anywhere you can place your finger and it creates a momentum effect for anything around it, whether it be you or other objects around in the stream.

The idea behind the gameplay is to make ripples in the water in a way that you can guide your boat through the stream to collect the paper cranes scattered through it and avoid hazards like whirlpools.  There are a lot of physics involved here, as the boat will move more based on how close you tap to create the ripples as well as how often you’ve tapped to create more powerful and forceful ripples to move the boat.  This is also there when avoiding hazards, being able to have enough momentum going to pass the edges of a whirlpool without being sucked inside.

As you move through each stage, you will be collecting paper cranes that are placed and hidden in open view or under or behind objects.  These cranes come in a variety of colors and each color represents a different value.  For example, the yellow cranes add 5 total paper cranes to your total.  Some are hidden well, so you may need to stop in the middle of a stage to look for them and find them.

There is also a small amount of customization in the game.  You can replay stages and collect many more than the initial 1,000 paper cranes for the story.  These cranes can be used in the in-game shop to buy different versions of your boat.  These are mostly the same boat with a different color, other than one that is a Rubber Duck.  You can collect these in the game or you can use the “Store” option to find PSN Microtransactions to buy more cranes with your PSN Account.  These run between $1.29 all the way up to $34.99, though if you enjoy the game enough, you may as well take the time to earn them in the game.  The Micro-Transactions aren’t anything you can’t play the game to acquire.

There are 25 stages to play in this game, and the entire game for a single playing of each stage can take up to a couple hours.  This game isn’t long, but is a very basic game for pick-up-and-play sessions.

Controls for Origami Kami are very limited, in that it only uses the touch screen.  This makes using it simple, as with the way the game is played, it makes sense for the ripple effect to be touch-based.  Outside of that, there are also no button controls.  There are on-screen buttons for pausing the game, going into the menu, and otherwise.

Actually controlling is by tapping.  You can tap the screen where there is water on the screen to create a ripple effect and create momentum for your boat to move and find paper cranes.  You can tap anywhere and at any time, though you can only tap with one finger in the same moment.  Other than that, the controls are very simple, kind of like a game for a touch-based device. 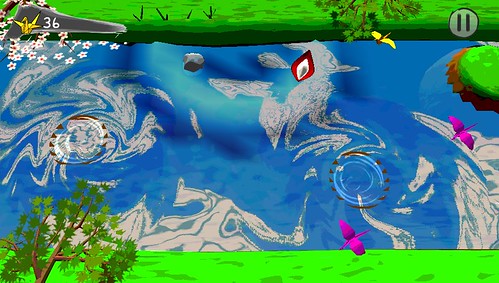 Presentation has its high points, but also has its low points for the game.  First of all is the visual presentation.  The game is very colorful and has a very Asian feel to it.  From the hand-drawn scenes with the girl trying to make her wish to all of the different objects around the stages, it has a very Chinese feel to it.  It’s colorful and all of the objects and models have a very “artsy” look to them, like they were taken out of an art school’s paintings, from the stages to the rippling effects of the water.

The audio presentation is something that should be talked about.  They have a traditional Chinese-sounding song, but there is only one song and it is on a constant loop.  If you are listening to the audio as you play this game, it will give credit to the atmosphere of the game, but with the same song from Menu, Stages, etc, it will seem and feel very repetitive by the end of the game.  While the gameplay is mostly the same, hearing the same song over and over again can get a little annoying.

Another thing to note is how the game plays.  In most stages, it’s very easy to play.  You can tap and everything flows in a very smooth manner.  However, once you get about halfway through the stages, you will find some stages where the frame-rate slows considerably.  Once these stages load, you have to completely rethink your timing as everything will run a lot slower.  I would say it would be about half as fast as the normal pace, if not more.  It’s very noticeable and makes finishing those stages very hard.

All in all, Origami Kami is a very unique Chinese-inspired game on the PlayStation Vita.  While the constantly-looping song and the slowdown in certain stages are certainly pretty annoying, it doesn’t keep the game from keeping its colorful and cute charm throughout.  With a bit of patience, you can get through the rough stages and have an interesting pick-up-and-play game worth your $1.29 purchase.