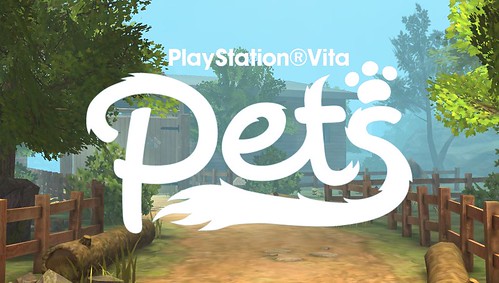 This review was requested by and dedicated to the lovely Kurisutina.

The PlayStation Vita doesn’t have a whole lot of games that appeal to a wide audience.  While Sony and their developers have been working hard on making games for a wide audience, there are some niche audiences that their games appeal to.  Games like Borderlands 2 and Killzone: Mercenary to fans of Western-developed games, and games like Persona 4 Golden and Hyperdimension Neptunia for more of the niche JRPG group.

However, they are growing.  If we look at family-oriented games or games that small children can get into, how many games are there?  The first games I think of are LittleBigPlanet and Tearaway.  Those are both adorable and simple platformer games that are very child-friendly and have a lot of cute aspects to them.  But the fact that I can only think of two off the top of my head isn’t exactly great for getting Vita units into the hands of children and families.

That is changing, though.  This past week, the Vita came with a new title that is sure to capture the attention of parents and children, alike.  If there is one thing that children love, it is having a pet.  Have you ever had a dog, or at least wanted one?  The Vita’s new cute game will appeal to that desire.  Although unfortunate being a digital-only release, Sony has given a pet-based game to the PS Vita.  With being compared to games like Nintendogs, here is our official review of PlayStation Vita Pets. 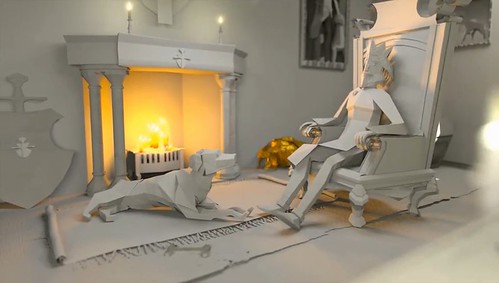 The story of PS Vita Pets takes place in the kingdom of Castlewood.  This was once a kingdom ruled by a compassionate king and his loyal dog, Cosmo.  Many years before the events of the game, the kingdom was overrun by chaotic invaders from a neighboring kingdom.  As they were being overrun by the invaders, the King and Cosmo worked hard on building hidden tunnels to travel throughout their land and bury the King’s treasure to keep it out of the Invaders’ grasp.

You come in as a new resident of what once was the Castlewood Kingdom.  As you arrive to move into your new home, you are taken to a nearby Pet Adoption Center, where you will choose a companion to keep you company at home.  Once you go in and choose your new companion, you are taken home to help train them and travel across the kingdom to recover the King’s treasures.

The story isn’t an overly fantastic story, but it is very cute and adds a lot more to this game that just being a Pet-Raising Simulator.  The world you travel in is fairly large and you will be spending much time, trying to find everything the King has left for you.  The dialogue between your dog can also be very fun and hilarious as they all have wits and personalities of their own. 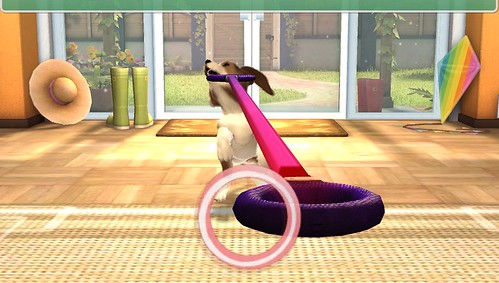 At its heart, this game is a Pet Simulation.  What this means is that it tries to simulate doing things to help train and raise a pet, despite that the only pets available for you to choose from are dogs.  This is very similar to the Nintendo DS title, Nintendogs.  However, there are a few key differences that separate the two titles, despite the amount of years between each of their releases.  The most notable is something we will highlight on later, the Adventure elements included in the game.

When you first reach the Adoption Center, you will be able to choose one of 6-8 dogs, each their own type of breed and gender.  The gender is mostly found through their voice.  As the developers said early on, these dogs can bark, but they also talk to you.  By talking to you, I don’t mean noises.  I mean actually talking to you.  There were more than a few times when my female dog threatened to call the fashion police on me for something I dressed her up in.

Once you get home, there are many things you can do.  Some activities, like Frisbee-throwing, obstacle courses, and hole-digging are not unlocked until you buy an item from the store that enables you to utilize that activity.  For example, you can’t go Frisbee-throwing without a frisby.  But, once you start, there are several things you can do.  You can play with toys, feed your puppy, give them a shower, go on walks, stroke/pet them, shop through the TV, or go through an Augmented Reality session that projects your puppy through the camera, allowing you to play games with them seeming like they are walking around your house.

All of these things can help maintain your puppy and also build up skills.  There are various skills that puppies have, like Fetch, Tug, Agility, Digging, and more.  These skills can be trained through three levels and they are absolutely crucial for progressing through the game.  When you leave your home, there are two doors to traverse through.  One leads to a Frisbee area and the other leads outside.  Doors have “Tug” handles on them for your puppy to open.  But they have to have a certain level of their Tug ability to be able to open. 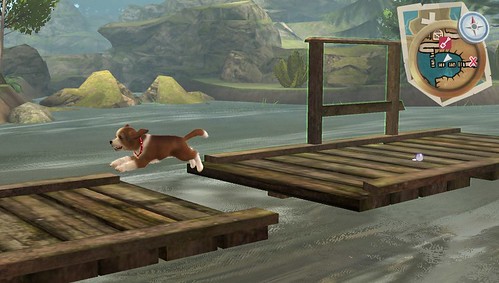 There are also other obstacles as you traverse the game that certain skills must be trained up for.  So, if you want to travel through the kingdom and find all of the King’s treasure, you have to train up all of your skills, as you may find a log that you need a certain Agility level to jump over or a large metal gate that you need a high Tug level to be able to open.  If you don’t, you cannot progress until you have that skill leveled up.

Another thing you need is Tricks.  As you progress the game, you will earn Buddy Points for pretty much everything you do.  These Buddy Points will unlock tricks you can learn to get past certain areas.  The tricks range from Sit, Lie Down, Crawl, Paw, Roll Over, and more.  As you unlock them, you can make them do the tricks by either telling them through the Vita’s Microphone (like calling them over by name) or using a touch screen gesture.  There will be certain areas where you will be required to use tricks to get past an obstacle.

Once you can progress, though, you will find yourself finding clues and searching for each of the King’s treasures.  Each are scattered throughout the Map that you are led to and will end in various puzzles that require you to think before the treasure is revealed to you and can be added to your Adventure Scrapbook. Puzzles could be as simple as sitting down on a stone pattern in order or traversing a large maze in a certain amount of time.  These will also require your skills to be leveled up to do.

One last thing to remember is maintaining your puppy.  When you go out and explore the kingdom, they will get dirty, thirsty, and hungry.  When you are home, they will tell you this, though being dirty is very apparent as you will see dirt up and down their fur and dirty paw-prints being made as they move around the home.  It’s important to maintain them being clean as well as buying and feeding them water and dog food (though my Sasha was convinced that much of the dog food wasn’t real food).

You are limited to one dog, but can make save data for several dogs, if you’d like to experiment with other breeds and genders.  Finally, as far as the time it will take.  It is hard to gauge the time it takes to complete the game, as the save files don’t record that.  Though, I would say that my file took at least 6 hours to complete and find the treasures hidden by the King and maxing out my puppy’s skills, not counting trying to look and find all of the collectible insignias and coins scattered throughout the kingdom.

The touch screen is used in various ways.  The camera can be moved by dragging your finger around in the direction you want to use.  These gestures are also used for mini-games for holding onto a tug toy, throwing a ball or Frisbee, or guiding your puppy through an obstacle course.  You also use the touch screen for choosing options, performing tricks, choosing where to go, fast-traveling through the map, and more.  While the rear touch panel isn’t used, the front touch screen is the primary means of controlling the game.

All in all, the game isn’t hard to control, though trying to guide your puppy through the obstacle courses when the camera angles are changing is very annoying when you first start attempting them. 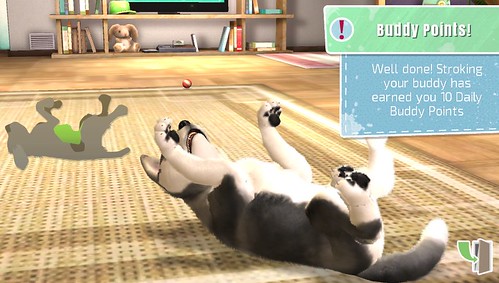 The presentation for this game is really well done.  The puppies look very detailed, as does everything else you acquire as you play the game.  Is the presentation perfect?  No.  You can see little breaks in the character models or in how the puppies walk, but overall, it’s a very good-looking game.

The way the game moves is impressive but also not-so-impressive.  Your puppy will react to many things.  Even when giving them a shower, they will react in different ways, depending on where you aim the shower head or scrub brush.  Position it over the back of their head and they will lower it to let the water run over their face, but position it to the front and they will raise their head up to let the water go down their front-side.  That part of it is really in-depth.

The downside of the presentation is how the game flows once you get outside.  When you are walking, you walk very slow, but there are also some breaks in the frame-rate and some slowdown when you are moving around turns.  This isn’t all that noticeable, unless you’re looking for it, but it does happen.  The game will be from moving smooth to fidgeting for a few seconds and back to moving smooth.  There is also an issue with your dog moving.

I’ve had many situations where the dog would move towards an object you want it to interact with and it will get stuck right next to it, infinitely running for it.  This cannot be cancelled by calling their name out or anything of the sort.  It makes you restart from the last saved area and do what you had just done all over again.

All in all, PlayStation Vita Pets is a great game for kids and family-oriented audiences.  It is cute, funny, and has a lot of depth in the fact that it’s both a pet simulator as well as an adventure game.  While there are some technical hiccups in the game and the game has only released digitally, it is a charming and cute game worthy of any dog-lover’s PS Vita library.