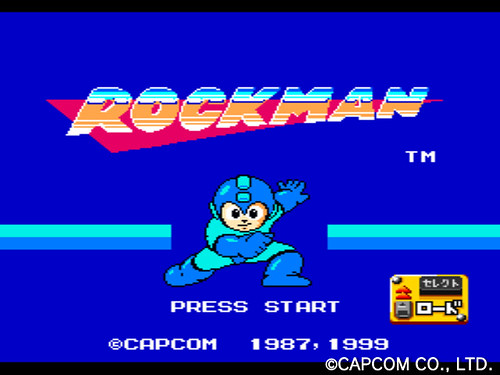 For the PlayStation Vita, there are options for Mega Man games.  With a Vita version of Might No. 9 incoming, we can look back to PSP and PS1 games.  If you recall, we reviewed Mega Man: Maverick Hunter X, the PSP remake of Mega Man X from the Super Nintendo era.  Beyond that, there are four other Mega Man games available on the system.  Mega Man 1-4 are available as PlayStation One Imports.  As we move into the history of gaming, here is our official review of the PlayStation Import, Mega Man. 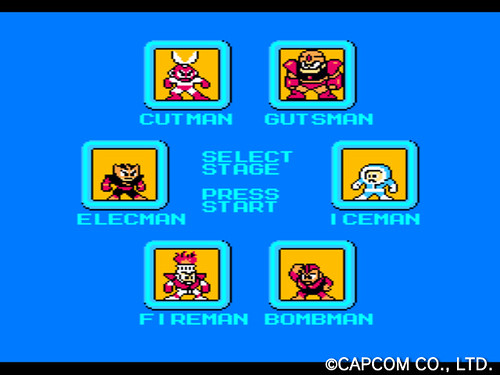 Mega Man, or Rockman, as the Japanese name goes, does have a story.  However, this is a port of the original, NES version of the game, which did not explain the story to you in the game.  In this version of the game, you start it up and are taken straight to the Stage Select screen, without explaining anything to you at all.

In Mega Man, you are playing the role of a boy named Mega.  A mad doctor named Dr. Wiley has created an army of robots to take over the world.  Mega takes on the role of a robot, himself, and goes out to put a stop to Dr. Wiley’s plot by taking out the six robots as well as Dr. Wiley, himself.

The storyline of the original series of Mega Man games was never highlighted on.  A game was just you going out to stop the robots and then Dr. Wiley.  This game virtually has no story as the game doesn’t do anything to tell you about it.  This was a common occurrence in the NES era, but not the PlayStation era. 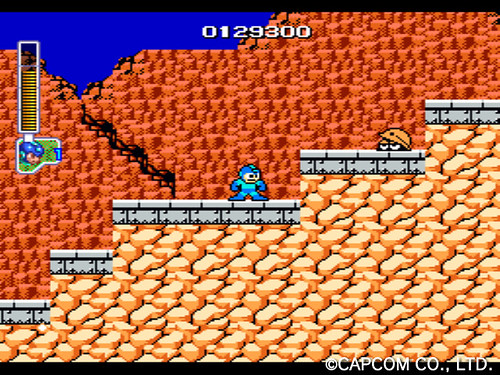 This game is a side-scrolling action game.  You will be progressing through stages to get to a boss fight, which is one of the six robots under Dr. Wiley’s control.  Your ultimate goal will be to clear all six of these stages to unlock the final set of stages and finish the game.  There isn’t a whole lot of exploration to do outside of these stages, though there are two different ways to play the game, which mostly just changes the Health Bar on the HUD.

There are six main stages to play through, each centered around a certain boss, which has a specific ability.  For example, Cutman can throw a large blade from his head and Fireman can shoot flames from his hands.  Each boss has a certain attack pattern as well as a certain elemental weakness to exploit.  As you clear stages and defeat bosses, you gain access to their special abilities, which can be switched to and used as you progress through stages.  Each boss is weak to a certain weapon, which is capable of doing much higher damage with a single shot than your main blaster weapon.  The key to making bosses is easier is finding those weaknesses and exploiting it.

As you play through each stage, you will be jumping around on platforms, climbing ladders, and fighting off enemies on your way to the room where the boss awaits you.  You will initially be equipped with a gun built into your arms, which is called a “Buster”.  It shoots out small orbs of energy that take down your enemy’s health.  Your goal is to move across stages without taking enough damage from enemies to have your health reach 0, in which case you will explode and get a Game Over. The key to staying alive is collecting items dropped by defeated enemies, which can give you extra lives, health, and energy for recharging acquired weapons.

One of the biggest challenges you may have when playing the game is that this is a direct port of the NES version of the game.  If there is one thing about the NES era, it’s that games were quite challenging back then.  Even from the very first stage you can play through, it becomes very apparent that you will be replaying stages and learning how each, individual enemy moves and attacks.  Specific timing is required for a lot of enemies.  At least to get past them without receiving much damage.

As far as length goes, the game can take a long time or a short time.  If you know what you’re doing and know how to avoid enemies, you could complete each stage in about 5-10 minutes, making the entire game about 1-2 hours in length.  If you have to replay stages, though, the length could easily double and go into 3-4 hours.  Regardless of that, it is a pretty short game and is meant to be picked up and played.

The controls of this game are very light.  As this was originally on a system that only had a D-pad, two buttons and Start and Select, you won’t be using every button on the system as you progress through it.  While you can assign buttons to the touch screen, that is not needed or required of you.  In fact, with the precise timing, it is suggested that you do not use the touch screen to play the game.

The D-Pad is used for moving Mega Man across the screen.  The X button is used for jumping to get across gaps and dodge attacks.  The Square Button is used for shoot off the energy orbs.  The Triangle is also used for this but it shoots three at a time, and much faster than when using the Square button for your weapons.  Finally, the L and R buttons are used to switch between weapons.

All in all, it is a pretty easy control scheme to remember.  It’s very basic for a very basic game. 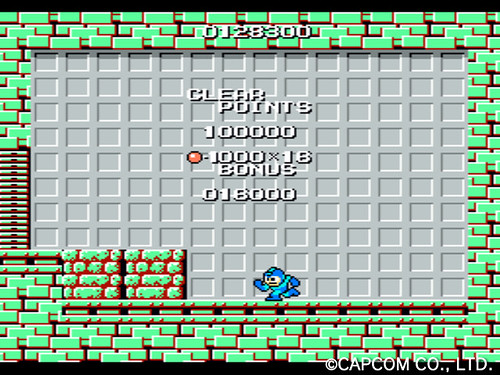 The presentation of the game is interesting, and easily the biggest thing that people will complain about.  First of all are the actual visuals of the game.  How it looks.  Since this is a direct port of the NES game, the visuals are the same.  The same, pixelated visuals are there.  When stretched out into Full-Screen, it still looks fine.  It doesn’t blur out or anything.  It doesn’t look fantastic, but it doesn’t look bad.

The game also runs pretty well.  When you first boot up the game, it may take some time for you to actually get into the game.  There are many Developer screens popping up, so it might take 1-2 minutes to get to the Title Screen.  Once you get in, though, load times are fairly quick.  Loading a stage only takes about 5 seconds, though you don’t spawn into the stage until a few seconds later.

I encountered no freezing issues with the game, though I did have a couple scenarios where there was some slowdown when jumping.  All in all, it runs well, other than the initial loading time.

Mega Man is readily available on the PlayStation Vita as a PS One game and is the same game that nostalgic gamers know and love.  However, this is an import, so all of the menu text is in Japanese and there are a couple of technical hiccups that hold this version back from being a great game.  Still, it’s fun if you’re a Mega Man fan or are curious about the classic games of the series.