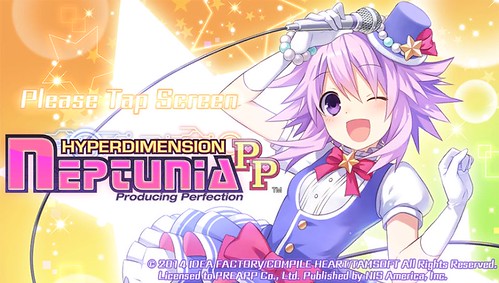 There is something interesting about Idol and Rhythm games. Rhythm games have had a special place in gaming since about 8 years ago. Guitar Hero and Rock Band took the gaming world by storm and became incredibly popular, bringing new life to the genre of Rhythm games. As such, with new life, many developers started making more rhythm games and similar games. Somewhere similar to these two franchises, and some not. Also was the larger boom of Idol games in the East.

Idol games are likes of games like Idolm@ster. This particular genre of games is centered on managing one or several idols as they go through their career as music idols. Think of it like managing a vocal artist, except in a very anime-like world. This mostly hasn’t been very popular in the West, but it has been booming for years in the East. Developers Compile Heart and Idea Factory International are planning on fixing this. 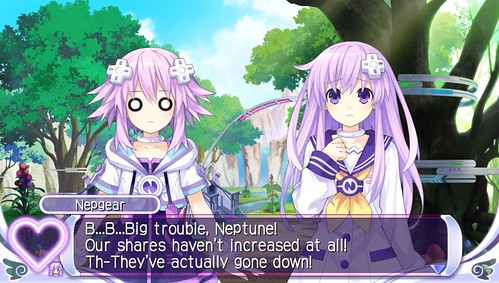 The game takes place in Gamindustri, the world where most of the Hyperdimension Neptunia series takes place. It is a world divided into four nations, each governed by a CPU Goddess. In order to maintain peace and order into their four nations and the world, itself, the CPU’s Neptune, Vert, Blanc, and Noire are given power known as Shares by the citizens of their countries. Without this, the world would fall into chaos and they would lose control of their people.

As the game begins, the four CPU’s have shares waning. It is explained that people known as Idols are appearing in all four nations and performing concerts to steal the hearts of the people. Noticeably is the Idol group known as MOB48, whom consists of monsters and they have stolen nearly all of the shares in Gamindustri. With their power waning, the four CPU’s meet to discuss a solution. It is decided that, to regain their shares, they must become Idols, themselves.

In order to achieve this, they transform into their powerful, adult “HDD” forms to summon a Master Producer from another world. You, the Player, are about to enjoy a Summer Vacation of gaming when you are summoned straight to Gamindustri to become the producer for the CPU’s. Confused, you are greeted by the four of them and become their Producer in order to regain their shares and restore order to their world.

The story is somewhat interesting, to say the least, but I would not suggest going into this game without prior knowledge of the series. There is some explanation of the world and characters, but much of the dialogue gives a feeling that it partially assumes you already know the characters fairly well, as it can be very confusing and odd for those new to these characters. There is also a fair amount of sexual references, though that is mostly when in conversation with the CPU Vert, whom has an oversized chest. 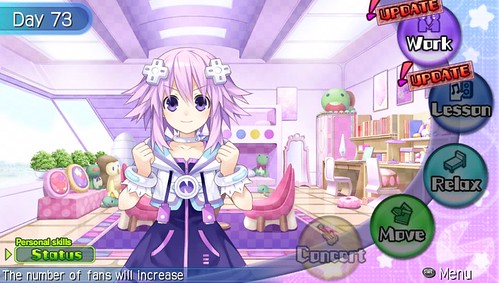 When you start up the game, you will be tasked with putting in your own name and choosing which of the CPU’s to manage as they go through their idol career. While you can put them in groups, eventually, you will be managing one at a time, as you progress through the game, though you can replay the game later once you finish it to go through with another of the four. Once you choose one, you will be taken to their governing nation.

Once you get acquainted with the CPU you are managing, you will be tasked with making them an Idol and making a song that reaches Number 1 on the Song Charts to regain her shares. You will do this by helping them improve their skills, have concerts, relax to reduce stress, and gain relationships with you and other characters. You also have a total of 180 Days to get a song to the top of the charts.

The timeframe should not be paid much attention to, as it doesn’t take anywhere close to achieve the goal. When I played the game with Neptune, I managed to get a song to that spot in about 130 days, so you don’t need to worry about the goal. What you will be focused on is enhancing their abilities so you can get a larger fanbase and do well in concerts. These are shown in the form of stats, like Vocals, Dance, Rhythm, Fans, Stress, Guts, etc.

You increase stats by doing various tasks during the day. There are 5 different types of actions you can do. The first is Work, which lets you have various events to increase your number of fans. Lesson lets you do various types of lessons and rehearsals to increase how well they perform with Vocals, Rhythm, and other concert-based stats. Relax will let you spend time with her to reduce Stress as well as increase Guts, which is required for holding Concerts. Move lets you go to another nation and increase your popularity there, and Concert is the last, which lets you hold a Concert, which can only be done every so many days and requires a certain Guts score to be.

Stress is something that you have to be able to manage. When you hold concerts or do certain events, your CPU’s stress will increase. If you get it too high, they will stress themselves out and won’t be able to function. So, it’s key to always watch that and do events for relaxation to keep that under control. You will always have a higher chance of lowering your Guts score when they are stressed. So, it’s a challenge to find a balance between events, which can take up various amounts of days, to maximize efficiency and keep stress to a minimum. 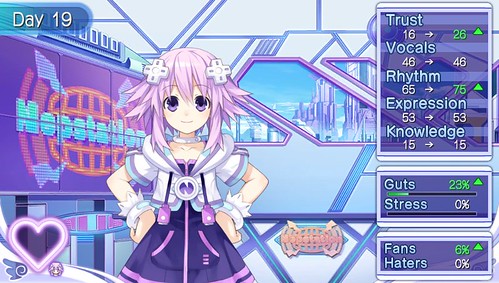 The final, crucial part of the game is performing concerts. When you perform a concert, you will choose your idol, or idols if you can convince another CPU to join you, and place them somewhere on a chosen stage, and will perform a specific song. With each CPU, you will have access to five different songs and be able to arrange their costume with songs and costumes/accessories that you unlock as you play the game. Then you are able to go and perform the concert, trying to stun your crowd and gain a high score.

The concerts showcase your CPU(s) dancing to songs that sound similar to the style of song you would find in the Vocaloid world and it’s your job to implement camera angles and stage effects to increase your score. You will be able to equip only three stage effects when you do a concert and the entire process will be experimentation. The tutorial for this section is very limited and just send you on your way to experiment with effects at certain times to see what stuns the crowd and when it does. Effects also have a recharge time so you can’t just spam effects all throughout the song, though you are free to move the camera as much as you wish. Then you will get a score based on how well you did.

Doing concerts will raise your songs in the Song Charts that you become notified of every month. Your ultimate goal is to get a single song to the #1 slot. Once you do that, the game will proceed to the End Credits. This can be done at various times. It could be on Day 131 or Day 180. It depends on how high you manage your stats and how well you do in Concerts.

Outside of the main campaign, known as Producer Moder, there is also Viewer Mode and Unlimited Concert Mode. Unlimited Concert Mode allows you to create concerts back to back, based on content you have unlocked and saved as Clear Data. This is mostly to enjoy the concerts and listen to the music. Viewer Mode is a little different. This allows you to hold your Vita vertically as you view one of the CPU’s in a costume you unlock during Producer Mode. This has some more perverted features, letting you tap them in various locations, resulting in responses. While they don’t speak, they embarrassingly cover up wherever you touch. You can also use this mode as a themed alarm clock.

All in all, the game is similar to other Idol games, but in general, it feels like it lacks something. The entire game was fun, and the dialogue is comical, but it felt like I was just playing a series of mini-games, rather than a full game. Finishing with a single CPU, without skipping scenes, should take you about 4-6 hours, depending on how well you do in concerts. You can save the clear data, giving you a potential of about 20 hours if you replay the game with the other 3 CPU’s.

Navigating the world isn’t terribly hard, though you will be using a lot of the buttons on the Vita as well as the touch screen as you play the game. When you’re outside of concerts, you will be using either the D-Pad or Left Analog Stick to cycle through menus for instances where you need to device what event you wish to do or what you want to set up. The X Button is used for choosing an option in a menu, and the other three face buttons are used when you can choose a dialogue choice when in conversation with a CPU.

Within concerts runs a little different. When you’re in this mode, stage effects will be set to Triangle, Square, and X, and Circle will be used to change the camera angle. You can modify where the camera will be moved to, mostly in a vertical sense, with the D-Pad, and move it freely in a horizontal sense, as well as zooming, with the Left Analog Stick.

The touch screen is only used in Viewer Mode, when you’re able to poke the currently-displayed CPU to provoke an embarrassed response. This is also only the front touch screen. The rear touch panel is not used within this game. 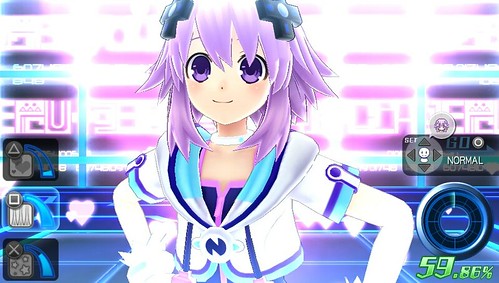 The presentation is one thing that is done really well in the game. Outside of concerts, everything is in a 2D sense with visual novel-style scenes. However, there is an added flavor added to those scenes. If you look closely as the scenes play out, the 2D character artworks move and breathe, much similar in fashion to how the models work in Conception II: Children of the Seven Stars, though the models in Neptunia move more. Their arms can move as well as their mouths. They didn’t do that in Conception II.

Another is the 3D. When you are in concerts and can zoom in on the character models, you can tell the developers did a nice job at rendering top-notch 3D character models into the game. While there are some jagged edges you can see if you look close, everything is incredibly detailed and looks crisp, smooth, and colorful. This could be expected from this type of game, but the developers should be praised for that aspect of the game.

The game also runs well. The load times are short for when loading concerts, and I have experienced no lag in the game at all, even when you have three CPUs dancing on-screen at the same time.

Neptunia PP is definitely a fan game, for both Neptunia fans and Idol fans. While the game can be confusing and can feel like just a bunch of mini-games, this is a fun, visually impressive game to enjoy while waiting for the inevitable release of Rebirth;1.