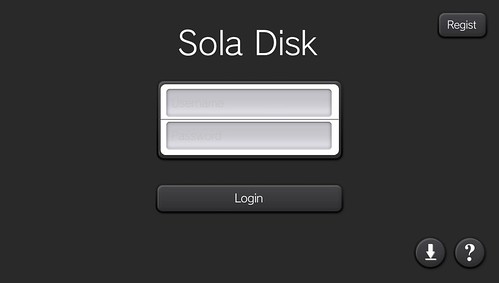 This review was requested by and is dedicated to Phil.

The Cloud is something that is very important to technology, these days.  Google Drive.  Sky Drive.  One Drive.  iCloud.  There are so many different names for different servers that implement “The Cloud” of technology throughout the world of the Internet.  People want to store their files online so they don’t have to be on a specific device to be able to view it.  Write a document on their PC and upload it to the Cloud and then pull out their phone and pull it up when they’re on the move.  This is going further and further.

The Cloud has also affected the PlayStation Vita.  If you have a PlayStation Plus subscription, you can store save data on the Cloud to be able to access after removing a game from your Memory Card.  There are also some apps out there that are implementing the Cloud in a more document-type sense.  While there currently are no Vita-specific apps that do this, there are some coming into the world of PlayStation Mobile.  One such app is called Sola Disk, by the very-dedicated PS Mobile developer, ZHANG BO.  Here is our official review of Sola Disk. 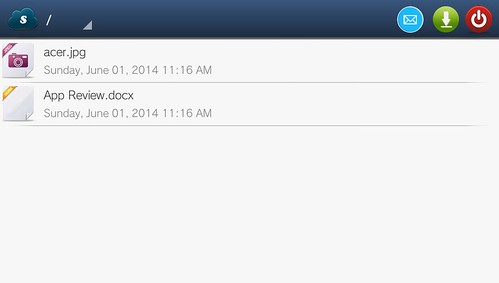 Sola Disk is a way to access files on the PlayStation Vita when you’re connected to a Wi-Fi Hotspot.  When you first boot up the app, it asks you to create a Sola Disk account, which is free and very easy to do.  The account is actually linked to a web site that you must access from a PC to upload files to it.  While the app doesn’t mention the URL of the site, the PlayStation Store does.  The following URL is used for Sola Disk File Management:

Creating a profile in the app is extremely easy.  ZHANG Bo has implemented where you just make a username and password from within the app and register.  You don’t need your name, address, email address, or anything like that.  It’s incredibly simple and just like logging into a service.

As far as files go, you have to upload files from a PC or some other device.  Once you have them uploaded from a PC, though, you can download and view them from the app on the PS Vita.  You just open the app and you’re automatically taken to a list of all of the files that are uploaded onto the Sola Disk account and will let you access them by taking a few moments to download them (assuming they’re small files.  The size limit for a file is actually 200 MB) and view, listen to them, or read them.

Apart from that, the app has options to email the developers directly, which will redirect you to the Vita’s Mail application.  It also has options to see all of the files you’ve downloaded with the Sola Disk, which will allow you to view the files outside of being connected to Wi-Fi and an option to Log Out of your account so no one can pick up your Vita and access your personal files.

It is a relatively simple app, and works well if you want some files to be able to open up with ease from the app, rather than from a different app, or multiple different applications. 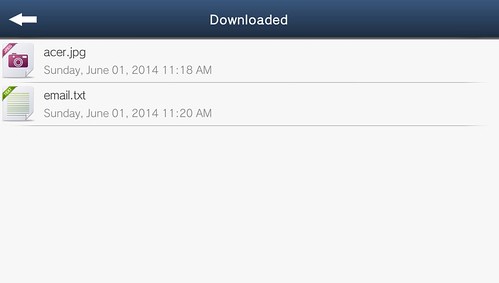 The app has a very simple design and interface, much like ZHANG BO’s other PlayStation Mobile apps.  When you first boot up the app and get to the login page (Assuming you aren’t already logged in, you will find a page with a login area as well as four buttons to press.  These buttons are for Registering, Logging In, Going to the Developer’s Web Site, and Downloading Files.

When you go to Register, you will see a screen that looks almost exactly like the previous screen, though it only has the login fields for a username and password as well as a Register button below it.  This is very simple and I feel it is one of the most simplistic and easiest registrations for an app or service I’ve ever seen.

Once logged in, you will see a white page that will list your currently-uploaded files.  You may tap on any of those files to open/download the file, whether it be a document, picture, or music file.  This will take you to another page to view and enjoy that file.  On the main page, though, there are also three buttons that you can press at the top-right corner.  These are for Emailing the Development Team, viewing your Downloaded Files, and Logging Out.

When you go into a file, you will be taken to a page that will display nothing but the file and a button for returning to the previous screen.

All in all, the interface is very simple and every button option is laid out to be very noticeable.  Although each button doesn’t say what it does, they do have symbols to show off what they do, like an email icon for emailing developers or a power icon for logging out.  It takes a little trial and error to get used to it and see what everything does, but it makes everything very noticeable. 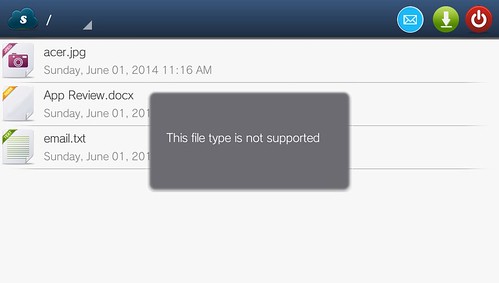 Performance has always been a big thing with PlayStation Mobile.  While the service does add a lot of functionality to the Vita that its current apps do not do, there are some drawbacks to emulating PlayStation Mobile games and apps on the system, though the biggest of those is Load Times.  It normally takes a PS Mobile app about 15-20 seconds to boot up to be used once it is selected to open.  Sola Disk stays true to this standard.  It will take about 15 seconds to boot up and get logged in.  It’s on the lower end of that average, but it is still there.

Apart from that, the app runs pretty well, as ZHANG BO’s apps normally do.  It will only take a moment to transition from one screen to the next, and downloading files do not take long at all, though the only files we tried were pictures and documents.  So, the app runs very well, other than the initial load time, which is possible is something that simply cannot be helped.

The major drawback of the app is the fact that it has a very limited number of file formats that it can support.  When you’re logged into the Sola Disk web site on your PC, you can upload any files you want to the service.  However, when you’re in the app, you cannot open up any file you upload.  The app currently only supports picture files in JPEG and PNG format, text files in TXT format, and audio files in MP3 format.  If you’ve got a lot of files in those formats, then it should be fine.  But, we uploaded a DOCX Microsoft Word Document and it couldn’t open it up at all.

Another drawback is how it opens pictures.  We uploaded a few JPG/JPEG pictures to the app and tried to open them up.  While they did, indeed, open, they didn’t open very well.  When we opened up rather large JPG files, the file opened in the top-left corner of the screen and took up a very, very small amount of the screen.  There was no way for us to enlarge it, either.  Text files opened fine, but pictures did not.

All in all, Sola Disk is a competent service for opening files on the PlayStation Vita.  While there are some drawbacks with the currently-supported file formats as well as pictures not opening correctly, it is a pretty decent app for opening up text files and listening to MP3s not already on your PS Vita’s Memory Card.  It could definitely use some updates, but was one of the more user-friendly apps I’ve used from ZHANG BO.