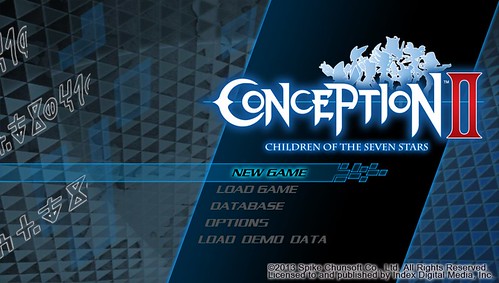 The PlayStation Vita has been home to a lot of new Role-Playing Games this year.  The system already had some RPGs like Ys: Memories of Celceta and Persona 4 Golden in its arsenal, but it’s getting a lot more.  Some that we have reviewed and can think of are games like Final Fantasy X | X-2 HD Remaster, Demon Gaze, and objectively Ragnarok Odyssey Ace.  There are more coming and there’s also another element involved.

With a late trend of localized Japanese games, some of the developers are starting to get much more daring with games that have mature content within them.  By mature, I mean more sexual content with them.  There have been some sexual-type content in games like Valhalla Knights 3 and Demon Gaze, and its continuing to many quirky games that are actually getting localized to the West. 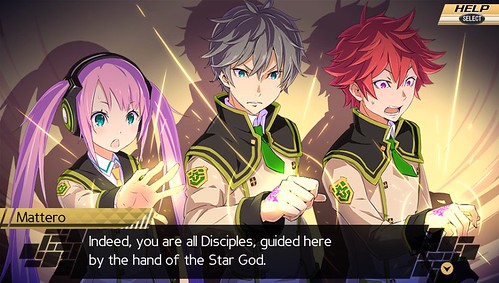 The plot of Conception II takes place in an unnamed world that is infested with gruesome monsters that are a constant threat to the rest of the world.  These monsters are coming from large labyrinths and patches of darkness known as Dusk Circles.  To counter the threat of these monsters, an almighty being known as the Star God bears his mark and imbues many teens with Star Energy, so that they may become disciples to form a resistance to strike back at the monsters.

You follow the journey of Wake Archeus.  After his sister is killed from a monster attack and he realized that he bears the mark of the Star God, he attends a private academy to become a Disciple.  As he enters, he realizes he has the highest density of Star Energy and is known as a “God’s Gift”.  As a result, he is tasked with teaming up with female Disciples to “Classmate” with them to create Star Children and take them into the labyrinths to wipe them out and restore peace to the world,

The story of Conception II has an interesting premise.  However, be prepared for lots and lots of sexual references and jokes.  If you have a problem with sexist or pervish dialogue, you may be pushed away from the story, as well as the “Classmating” and “Classmanting” terms that are clear references to showing these teens having sex with one another. 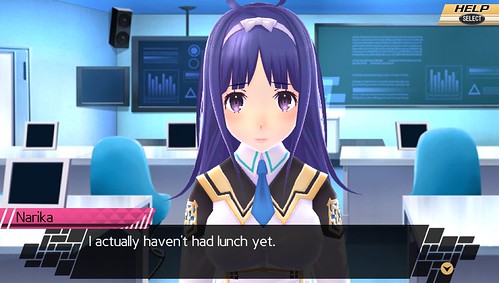 The gameplay of Conception II has many different things you can do.  Though, a lot of it contains two main sections.  The first section will be everything you can do at the academy, using the various resources and facilities, advancing the story, and more.  The other half of it will be dealing with the actual labyrinths you need to go through to progress the story through its major points, as the main goal of the game is to purge all seven of the major Dusk Circles.

When you’re at the Academy, there are a lot of facilities you can go to and take part in.  Not all of the facilities will be available from the start.  You will need to progress the story and level up the city to unlock those extra facilities.  From the start, though, you will have the Academy, which is the main area where you will be witnessing story scenes and interacting with the female disciples.

The female disciples are important because they have mood stats and you will want to increase this for the one you are planning to take into the labyrinths with you, as well as for using the Classmating process of creating Star Children to divide into teams and also take into the labyrinths with you.  To increase their mood, you can give them gifts and spend time with them with events, consisting of option-based dialogue, with one title that increases their mood and others that do not.

Other than the Academy, there is a shop where you can buy weapons, armor, and items.  There is also an unlockable Gift Shop, where you can buy gifts and accessories to give to the “heroines” that you take into the labyrinths with you.    There are also some facilities that you can use that implement the your Star Children, like being able to send them into the Labyrinths to get items for you while you do something else.

There are also facilities that implement the Labyrinths.  The Training Facility can be accessed to go into stronger versions of the main story labyrinths to test your strength as well as getting money rewards.  There are also two facilities that store quests for you to do.  These quests require you to defeat a certain number of certain enemies or by obtaining specific items and give you rewards.  The incentive for finishing these quests is that is one of the only ways to upgrade Wake and the Heroine’s weapon and armor, rather than buying from the Shop. 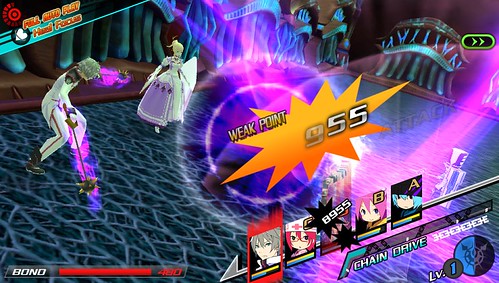 The biggest and most important part of being in the city is Classmating.  Despite its obvious reference to sex, it is how you create new troops/Star Children to take with you into battle.  When you have a certain amount of Mood points with a heroine by doing events with them or going through Labyrinths, you can perform Classmating to produce Star Children.  This involves using a doll called a matryoshka to produce Star Children.

When creating them, you can choose an available class to make them, like Magician, Witch, Lancer, Paladin, Mercenary, Diva,, and more.  They will learn different abilities, based on what class they are, and you will unlock more classes as you progress and find “Keys” you can use during the Classmating process.  You will need as many Star Children as you can make, as you can take three parties of three Star Children with you into the Labyrinths and, in the later portions of the game, you will need them.

A final thing about Star Children is that they have Level Caps.  Once they reach their maximum level, you can give them their “Independence”, which will level up your city.  Leveling up the city is important as it will unlock more facilities and features for you to use.  This starts a cycle as you will want to constantly make and train new Star Children to get higher maximum levels and stronger abilities.

Going through the dungeons is the bulk of the game’s time.  You will be put into a 3D Labyrinth where each room contains doors to go through, enemies to fight, chests to open, and portals to use to go to the next floor or escape from the labyrinth.  You will need to progress each floor to find the portal to the next stage.

Finding an enemy in the dungeons initiates a turn-based battle against a group of enemies.  This is where things get interesting.  Conception 2 is based on finding enemy weaknesses.  Instead of finding elemental weaknesses, though, you will be finding weaknesses in types of attacks as well as positions.  There are four positions around an enemy.  You will be able to find that attacking a certain position will be their weak point and do more damage.

Chains is also something to consider.  As you attack enemies, you can build up a chain combo.  When you max this out, the enemy will be immobilized and you can attack them to build up the chain further.  If you achieve this in a battle, it will increase how much Experience, Money, and Bond Points (Used for Classmating) you receive per battle.

As the game’s difficulty spikes a good bit during each chapter and you are going through teams of Star Children to level up the city, you will be grinding a fair amount during the game.  To make this easier, the game’s battle system has an Auto Battle feature.  This lets you set tactics for each team and let them go at it without putting in commands.  You can also increase the speed at which battles take place.  This makes grinding much easier and more comfortable.

There is a lot to do in Conception II.  From start to finish, you will probably spend around 40 hours in the game, depending on how much you grind and how many heroines you try to manage with your dungeon-crawling and events.  It’s not a short RPG, but not a long one, either.

As far as controls are concerned, this is an interesting title.  Many of the Vita’s newer games utilize the buttons on the system as well as the touch screen and rear touch panel.  Conception II is the odd duck out, as it doesn’t use the touch screen or rear touch panel at all.  You will not be using the touch controls at all, unless you use them when you save your game.  Otherwise, you’ll only be using the buttons on the system.

To navigate the menus as well as moving around in the labyrinths, you will be using the D-Pad and the Left Analog Stick.  The Right Analog Stick is only used inside the Labyrinths, to control the camera while you explore each floor.  The Camera can also be controls with the L and R buttons, as well as pressing those two buttons together to re-center the camera.

The X button is used for interacting with objects as well as choosing commands or options in battle and menus.  The Circle button is used to cancel out of those options or to exit the menu.  Square is used for switching menus and the Triangle button is used to toggle the speed at which battles take place, which can only be done from within a battle.  That is also used for pulling up the menu when in a labyrinth.

It’s a standard kind of control scheme, though it is a little odd that the touch screen isn’t used for anything, even menus. 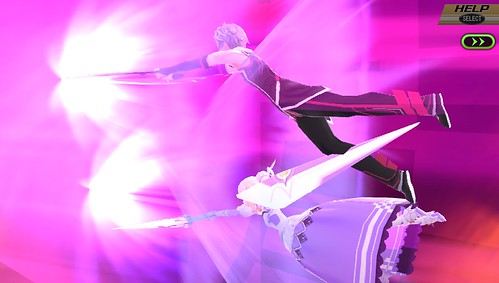 Visually, this game is interesting as it has two visual styles.  There is a very visual-novel/anime design that you will see when you are viewing story scenes as well as viewing the map and the city.  All of it will be more of a point-and-click environment and won’t be completely 3D until you actually go into the labyrinths.  This could be compared to games like Hexyz Force or Persona 3 Portable.

An interesting part of the 2D visual-novel style is the character artwork in story scenes.  When you’re in the middle of a scene, the character sprites actually move, as they breath.  Their hair, chest, face.  It all moves, which is a very interesting and unique aspect of the design.  Obviously part of this is showing more of the quirkiness with breasts bouncing, but the idea of visual novel scenes with moving characters is interesting.

In labyrinths, the game plays extremely well.  The frame rate is definitely set up high for this game and you can tell.  Everything runs really smooth and flows well.  It probably has one of the smoothest frame rates of any of the original games made on the PlayStation Vita.  It really plays nicely.

The Load Times can be lengthy, at times.  When you’re loading a labyrinth, be prepared for waiting about 5-10 seconds for it to load when you leave and go back.  Aside from that, switching between floors or going into battles usually takes about half of that.

All in all, Conception II is a solid dungeon-crawling RPG.  There is definitely a lot of quirkiness in the story, classmating, and Wake’s relationships with the heroines of the game, so you should consider that before your purchase.  Despite all the quirkiness, there is a solid RPG behind it, just waiting to be played.  If you’re a fan of dungeon-crawlers, you should definitely consider this purchase, despite its grindy nature.

569 thoughts on “Conception II: Children of the Seven Stars”