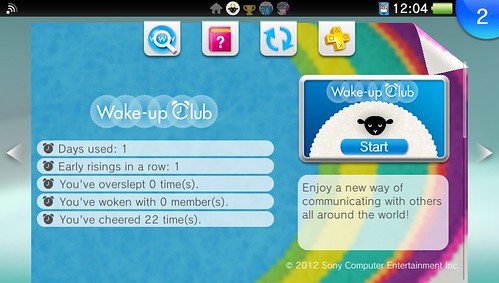 There are a lot of things you can do with a PlayStation Vita, or a handheld device in general.  People can do a lot with them, specifically, with applications, or apps.  Weather.  Netflix.  Timer.  Alarm Clock.  YouTube.  The range seems absolutely limitless for what, exactly, they can make apps for.  While the PlayStation Vita has a fairly limited library of apps, it is slowly growing and there are some really interesting apps out there that you can download.

One thing to note is Alarm Clocks.  This is something every person sorely needs.  No one wants to oversleep and be late for school, work, or anything else they need to be at a certain place for.  Because of that, people have alarm clocks.  Thanks to the digital age, there are a lot of apps available on various devices to enable Alarm Clocks.  Phones, for example, have become alarm clocks for some people.

Let’s say, though, that you don’t want your phone on all night long, every night.  You don’t want it getting hot and overheating while you’re fast asleep.  For that, there are apps for other devices that can act as Alarm Clocks for you.  On the PlayStation Vita, there is an app specifically designed to be your own alarm clock, as well as interacting with others with their own sleep patterns and alarms.  Here is our official review of the PlayStation Vita app, Wake Up Club. 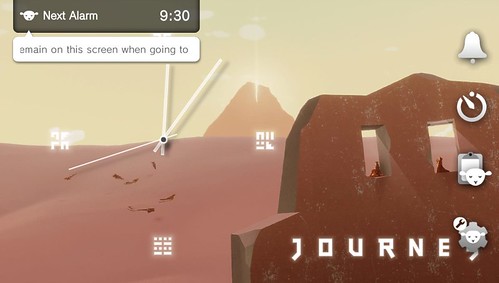 Wake-Up Club is an alarm clock, but that doesn’t mean waking you up is everything that it does.  It can do lots of things, though the biggest emphasis is on the Alarm portion of the app.  It also collects stats, times you on how fast you can wake up, among other things.  It’s a fairly detailed and deep application, especially for something as simple as an alarm clock.

When you boot up the app, there are a few things you can do.  First off, you’ll need to sign into PSN the first time you boot it up to use it, as there are a lot of PSN-central features that the app uses and needs to have that set up.  When that’s all set up, you can set up an alarm, which can do a few things.

There are different kinds of alarms you can set up.  First of all, you can set what type of alarm you want.  A Wake-Up Club alarm is the default type, which requires you to have a Wi-Fi connection going and that you stay in the app to make it go off.  There is also the Standard Alarm that doesn’t require a Wifi connection that you can set to go off, whether you’re online or not.

Some of the other options you can set are the sounds the system makes when the alarm goes off from about a dozen pre-determined sounds, the type of male or female voice that will greet you with a “Good Morning” call when the alarm goes off, along with how often you want the alarm to repeat.  You can also have multiple alarms in the app at once, so if you need alarms for all of your breaks at work, you can do that.

Another thing the app can do is use a Timer.  This is like a Kitchen Timer and be set a few different ways.  It seems a bit limited, as you can add time to the counter on the Timer in variations of 10 minutes, 1 minute, 10 seconds, and 1 second.  This is a little more complex than simply putting in the exact amount of time you want, but it does let you make a timer up to 99 hours in length.  I don’t know when you’d actually need a timer that long, but it is there.

The last features of the app are the settings and the records.  Records show your own stats with the app, like how quickly it takes you to wake up or how many people you’ve cheered on with the more social side of the app that lets you cheer and help other people currently using the app wake up.  The settings allow you to change options like your theme background and the sound effects the app can make with its clock.

The last, and most surprising feature of the app is Trophies.  You heard that correctly.  This application has its own Trophy List, like games do.  By doing certain things, you can unlock twelve trophies to add to your total in PSN. 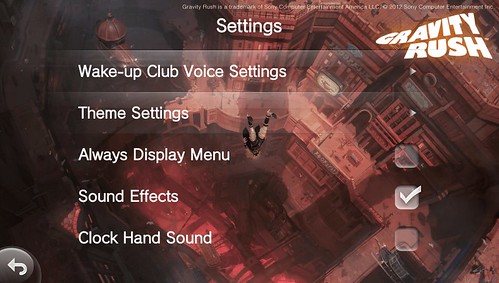 The interface of the app, like most of the apps built around the PlayStation Vita, is pretty simple and easy to navigate.  There will be very few times when all of the information and options you need will not completely be displayed on the screen for you.  That is the stats menu.  For everything else, all you will need to see will automatically be on the screen and will not require scrolling to see everything.

When you first boot up the app and sign into PSN, you’ll be taken to the Clock screen, where you will see a clock in front of your background, whether you’re using the default background or the Gravity Rush theme.  There are other options here as well, but they don’t display until you tap the screen.  Then, it will show four options, allowing you to go into the Alarms, Timer, Stats, and Settings.

Once in the alarm screen, you can manage your alarms or add a new one.  With adding a new one, there are many things you can set with large and easy-to-tap buttons for each one, whether it be navigating the military time settings or choosing which days you wish for the alarm to go off on.  The larger buttons that you can tap with ease are also on the other settings screens as well as the timer area.

Within the timer, you see a large counter on the top of the screen and below it are large, square buttons for adding time to it as well as starting or resetting the timer.  Each of these areas also has a large button in the top-left corner, allowing you to go back to the previous screen.

When you’re looking at the alarms or looking at other people using the app, there are pretty noticeable buttons to tap.  Other people appear as sleeping faces, while your button to verify that you’re awake is your own PSN avatar.  To show that you’re awake, you will see your avatar moving and must tap on it to let the app know you aren’t still asleep. 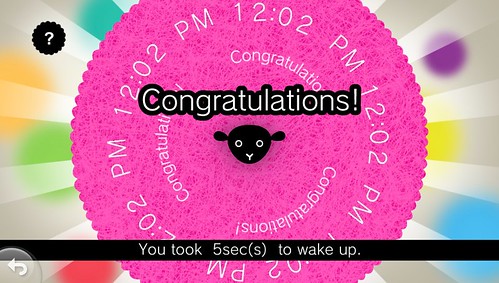 The first thing to say about performance are for the controls of the app.  While there are many apps out there that do have some sort of button control as well as touch screen control, Wake-Up Club is not one of them.  For this app, you have to use the touch screen, and only the touch screen.  While this could be consider a downer point to some, the interface is made very simple for those using the touch screen.

The first thing I will say about how the app runs is that it has some slowdown and lag.  When you’re in certain screens, like the Settings menu or setting an alarm, there is a delay you need to wait when a new screen opens before the app will let you choose an option.  This delay is about 1-2 seconds, which isn’t a lot, but it is noticeable.  If you’re trying to make an alarm quickly as you feel drowsy, it can seem very much of an annoyance.

The rest of how it runs is very interesting and convenient, though.  First of all, the app can run in the background, so you can have Wake-Up Club open at the same time as anything else.  What’s more, though, is that the Normal Alarms will work even if the app isn’t open.  Let’s say you were to set a Normal Alarm and then completely close out of the app so the bubble isn’t even open.  Then, put the system into Sleep Mode.  The alarm would, indeed, still go off.

That is one of the biggest praises for this app.  Not only can it run in the background, but its timer can run when the system is in Sleep Mode, and the alarms can run when the app isn’t even open at all on the system.  So, once you set a daily alarm, you don’t have to open it every day for it work, which is something no Vita app has ever done before.

All in all, this app can turn your Vita into an exceptional alarm clock.  It’s got options for several alarms, a timer, and a number of social-embedded features to allow you to interact with other PSN users.  While it does suffer from some lag and delay in the settings menu, the app is extremely convenient with being able to run in the background as well as when it’s not open at all.  This is, by far, one of the Vita’s best apps and a very good alarm app.

610 thoughts on “Wake Up Club Review”