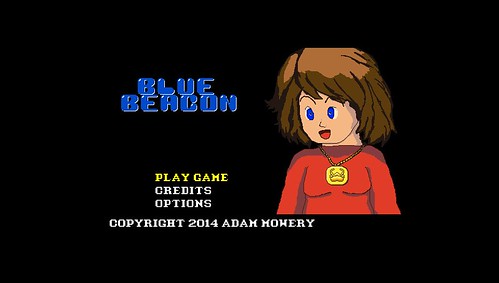 There are a lot of games that have been made available on the PlayStation Vita, thanks to PlayStation Mobile.  While there are some bigger Mobile games like Chaos Rings, along with Indie games like Bike Rider DX, they add a lot of options for the Vita.  It is sad, however, that most gamers don’t even realize what PlayStation Mobile is, despite that many of the games that release on it are there, specifically, for us on the Vita.  Many descriptions on PSN don’t even list the Sony Android Tablets or Phones on there for the games, and some games don’t have touch controls.

Among the games available on PlayStation Mobile are games that have gameplay very similar to older games that those of us older gamers know and love.  The first PlayStation Mobile title we reviewed, Gun Commando, is a prime example of that.  It had gameplay very similar to the old Doom and Wolfenstein games.  While that game wasn’t as in-depth as Doom or Wolfenstein 3D, it offered a fun pick-up-and-play game for gamers who loved those types of games.

Today, we have a review of another PlayStation Mobile game that reminds us of games from the past.  Think way back to the 1980s when Nintendo released Super Mario Bros for the Nintendo Entertainment System.  Think about how the game played, from the side-scrolling to the interface to the powerups.  Today’s review is a throwback on that kind of experience.  Originally released on the Xbox Live Arcade, here is our official review of the PlayStation Mobile title, Blue Beacon. 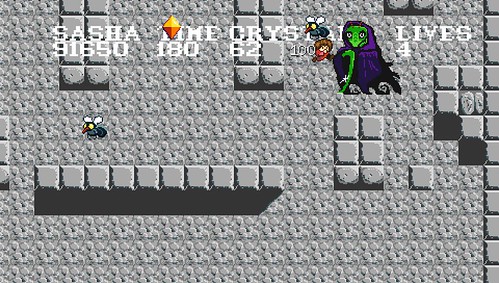 Blue Beacon has a very simplistic story and, like the game its gameplay is based on, not much of a story is explained to you when you boot up the game to play it.  You follow the adventures of a young woman named Sasha, whom is on a quest to save the world.  Giant insects and animals have invaded her world and she is on a quest to find three Discs of Power for an unknown purpose to be able to conquer the threat against her home.

The story isn’t capitalized on when you’re playing the game.  While there is a small scene at the end of the game, showing you why Sasha needs the three discs, there is no dialogue throughout the game.  It is mostly an assumed story and the focus of the game is on the actual gameplay, though the final scene is quite humorous. 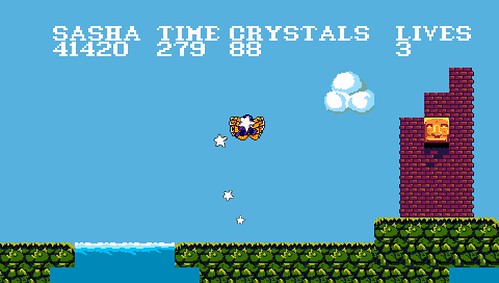 Blue Beacon is a stage-based side-scroller.  As you enter each level, Sasha will be moving across a 2D plane, trying to progress to the other side, while collecting crystals and power-ups, defeating enemies, and discovering secret locations while avoiding hazards like cliffs and sudden drops from the ground beneath her.

Each stage plays out in a very similar fashion as does the original Super Mario Bros. game.  Even the interface looks similar with text across the top, showing Sasha’s name, the amount of time left for the stage, your current score, how many lives you have left, and how many crystals you have gathered throughout your currently journey.

At the start, Sasha cannot take a single hit from an enemy without getting a Game Over, involving a Grasshopper dressed as the Grim Reaper, coming down to claim her life.  To be able to increase the amount of hits you can take without dying, you need to find power-ups.  This involves jumping and hitting square-shaped blocks with your head.  These blocks can contain either nothing, crystals, or a power-up.  You then have to jump to where the power-up is to activate it.

There are three different power-ups you can collect as you progress through the game’s twelve stages.  Each of the power-ups changes Sasha’s costume to symbolize a certain insect whose powers she takes on.  The first is a Beetle, which gives her a Beetle Horn that you can use to charge into your opponents as well as blocks to clear a path.  The second power-up is that of a Butterfly.  This lets you glide across the air to get past long areas without ground.  The final power-up is a Grasshopper.  This lets Sasha jump extremely high to bypass tall cliffs and structures.

Other than power-ups, you want to collect Crystals as you progress through each level.  They are the key to increasing how many lives you have left.  Once you collect 100 crystals, you gain an extra life and then the crystal field resets until you collect another hundred.  They’re very similar to how Gold Coins work in the Mario series.

In its entirety, Blue Beacon is a total of twelve stages long, some consisting of an outside environment and some within large towers for you to climb.  As such, it isn’t a very long game.  Each stage has a five-minute timer for you to complete the stage by, though you can complete each stage in an average of about 2-3 minutes.  Once you get the groove of the game down, it shouldn’t take you more than about 30 minutes to run through the game once.

Being a throwback game to side-scrollers from the 1980’s, Blue Beacon does not have very extensive controls.  One thing to make note of is that this was a game designed specifically for use on the Vita, rather than Sony phones and tablets.  This is apparent with the fact that there aren’t any touch-based controls.  The entire game must be controls with the buttons on the system.

Moving Sasha left or right around each stage is done with the D-Pad or Left Analog Stick.  She can jump by using the X Button, which is also used for activating the hover ability of the Butterfly Power-up.  The Square button is used for running to make long jumps or to use the Charge attack for the Beetle Power-up.  Other than these, the Start and Select buttons can be used to pause the game.

None of the other buttons are used at all, so this is a very simple game to learn to play. 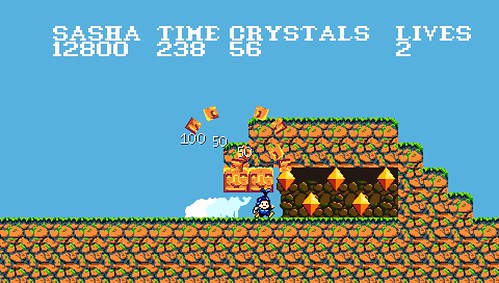 The presentation is what will separate our review from other reviews of this game’s debut on PlayStation Mobile.  This is because we didn’t review it right away.  We waited for something, which will be explained in a moment.

Visually, Blue Beacon is 2D-based and looks somewhere between the NES and SNES eras of gaming.  It has that nostalgic look to bring back memories of the late 80s and early 90s for gaming.  Each visual is pretty crisp, for the most part and flows together well.

The game also runs well, for the most part.  We aren’t talking 30 or 60 frames per second, but the game runs smooth, as you would expect a game like this to.  Though there are two things worth mentioning about the game.  The first are load times.  Being a PS Mobile title, it takes the game about 15 seconds to boot to the Title Menu and about 12 seconds to start a new game once you select to start one from the Title Menu.

Another is that the frame-rate doesn’t stay perfect throughout the entire game.  This is most noticeable within the Tower stages, but the game has a big of fidgeting with the flow as you play through these stages.  It’s not like pressing a button and not having your character move until seconds later, but it doesn’t run smooth like the outside stages do.

One final thing to note is that this game was not originally a full-screen Vita game.  When this game first released, the entire screen of the game was cropped on the Vita’s display to about the size of a Game Boy Advance screen.  This included the menu and gameplay.  Since then, the developer has been gracious enough to patch the game so that it runs full-screen on the system.  If you have this game and downloaded it before May 22, 2014, delete it and download it again to play in full-screen mode.

All in all, Blue Beacon is an interesting throwback to the old 80s side-scroller games, like Super Mario Bros.  While there are some minor issues with the frame-rate in a few of the stages, the game is worth the $2.49 price tag if you want a pick-up-and-play side-scroller on the go.