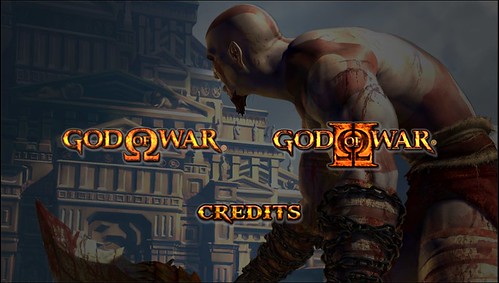 HD Collections and Remasters have been a big deal for more than 5 years now.  Various consoles and platforms have seen HD Remasters of many previous games, though the majority of those games come from the PlayStation 2 era.  On systems like the PlayStation 3, the only non-PS2 HD remasters that I can think of are the remasters of the Resident Evil “Chronicles” games.  Regardless, HD Remasters have been and still are a very big deal.

When you look at the PlayStation Vita, they have been getting HD Remasters as well.  Early on, the portable platform got its own version of Metal Gear Solid HD Collection, which included the remastered versions of Metal Gear Solid 2: Sons of Liberty and Metal Gear Solid 3: Snake Eater.  Since then, many other collections have come to the system, from The Jak Collection to Final Fantasy X | X-2 HD Remaster.  Not all of them have received the praise their console counterparts have gotten, but the main consensus is that having PS2 games, in completion, in portable form is a big deal.

Recently, Santa Monica Studios, with the help of development team Sanzaru Games, Inc, brought one of the first HD Collections onto the PlayStation Vita.  From back in 2009, the HD versions of God of War and God of War II have come to Sony’s handheld platform.  Critics aside, how does this game stack up?  Is it just as brutal and violent as its console counterpart?  Today, we will find out.  Here is our official review of God of War Collection. 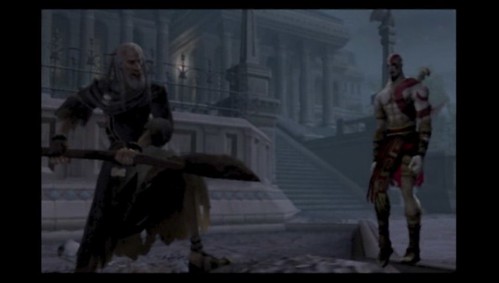 The plot of God of War and God of War II are heavily based upon Greek Mythology.  Far before the events of the first game, Kratos, a general of the Spartan Army becomes a servant of the gods of Mount Olympus, carrying out tasks for them.  When the first game begins, we see Kratos traveling on a ship and purging Poseidon’s oceans of the Hydra, a giant several-headed beast that is terrorizing the seas.  Soon after, he finds out that Ares, the God of War, has begun to wage a war on the Goddess, Athena’s city of Athens.

As the plot of the two games unfold, you are tasked with traveling the mythical world to take down Ares to forgive the sins of your past, and to find what fate has in store beyond that.  I am afraid I cannot detail the story of God of War II as it would have direct spoilers for what happens at the end of the first game.  In short, the games detail a morphed version of Greek Myth tied with the history of a brutal warrior whom travels with the goal of ridding himself of painful memories of the past all while slicing through every mythical creature imaginable along the way. 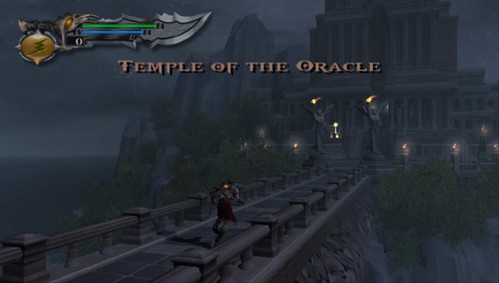 Both God of War and God of War II are Action-Adventure games crossed with a heavy amount of platforming and puzzle-solving.  You will be traveling through many large areas from Greek Mythology, some real and some made for the series.  As you do so, you will be opening chests and doors, collecting puzzle items, and slashing your way through everything that stands before you.

As you go through each area, there will be a relatively linear path for you to follow.  You will be running, jumping, and swimming to get to a goal, whether that be a treasure, boss fight, or scene.  There will be some areas with branching paths, but those paths normally do not stray far from the main path.  It is not easy to get lost in these games.  As you go through each area, there are also many things to find, from Key Items to Power-Ups to Chests to Puzzles, which normally open locked doors or areas.

Chests contain many different types of items.  When you open them, you will either be rewarded with Health Orbs that restore your HP bar, Magic Orbs that restore your Magic Bar, Red Orbs that can be used to power up skills and weapons, Gorgon Eyes that can be collected to increase your Maximum HP, or Phoenix Feathers that can be collected to increase your Maximum Magic.  You will find that there will be times where you need all of these as you progress through the game, even if you’re on the Easy Difficulty.

It’s essential to fight as many enemies as possible, regardless, because of the Red Orbs you’ll obtain from defeating them and from opening chests.  Red Orbs are the key to making the fighting manageable because they upgrade your weapons and magic.  When you first start out, you will have very basic abilities.  However, when you level up/power up weapons and skills with Red Orbs, they unlock new abilities, increase their range, and become more powerful.  Poseidon’s Rage, for example, can go from affecting enemies that are right next to you to affecting every enemy in the room. 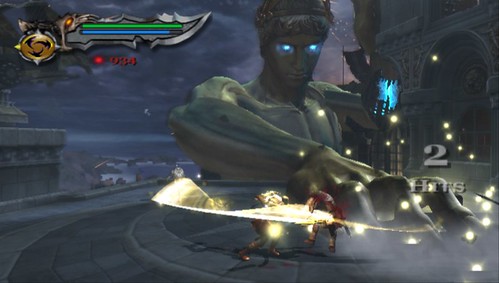 Apart from combat, puzzles are also a big key to progressing.  As you go through each temple, city, and area, you will have to combine platforming with brain-storming to solve puzzles.  Some puzzles are as simple as getting an item to use in a door as a key.  Others require you to rearrange large objects by dragging them across rooms before the spike pit below you skewers you into a million little pieces.  Some of them are really tricky and even I had to look up the solutions online after many failed attempts.

As far as time is concerned, these games aren’t incredibly long, but also not incredibly short.  The minimum amount of time to complete each game would be about 7-9 hours on the Easy difficulty, resulting in about 20 hours to complete both games.  That’s also assuming you don’t dive into all of the extra minigames and content that unlock after completing the game once.

The controls of God of War and God of War II and identical to one another, and it’s not an incredibly deep control scheme.  While you will have to use pretty every button available on the system, it’s something that you will use enough of to be able to learn, though not all of it is explained to you very well.

You use the Left Analog Stick to move Kratos around and steer him when he’s jumping, and you can use the Right Analog Stick to perform a Dodge Roll.  The X button is used to Jump and Double-Jump, Square is used for Light Attacks, Triangle is used for Heavy Attacks, and the Circle Button is used to grab an enemy to perform a Finishing Move.  The L Button will be used to guard against incoming attacks, and the R Button is used to activate your currently-equipped skill/magic.  The Touch Screen and Rear Touch Panel are also used here.  You use the touch screen to change weapons as well as performing a couple of abilities you learn as you level your weapons.  The Rear Touch Panel is used for interacting with people and objects.

The control scheme isn’t bad, though the Rear Touch Panel controls do get annoying as you play.  If you play and graze your finger over that panel, it will count it as using that option.  I found several times where I was loading a save file and before I could get away from it, completely, it thought I wanted to save again.  It’s a minor thing, but gets pretty annoying the more it happens.

There is also an issue with the fact that the game doesn’t tell you what controls do what.  When I first got the Artemis Blade, I had no idea how to switch to use that weapon.  It wasn’t until I accidentally tapped the touch screen, and they switched that I realized that’s how you did it.  The other notable control that wasn’t explained was how to perform the Dodge with the Right Analog Stick. 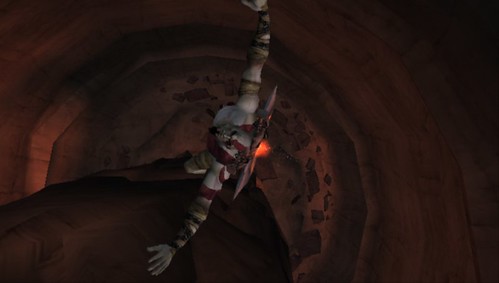 Once again, this is the most important part of the review.  If you have seen any other thoughts and opinions on this collection around the net, you’re bound to see some negative opinion on how the game plays.  The game doesn’t play as well on the PS Vita as it does on the PS3.  When you are fighting enemies, there will be some fidgeting and lagging with the framerate.  This specifically happens when your attacks hit an enemy.  However, there are also sections where everything slows down for awhile.  This is present in both games, but much more apparent and obvious in God of War II.

Something else worth noting is how scenes are portrayed.  Rather than optimizing them for the PlayStation Vita’s resolution, story scenes are cropped in their original resolution.  So, when story scenes play out, they look like cropped squares in the middle of the screen.  Is this terrible?  No, but it doesn’t look good, either.

One final thing of note is something they can fix in the future.  Trophies.  There are trophies for both games, and they’re the same trophies that are available for the PS3 versions of these two games.  However, whether they unlock is another story.  When I first played God of War, I went through nearly half the game and not a single trophy unlocked, nor did the Trophies application even register I had played the game at all.  When I restarted God of War upon switching Memory Cards, it did register and the trophies did unlock afterwards.  I’ve spoken with several other reviewers and the story is the same.  Right now, it’s random as to whether or not trophies will register at all.

All in all, this is God of War and God of War II in portable form.  The base games are good games, as they were on the PlayStation 2, and look far better than the PSP God of War games that the Vita can play.  However, there are a lot of technical problems right now, from frame-fidgets to random trophies to cropped story scenes.  The collection is still a good collection and worth the purchase if you’re a fan of the series.  However, it felt like it could have been executed much better to get these glitches out before release.  If you have a problem with framerate glitches, buy at your own risk.