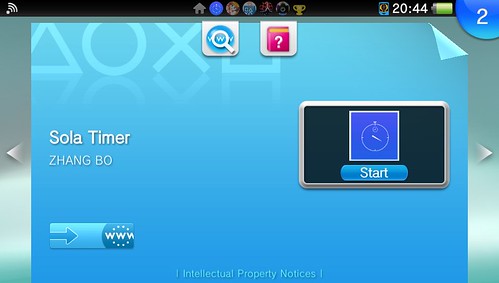 When you think about Apps and the PlayStation Vita, you will realize there just isn’t a huge library of apps out there.  Even today, when I was trying to find an app to review, I had to look through my Download List because I have already reviewed all of the apps I use on a regular basis, from the Vita and PlayStation Mobile.  That goes to show that the library of apps available on the system is relatively small, despite growing steadily from the PlayStation Mobile side.

On the PlayStation Mobile side, however, is where most of the apps reside.  The Vita has some great apps but it needs many more to be side-by-side with PlayStation Mobile.  That service gets new apps in nearly every update, and that’s a pretty big deal for those of us that want more apps on the Vita.  One developer in particular is ZHANG BO, whom has contributed a lot of apps to the Vita, two of which we have reviewed.

Among the various services and features that ZHANG BO has given us through PlayStation Mobile, there is one that we are going to take a look at today that is two features in one.  What I mean by that is that it is one app, but it does two different things.  Keeping time is important and very handy to be able to do with the aid of an app.  Here is our official review of the PlayStation Mobile app, Sola Timer 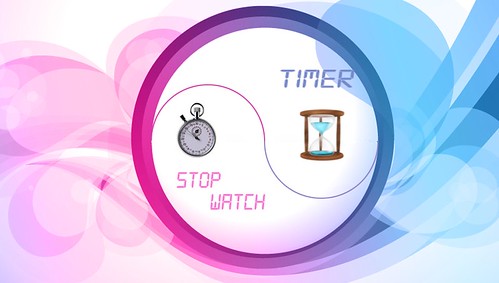 As far as what the app does, it may do a little more than you’d expect it to.  While it’s not like a Clock/Timer app for a smartphone, it has more to offer than just its name.  When you hear the name Sola “Timer”, you think it will be a Timer, right?  Like a Kitchen Timer, where you can set a certain amount of time to pass before something is done.  I use that sort of thing all the time when I am cooking and baking, or even on a computer, when certain amounts of time needs to pass before doing something.

The app does this, which is very true.  However, that’s not all it does.  When you boot up the app, you can go into its “Timer” mode to use it as a timer.  However, you can also use it as a Stopwatch.  While this other feature isn’t included in the title, the functionality options for this are there in the app, which will be explained in more detail later in this review.  Though the main point of this is that, despite being called Sola Timer, it is both a timer and a stopwatch.

The Timer part of this app will let you set your own time for it to count down to.  There are limitations, though.  You can set the Hour, Minute, and Second fields.  The Hour field can be set from anywhere between 0 and 60.  However, the Minute and Second fields can only be set from 0 to 59.  While this isn’t a huge deal, and makes sense, it just shows that they have one less adjustment option than the Hour section does.  Once you set a timer, it will count down and make a loud buzzing sound when it reaches zero.

The Stopwatch section of the app is a little less complex.  When you go into it, you can set your Stopwatch to start counting at any time.  It measure in decimals of seconds, so it will be a pretty accurate reading for whatever you’re using it for.  You can also set it for Laps or for the time to be Split when you wish to split the time to find different times, whether you’re running laps in a gym or recording Load Times for a game on another system.

Apart from this, the app doesn’t offer much.  It is a simple app that lets you use it as a stopwatch or a timer.  It doesn’t add anything fancy, like clocks or naming your timers, or alarms, like most smartphone apps do, but it has basic functionality for a timer and stopwatch. 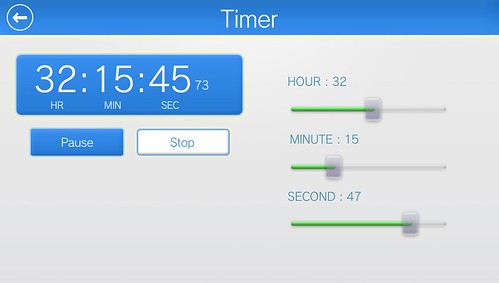 The app doesn’t have a whole lot to it, but what it does have in its design is pretty simple.  While the app is purely touch-based with controls, everything is lined out for you with clear, obvious buttons that you can tap and use.  When you first boot up the app, you will be taken to a screen that gives you two options, weaved together in a ying-yang-like shape.  One is for the Timer and one is for the Stopwatch.  Tapping on either of these takes you to the screen for that feature.

On the Timer screen, you are given five buttons to use, as well as a Back Arrow button to go back to the Main Menu.  Two of these buttons are the Start and Stop buttons, used for starting and stopping the timer.  The other three buttons are dials that you can slide to set how long you want the timer to go for.  There is one by Hour, one by Minute, and one by Second.  Each of these buttons is very large and easy to use with your finger. 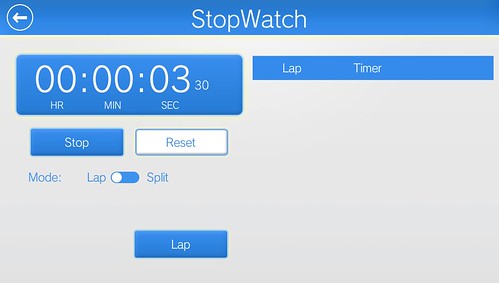 The biggest downside of PlayStation Mobile is, without a doubt, Load Times.  It is well-known among the Vita community that PlayStation Mobile titles take a good while to boot up.  There are some apps and games that take 20 seconds or more just to get loaded to the title menu.  That’s quite a long time, if you’re just sitting and staring at the screen.  So, how does Sola Timer match up to that?  It does quite well, actually.  Booting up Sola Chat and getting to where you can choose what you want to do only takes 7-9 seconds.  It’s not convenient, but it’s better than most PlayStation Mobile apps can do.

Apart from that, there is another thing of note as far as how the app runs that is worth noting.  When you are choosing your option of what to do from the Main Menu, either going into the Timer or the Stopwatch, there is a big of lag.  When you tap on either option, there will be a 3-second delay before it actually loads the screen so you can use each service.  While this could worry you, the actual buttons to start and stop the Timer and Stopwatch do not have this delay.  They start the second you tap the option to start.

Another very important thing to note is that this will not run in the background.  If you have a Timer set for 15 seconds and go back to the Live Area to look at something else at the 12-second mark, it will still be at the 12-second mark when you go back into the app.  The only problem with this is the fact that the Vita has an auto-sleep feature.  If you leave the system alone for too long, the screen will automatically dim itself and, eventually, go into hibernation.  Since this app cannot run in the background, your timer just got stopped.  Unless you are actively using the system, which means watching the timer or pressing buttons every so often, it will turn itself off.  This makes it very inaccurate, if you want the timer to go while you do something else.

All in all, this is what we have come to expect out of ZHANG BO’s work.  Sola Timer runs basic functionality for a timer and stopwatch app.  It is very precise with control input, but the fact that it cannot run in the background and will stop if the system goes into hibernation holds this back from being a great Vita app.  It’s competent, but not one of PlayStation Mobile’s best.