The PlayStation Vita has been around for three years and there have been select titles before this year that were must-haves on the system.  Must-Have games are games that everyone mentions that you need to get for it once you start talking about a system.  If you were talking about the PS3, people would say titles like God of War III and Metal Gear Solid 4: Guns of the Patriots.  If people talked about the Nintendo Wii, it would be Super Smash Bros Brawl and Legend of Zelda: Skyward Sword.  But, what are the titles when you mention the Vita?

The answer is Persona 4 Golden.  Persona 4 was a huge PS2 hit and also a big Vita hit.  It also showcases a very unique situation on the portable platform.  There are a few gaming franchises that, thanks to backwards compatibility with PSP and PS1 games, are almost completely available on the Vita.  Final Fantasy was a big starter with us, having the majority of that franchise’s main games.  Another series for that is the Persona series.

The Vita has access to five of the six announced Main Series titles for the Persona series.  Seeing this, we have decided to start a review series for the Persona games, reviewing them one by one.  To start things off, let’s talk about the original game.  Originally called Revelations: Persona on the PlayStation, and remade for the PSP as Shin Megami Tensei: Persona, here is our review of the PSP title, Persona. 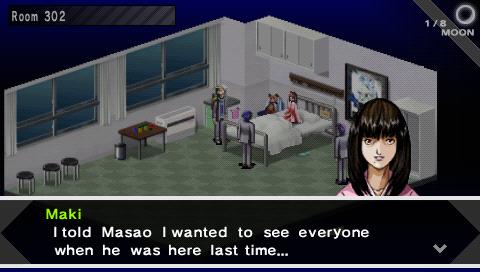 The story of Persona takes place in the Japanese town of Mikage-cho.  In this town is a large group of friends from St. Hermelin High School.  From the beginning of the game, the students take part in a game called “Persona”.  Similar to the mythological Bloody Mary game, they all perform this ritualistic game, in the hopes of meeting creatures called Personas.  After invoking a force they hadn’t foreseen, they’re given the power to summon reflection personalities of themselves, known as Personas.

Shortly after this ritual is completed, they visit a friend in the hospital and are made aware that the reality and universe around their town has been blocked off, morphing into something else, and the streets are infested with demonic monsters.  The group of friends, led by a nameless protagonist, sets out to find the truth behind the power of Personas, as well as what is causing the town to change.

The story of Persona is most definitely dated.  The dialogue is full of vague clichés and the characters don’t act as serious as they ought to during the reality-altering events of the story.  However, it is still an entertaining story that mixes fantasy with science fiction to bring a decent story, along with the Snow Queen path of the story, which wasn’t included in the original version of the game. 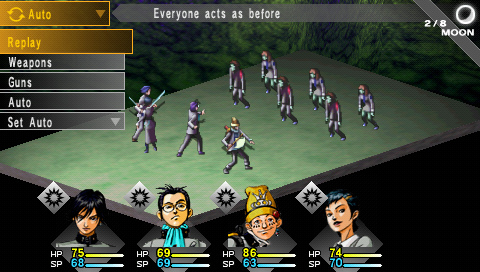 Persona is a unique game to play on the Vita, because it uses a very unique system to traverse as well as to battle.  Those that have played the more recent Persona 4 Golden may find the original game’s gameplay style very much different, especially when exploring dungeons and collection Personas to use in battles.  The first of which is that there are two different storylines for the same game.

The storylines are set into two paths, chosen by dialogue.  Throughout the game, you will find situations where you have different choices of what you can say to another character.  What you choose for every one of these can heavily impact the game.  Not only can it impact what kind of ending you will get as well as which characters will join your party, but it also affects how the storyline plays out.  Early in the game, you can choose to go through the SEBEC story path, which is the main story, or the Snow Queen story path.  This is not laid out to you, so you will need a guide to know where this is.  Later on, there is an even more important area here choosing an incorrect option will immediately give you the Bad Ending path.

Outside of the storyline, though, you will be traveling through your town to discover what’s happening to your town, upgrading your arsenal, and taking down Demons.  Unlike Persona 3 and Persona 4, you don’t go into a different world or reality when you want to explore dungeons.  Persona 1 is a story-driven game where you travel from place to place and don’t retire to your home each night.  You will travel along a Map of Town and enter areas to advance the story to the next sequence until the end of the game.

Each area has two different forms of exploration.  The first is the grid-like rooms you can walk through.  This shows your character’s sprites on the screen and you can move from grid to grid as you explore the room.  This is the first point in the gameplay, where it will look dated, especially when compared to Persona 4 Golden.  It uses a completely different style of traveling.

Dungeons are the most interesting, though.  When you’re in a dungeon, you aren’t using a grid-like area to move.  Dungeons are set up as first-person dungeon crawlers, much like the dungeons you see in games like Demon Gaze.  The Map will mostly be made already as you traverse through areas, and the dungeons are pretty simple, containing a few traps as well as rooms for Save Points, Healing Fairies, and “Bridges” that connect one dungeon to the next.

Along with dungeons and the Map, there are Shopping Malls you can explore, as well as the Velvet Room.  Shopping Stores will sell items like Medicine, weapons, and armor.  It’s important to always keep up on armor.  Once thing Persona has that is unique is guns.  Your character equips a weapon, like a sword or bow, but can also equip a gun as well as ammunition types.  Each character uses a different type of gun and this can be very important for some fights.

The Velvet Room is much like in the other games.  You will find Igor there, and he can help you create Personas to equip.  However, obtaining Personas isn’t quite as easy in Persona, as will be explained later.  In the Velvet Room, you can fuse Personas into more powerful ones using Spellcards.  Personas are created at certain levels and you can use items in fusions to allow for extra abilities to be learned.  As Personas come out, though, only a user with a Persona Level equal or greater than that Persona’s level can equip it. 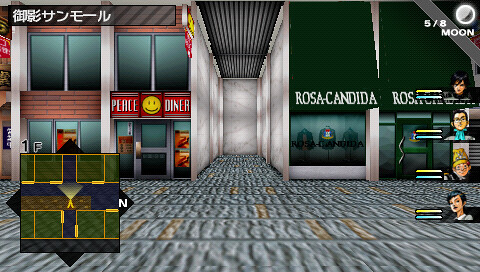 Fighting battles is done in a turn-based sense.  Your party (5 characters) chooses commands and the enemy party chooses commands.  Just like in other Persona games, each enemy has a weakness you can exploit, whether that be an elemental spell, physical attacks, or using guns.  You also have attacks that have specific ranges and can only hit enemies in that range, making character positioning very important.  One handy feature for battle, though, is Auto Battle, allowing you to have everyone fight for you, whether it be their last commands, or something more specific.

The most important part of battle, though, is Negotiating with Demons you fight.  Demons can actually be obtained as Personas for you to equip on any of your characters.  However, you don’t win their cards in battle.  You must negotiate with them to allow them to give it to you.  This requires two things.  First of all, you have to say the right things to them.  Each character can do different actions in Negotiations and it will increase various traits of the demon.  Increase the wrong trait and they will get angry and attack you.

The other aspect is level.  Characters gain experience in battle and level up both their level and Persona level.  Persona level determines what kind of Personas they can equip, but the levels also determine whether demons will give you their Spellcards, used in the Velvet Room for fusions.  If your level is too low, they’ll refuse to give you the cards.  Getting the cards, though, has uses.  Other than the Velvet Room, you can use Negotiate for a demon you have the card of and they will immediately leave the fight and give you items or money.

However, one last thing to note is that you can only hold 12 Spell Cards at one time.  If you hit that limit, you need to go and fuse some of them together at the Velvet Room in order to obtain more.  A big key to making the game easier is to always upgrade Personas in each area.  It takes time to Negotiate, but is worth it with the higher-leveled Personas you can obtain to help you win Boss Fights.

Finally, let’s talk about time.  Persona has two different story paths to go through, so if you want to see everything it has to offer, you’ll have to play the game twice.  For a single play through the game, though, expect to spend at least 30 hours to get through the Main Story, assuming you don’t spend a long time grinding for levels and Spell-cards.

The control scheme for Persona is a pretty simple one.  Even for a PSP game, Persona is a remake of a PlayStation game, so there isn’t a lot to be done with the controls.  Though, it is worth noting that, as with all PSP games, you can add any button you want to a corner of the touch screen and rear touch panel.

You can move your character on the world map or in dungeons with the Left Analog Stick or D-Pad.  This is also used for cycling through various menus.   The X Button is used to confirm a selection, Circle is used for going back, Triangle for opening up the Menu, and Square for pulling up a map when you’re in the middle of a dungeon.  The L button doesn’t have any use, but the R button can be used to Analyze enemies while in battle.

The control scheme is very basic and, while it isn’t laid out or explained to you, it’s pretty easy to figure out and get used to. 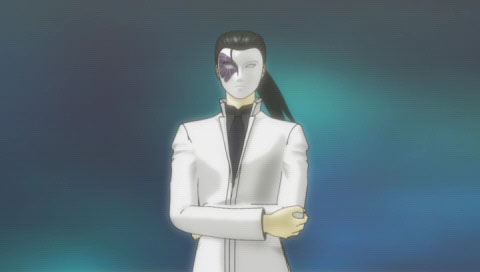 The visual presentation of Persona is interesting, though I wouldn’t call it superb.  The art style of the game definitely looks like an older style of Manga art.  There is a basic amount of detail into each area and character portrait, but it is set simply in a 2D fashion.  There is no depth or 3D aspect to the style of artwork displayed in the game, outside of the first-person dungeons.  It doesn’t look terrible, but it does look dated.

The area where the visuals shine are through the CG cutscenes.  You will see CG scenes every so often for major story events.  Those come complete with voice-acting and 3D visuals.  These looks very crisp and clear, even stretched out on the PS Vita’s screen.

The game plays and runs very smooth.  The initial load time for a save file is pretty short.  Once you load a save, you should be set for exploring the game’s world in a matter of seconds.  There is no sign of lagging or slowdown as the entire game runs very smooth and fast.

Persona is definitely a game that feels dated.  Through the artstyle, clichéd storyline, and the slow battle system, this game is definitely an old RPG.  There are also a few things that are a bit harder in this title, such as Negotiating with Demons to get spell-cards in order to use new Personas.  It definitely isn’t as advanced as the newer titles, but for a Persona fan or classic RPG fan, it’s a game that should definitely be played at least once.