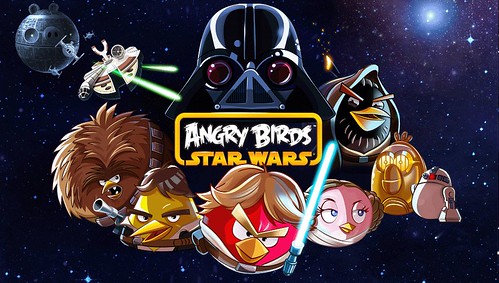 Mobile Gaming kicked off with key franchises.  While games on smartphones started come up when they were releasing ports of console games, like Final Fantasy and Chrono Trigger, there was a growing crowd of both gamers and games that were well-attuned to mobile gaming.  Particularly to games that weren’t incredibly deep, but people enjoyed using them to burn away their free time.  That stayed steady until one franchise rose up and took the world by storm.  That game was Angry Birds.

Angry Birds was a simple game and it baffled people as to why it was so successful.  You see, these birds are really angry at these pigs.  So, the ball-shaped birds attach themselves to slingshots and toss themselves at buildings and construction around the pigs to destroy the structures and kill the pigs.  It was one of the weird games, but was fun for just wasting time on your phone.  Until it became insanely popular and became a franchise.

Angry Birds has seen many different games, from the original trilogy of games to more themed games like Angry Birds Space and Angry Birds Go.  One series that was particularly interesting that they chose to emulate with Angry Birds, though, is the Star Wars franchise.   Angry Birds Star Wars released, showcasing the gameplay and the birds and pigs, but all in a Star Wars settings.  This game also branched out from mobile and also released on nearly every gaming console on the market, including the PlayStation Vita.  But why would you buy the game on a console for a boatload of money when you can get it really cheap on Mobile?  Is it worth it, even at a sale price of $15?  Here is our official review of Angry Birds Star Wars. 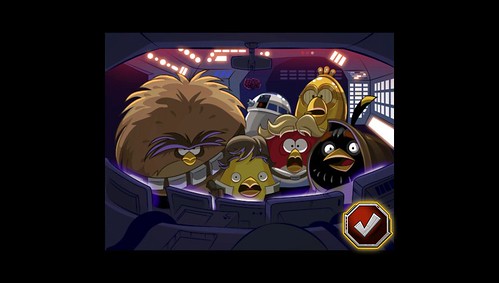 Angry Birds Star Wars doesn’t have an incredibly diverse story within it.  In fact, there’s no dialogue in the game at all.  Once you get to certain stages, you will get a little scene, showing stills of a scene from one of the Star Wars movies, showcasing it in Angry Birds characters instead of the normal characters.  For example, showing a round-shaped Pig Darth Vader clashing lightsabers with a round Bird Obi-Wan Kenobi.

Aside from this, it isn’t the entire Star Wars Saga.  This game only covers the original trilogy of movies.  By original, I mean the first movies that came out, but not the first three in the story canon.  The game covers the events of Episode IV: A New Hope, Episode V: The Empire Strikes Back, and Episode VI: Return of the Jedi.  There are some other areas as well that aren’t covering these movies, but there is not story for those areas.  All of the main areas cover those three movies.

All in all, you don’t play this kind of game for the story.  The scenes and art is cute if you’re a Star Wars fan, but that’s about it for the story.  Nothing is really explained that much if you don’t already know the storyline of the movies. 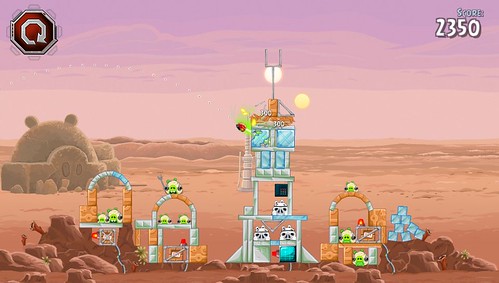 The gameplay of Angry Birds Star Wars is the same on the Vita as it is on every other system, including iOS and Android.  You will be playing from stage to stage, flinging birds from a slingshot to knock down structures and defeat every Pig Enemy in the stage.  Each stage has this setup, and it gets harder as you progress further and further into the game, but also has bonus items you can find in stages to unlock Bonus Stages for the end of the game.

The strategy and challenge that comes with the game is that you have a limited number of birds you can use.  For example, you might only have three birds.  You have to be able to defeat all enemies while using those three birds or less.  If you use all of your birds and there are still enemies on the screen, you get a Game Over screen and must retry the stage until you are able to defeat them all with only the three birds.

Angry Birds Star Wars is unique in that each bird is based after a Star Wars character and has abilities that can be used, based on that character.  For example, the Yellow Bird is based on Han Solo.  When that bird is in mid-air, you can have it use a blaster to fire off three shots at part of a structure to try to get it to fall over.  Similar to that is that the Black Bird is based on Obi-Wan Kenobi and can hurl objects in a certain direction by using a Force Push.  Each bird has its own specialty that you’ll discover as you play the game.

When you finish a stage, you get a rank, in the form of one, two, or three stars, depending on how many birds you did and how much of the structure you broke.  It’s possible to get three stars on every stage.  Collecting Stars unlocks power-ups, like the Millenium Falcon, which can be summoned in a stage in place of a bird to perform a flyby assault on the stage.

As far as content goes, this is just like any other version of Angry Birds Star Wars.  It has areas and sections for Tatooine, Space, Death Star, Hoth, Cloud City, and so on all the way to Death Star 2, when Return of the Jedi Ends.  It also has Bonus Stages which can be unlocked as you find Bonus Items in certain stages.  As with the other console versions, the PlayStation Vita also has 20 stages that are exclusive to the console release, which Mobile doesn’t have access to.

All in all, there are over 200 stages to proceed through, whether you want to go solo or use Multiplayer.  The game’s box boasts that it lasts 25 hours, though I would say it’s more like 5-10 hours.  Unless you have a really, really hard time with some stages, it shouldn’t take that long.  Each stage I’d say should last an average of 2 minutes.  Actually beating the stages will take much less, but that’s time for retries as well as strategizing.

Controls is an extremely crucial part of the game’s review.  Exient Entertainment worked on the console version of this game, and they implemented means that sound logical.  Since the Vita has a touchscreen, the game can either be controlled by the buttons of the system or with the front or rear touchscreens.  The touch controls work fluidly, just like the Mobile game.

As far as the button controls go, you can aim a bird or weapon/special with the Left Analog Stick.  The Right Analog Stick can be used to peer over at the further parts of a stage you’re on.  The X button is used for launching your bird as well as activating its special ability.  The Square Button can be held down to retry a stage, and the Triangle Button can be used for using power-ups.  The button configuration is pretty simple.

It’s simple, until you start grazing your fingers on the touchscreens.  Both the touch and button controls are activated at the same time, and neither can be deactivated.  I found many occasions where I would release a bird with the X Button and they would almost immediately use their special before I could do anything.  Why?  Because my finger grazed the rear touch panel.  This was not just a one-time thing, either.  It happened all the time.  It eventually got to the point where I completely abandoned the button controls and only used the touch controls. 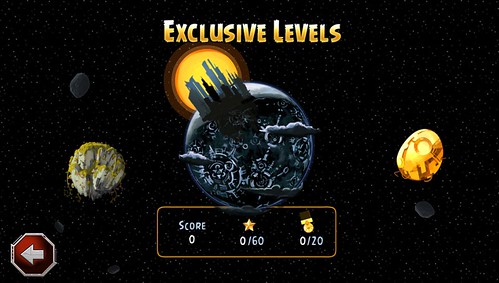 Visually, the game looks great.  It looks just like it does on any other system, but optimized for the Vita’s screen resolution.  Everything looks crisp and clear.  No jagged edges or deformities in the art style, despite the fact that the Vita has a much larger screen than, say, the iPhone.  If you like the visual style, then you’ll definitely like to see it play out.

As far as loading goes, the Load Times aren’t bad.  Aside from the initial load when you first boot up the game, which can take a good 20-30 seconds, the load times are comparable to the load times of the Mobile version of the game.  You won’t be waiting much longer than a few seconds between stages.

However, there is a bit of a technical hiccup with the menu while in a stage.  If you go into a stage, and try to go to the menu, it lags and is jumpy when it tries to load the menu.  You also have some slowdown when choosing options in in.  The buttons will lag when cycling options and you may have to tap on an option several times with the touch screen before it will go through.  It’s a pretty big annoyance.

Angry Birds Star Wars on the PS Vita is still Angry Birds Star Wars.  If you really want this game on your Vita, it’s not a bad game.  However, with technical difficulties and the fact that the control schemes easily clash with one another, forcing you to do far more retries than you should, it should be advised to watch for a sale on it.  Not to mention the fact that on a good sale, you’ll be paying a good $15 for the game, whereas you can get it for about $5 or less on the Mobile platforms.