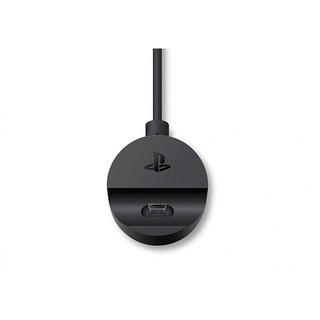 When we thought about expanding our site, there were a lot of different ideas that came into our heads.  Events.  Giveaways.  More frequent reviews.  We even thought of the possibility of someday adding the site’s very own forum (though we believe we need to have the site more active to have the latter be a success).  But, when it comes down to it, we are here to provide you with reviews, and we thought about what we could possibly review that wasn’t games or apps.  We thought back when we reviewed the Vita Slim model, and then it hit us.  We could do Hardware Reviews.  Not just systems, either.  But other hardware, like peripheral attachments.  Chargers, USB cords, Memory Cards, Triggers, etc.

I will admit that I don’t have a lot of peripheral devices and accessories for my PS Vita, but that doesn’t mean no one does.  I know a handful of people who use Trigger Grips with the original model of the system, and that got me expanding a bit.  With the release of the Vita Slim in the United States, we decided to find a peripheral that was exclusive for that model.  If you’re an import-friendly gamer, and you have or plan to soon get a Slim PS Vita, here is our official review of Sony’s “Cable with Stand” that we are calling the Slim Charging Cradle.

Since this is one of the very first peripherals made to utilize the Slim model’s micro-USB port, Sony opted to make this Cradle Charger much like the console that it works with, slim.  Easily about 25% as large as the cradle that Sony has made for the original model, the Slim’s cradle is very small and slim.  The entire cradle section of the device is no more four inches long and wide. Tie that with a twenty-four inch USB cable that is attached inside it and you’ve got a very travel-friendly piece of hardware.

The design and material is the same as that of the charging cables that come with the PS Vita, and that Sony had used in the past with the PSP Go.  The cable section of the device is made of thick rubber and the entire cradle is made of a slick rubber material that feels neither soft nor hard, but a combination of both.  When you rub your fingertips across it, it feels like you could bend it out of shape with ease, but has enough durability that it won’t budge if you try.

Sony also included some pieces in the design so you know it’s a sleek little piece of hardware from them and, despite sharing a micro-USB connection that a host of other devices use, was made for their portable system.  On one side of the USB side of the cable and on the very top of the cradle-itself are engraved PlayStation Logos.  As well as this, the bottom of the cradle has an engraved PS Vita logo on it, so no matter who sees this, they can always tell exactly what this was made for. 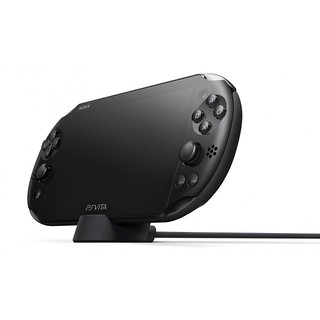 As far as functionality goes, what all does the Cradle Charger do?  Essentially, if you go by the original product name used on sites like Play Asia and the like, this is a charging cable that doubles as a stand.  Which is very true.  Essentially, it’s a USB Cable where the port that goes into the Vita functions as a cradle or stand for the system, making it available to be able to be propped up while it’s charging or connected to a device, such as a PC, PS3, or PS4.

Upon opening it up, using this peripheral is very easy to do.  It doesn’t come with any sort of instruction manual or anything.  You just slide the system down into the cradle section until the Micro USB port connects and the system “clicks” to be able to sit there with its connection, and you plug the other end into some sort of USB port, whether it be on the side of a computer or in a power cord with an open USB port.

The latter is one important bit of info you may want to know about this little piece of technology.  This cradle is a USB cord and not a complete charger.  While it does function as one, you will need to have your own USB/AC adapter before using this.  Whether it be the default adapter that came with the system or one of the lightweight adapters with open USB ports that come with iPhones or iPads, you will need some sort of AC Adapter in order for this to work as a charger.

How does it perform?  Does it charge faster or slower than other chargers?  How durable is it?  As far as charging speed goes, we did test this against three other Micro USB chargers, including the default charger that comes with the system.  We let the battery drain for exactly 20 seconds and plugged each charger in to see how long it took for them to charge the system, and each from the same electrical outlet to ensure accuracy.

In short, it runs the same as any other charging cord.  It can charge enough power for 20 seconds of use in about 4-5 seconds with the brightness on high and the Wireless connections on and available.  While this would vary, depending on the electrical outlet, it was the same timeframe that we got from all of the other charging cables and adapters.  It’s up to snuff with the others and lets the energy flow through just as easily as those others, despite its small size.

The cradle, itself, is also something that’s uniquely useful.  Given that it’s only a few inches wide, it doesn’t look like it would be very sturdy or even be able to hold the system firmly without tilting and falling over.  That is one worry that we had when we decided to buy and import this peripheral.  Once we had time to test all of this out, we were shown that our worries were far more than they should have been.

When you click the system into this charger and set it down, it balances itself really well.  As soon as we set it down, we had no issues with tilting or wobbling, no matter the surface.  Whether it is sitting on a hard, wood shelf or on the soft sheets and mattresses of a bad, it’s like this device was made for standing and nothing else.  Whether soft or hard surface, the cradle stands upright well, whether there is a system in it or not.  The flexibility of the cord also plays a part here, letting you move its position with ease.

Another nice feature that we stumbled upon by accident was the durability of the connection the cradle has over the system.  Sometimes, cords accidentally get yanked when you’re using more than one in the same general area.  So, what happens if you accidentally pull on the cord and the cradled PS Vita falls off a table or desk?  At first, you would probably want to scream, thinking your system just fell on your hard floor with a shattered screen.  But, the cradle has you covered.  Even when held directly upside down, it did not let go of the system.  While there can be enough force to let it fall, and it will fall out after a few seconds, it gives you enough time to quickly realize what happened and grab the system before a terrible fall were to happen.

One final thing of note is that you can still play the system with the cradle attached to it.  The device is small enough that if you wanted to hold the system while you are, say, sitting on the couch or lying in bed, you can hold it comfortably and never have your fingers and wrists accidentally bump into the cradle.  It feels almost like using the system with a normal charging cable plugged in, but with the ability to easily set it down on a shelf or desk and have it propped up, if you want to leave it or set it there to watch some Netflix or Hulu Plus.

While this cradle charger is currently only available overseas and on places like Play Asia, Western PS Vita owners may yet see this coming over.  For now, though, as an imported accessory, you cannot go wrong with this charger.  While it doesn’t come with its own adapter for an electrical outlet, it is a very slim and lightweight cradle that has high durability and ease of use to make a user’s experience very comfortable.  With a grip-like connection to ensure the safety of your system and a slim design, this is worth importing.