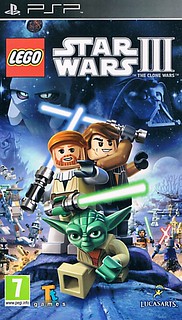 It’s time for our final review of the month of April.  We’ve thought long and hard about our review schedule, new things to try, and what we came up with is a particular PSP game that just recently became available in the PlayStation Store.  You may get at me for what I said in my review of LEGO: The Hobbit, with me only making about one review of a LEGO game each month.  Looks like I’m about to break that, as if it were set in stone.  That’s right.  Today’s review is going to be on a LEGO game.

As you know, LEGO games have had a strange relationship on the PlayStation Vita.  However, on the PSP, it was a different story.  The first LEGO game on that platform was LEGO Star Wars II: The Original Trilogy.  That game was not changed at all.  It was a direct port of the PlayStation 2 version of the game, from the long load times to the perspective to the content.  Everything was exactly the same as if you were playing it on the PS2.  LEGO Batman was also like this on the PSP.  So, what happened?

What happened, we do not know.  Some PSP titles are similar to their PS Vita incarnations, like LEGO Harry Potter: Years 5-7, but some of them didn’t change as much.  There are some games that seem like the full games, much like the PS Vita LEGO Lord of the Rings, but are not.  But, let’s take a look at one of the more recent PSP LEGO games, currently only being able to be found through a search on the Vita store.  Here is our official review of LEGO Star Wars III: The Clone Wars. 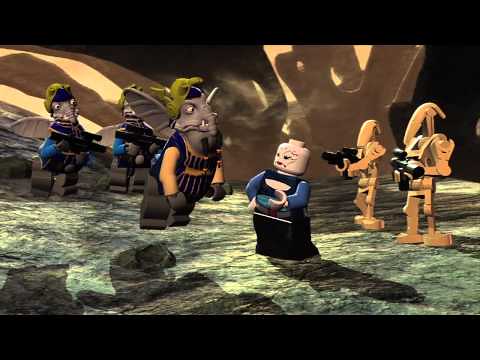 The story of LEGO Star Wars III covers a fair chunk of The Clone Wars part of the Star Wars saga.  Since this game came out long before all seasons of the show had aired, it only covers the first two seasons of that show.  You will take on the roles of characters such as Jedi Knights Yoda, Anakin Skywalker, and Ahsoka Tano, sith Asajj Ventress and Count Dooku, or clones such as Captain Rex or Commander Cody as they fight through the Clone Wars, slowly leading towards the events between Star Wars II: Attack of the Clones and Star Wars III: Revenge of the Sith.

Not all episodes in the two seasons are accounted for, but there are about 14 episodes that are given light in the game.  While they don’t play out exactly the same as they do in the show, they are still represented fairly well, from Jedi Crash to the tense Ryloth arc.  If you’re a fan of the show, you’ll be able to immediately recognize all of these levels as they play out, even without the descriptions before you start each one.

While there are scenes, this game was made before they started putting Voice-Acting into LEGO games.  So, most of the scenes will show important scenes but will have murmurs from the characters, rather than actual talking.  This adds more to the comedy, in some scenes, as the murmurs go well with the blooper-style scenes TT Games portrays. 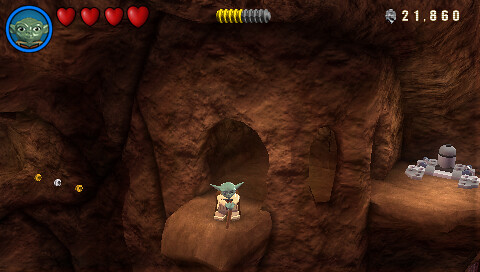 The gameplay of LEGO Star Wars III is similar to its previous entries for the rest of the Star Wars saga.  You take parties of characters through a Lego-fied version of the Star Wars universe and jump across platforms, defeat enemies, and destroy everything that is virtually possible in your path.  This game retains the gameplay that TT Games is known for, long before the now-looked-down-upon games like LEGO Marvel and LEGO Movie on the PS Vita and Nintendo 3DS that doesn’t allow jumping or cameras in a 3D perspective.

In LEGO Star Wars III, you begin at a Central Hub, which is a base of sorts.  Within it are several rooms you can explore as the character you start out in, or switching upon characters you find around the place.  At first, there won’t be many different characters here to switch with, but more will appear as you unlock them in the Story Missions.  You can roam around this place to mindlessly destroy stuff, look at collectibles you’ve found, as well as buying minigames, characters, and extra features for the game.

At the beginning area of the hub, there is a hologram projector, where you can select a Mission to take part in.  There are 14 missions total, and you will need to progress through and complete a mission to unlock the next.  If you’re used to the recent LEGO games on the Vita, then LEGO Star Wars III will be a bit of a surprise to you.  Each level in this game takes places in three “Acts” and they are not quick and short like the more recent games.  Each act can take up to 8-10 minutes and a complete level could take you anywhere from 25-35 minutes to finish.

When you’re in each level, you have a set number of characters when you go through the Story, whereas you can select your own set of eight characters for an Act in Freeplay, which is unlocked after completing the Story Mode version of those levels.  Until then, you’ll be relying on the characters you start with and the ones you find and pick up as you progress through the level.  As you progress, there will be certain objects and areas only certain characters can access, like using the Force with a Jedi or Sith, or fitting into a small door/crevice with a short character like Ashoka or Luma. 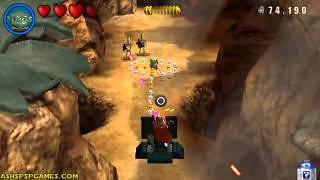 Within each level, there are platforms you have to traverse and studs to collect.  This game has a “True Jedi” feature in each level, with a set amount of studs to collect to obtain that status and unlock extra content for the game.  Studs drop from destroying objects, defeating enemies, or interacting with certain objects in your environment.  You’re not on a time limit, so take all the time you need to find those stuffs.  It’s not unheard of to obtain True Jedi status on most, if not all Story Levels your first time through, regardless of the optional areas you cannot access until Free Play is unlocked.

Two other things to look out for in levels are Minikits and Red Bricks.  While some of these do require Free Play, there are 10 Minikits and 1 Red Brick in every set of levels.  The Minikits will unlock a vehicle to choose from in the Vehicle Levels and the Bricks will unlock bonus features you can buy and activate, like giving you more studs per level or giving you infinite missile ammunition for the vehicles.

There are also two types of missions.  There are On-Foot missions, where you can control characters running around an area, but there are also vehicle missions.  Vehicle Missions are where the true fun starts in the game.  These are mostly Space Battles, where you control a spaceship and are flying around massive cruiser ships and shooting down enemy starships that are attacking you.  This is very unique and important.  It’s important because these are completely 3D Space Battles, like you’d find in the likes of Star Wars Battlefront II, whereas in previous LEGO Star Wars games, where you have an over-top view and just a small grid-like area to fly around and explore.

As much fun as it is to swing your lightsaber around and fly through space with a Jedi Starship, there is a bit of a downside to the gameplay.  While the game plays with the perspective and style that the console version has, something that fans have wanted out of the Vita LEGO games for a long time, it suffers the same faults as the likes of LEGO Harry Potter and LEGO Lord of the Rings.  There’s stuff missing.  This game has 14 levels in it, whereas LEGO Star Wars III on the PlayStation 3 has 20.  They took out 20 levels, including the intro level, which was the Geonosis fight at the end of Star Wars Episode II, when they made this game for the PSP.

Being a PSP game, controls will be relatively light for this on the Vita.  As such, you can redirect some controls to the Right Analog Stick or the Touch Screen, if you would like.  There aren’t that many controls to choose from, but if you’re more comfy with touch controls, that is something you have the option to do.

Apart from the optional controls due to the PS Vita’s PSP Emulator, you can use nearly all of the basic buttons that were on the PSP with this game.  The Left Analog Stick or D-Pad can be used to move your characters around the map and Start to Pause the game to access extras or exit back to the Control Hub.  The Face Buttons access most of the game’s controls.  X is used for Jumping and Double-Jumping, Square is used for the default attack command, Triangle is used for character specific attacks, and the Circle button is used for the Force or for assembling LEGO creations.

The L and R buttons are used for switching characters in the on-foot missions.  They allow you to cycle through your selection of characters in order, depending on which of the two buttons you decide to press at any given time.

It’s not a hard control scheme to get used to, though there are quite a few buttons that are used, for various reasons, as you play the game. 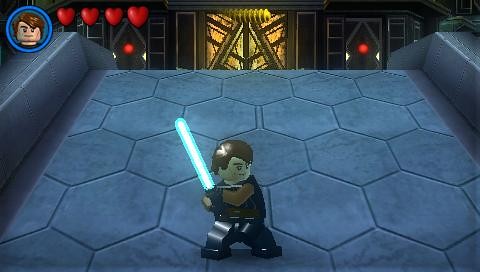 Visually, the game looks normal for a PSP game.  There are quite a few jagged edges around the character models and the animations, like the blasters and swinging your light saber.  This is more noticeable on characters with lighter colors, like the Clone Troopers.  Darker characters do still have the jagged edges, but they’re a lot harder to spot, unless they’re characters like Count Dooku and are in the middle of swinging a saber around.  The environments, however, look much more polished and smooth.  Nothing near the level of the PS Vita LEGO game, but good, nonetheless.

The game plays well, for the most part as well.  When you go to the Home Screen of the Vita while playing the game and go back, you will have a 2-3 seconds load time to resume playing.  This will happen whether you leave the game for 5 minutes or 5 seconds.  Apart from that the load times are all relatively short.  Loading up a new area of a level or a level it normally takes no more than 2-4 seconds.  The game was well optimized for running on the PSP.

Though there is one hiccup in running the game.  When you have little cutscenes that happen just before you gain control of your character, there is some slight slowdown in some parts.  This is just in the scenes, though.  For some reason, despite showing the same graphical engine as those scenes, the slowdown never happens in actual gameplay.  It is something worth noting, though.

As far as time is concerned, it will last you a good while.  Each of the 14 Story Level Sets will take about 25-30 minutes to complete.  So, if you only go through each level once, the game should last you at least 7 hours or so, and much longer if you want to do Free Play and unlock all of the extras.

Star Wars fans don’t have a lot of options on the PlayStation Vita.  Most of the Star Wars PSP and PS1 games are not available for the system, as of yet.  It’s missing some content and has some lag in scenes, but if you want some Star Wars action on your Vita, LEGO Star Wars III provided a fun, saber-swinging experience that fans of Star Wars and the Clone Wars TV Series will surely enjoy.  It doesn’t have everything the console version has but it’s a fun game, regardless.