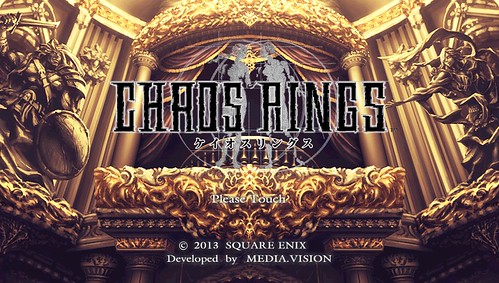 There was a time, many years ago, when handheld console-style RPGs were scarce.  That is, handheld console-style RPGs with 3D visuals and a style that companies like Square Enix are known for.  Let’s go back four years to 2010.  The PSP and Nintendo DS are going strong in the handheld market, and Mobile was just getting its gaming groove started.  Square Enix was developing for all three platforms, but they pulled something out of their development team that no one was expecting, Chaos Rings.

Chaos Rings was announced as a Mobile-only title that looked and played like a console-style RPG.  Not only that, but Chaos Rings featured what was said as a lengthy story, had full 3D visuals that were right on par with the PSP and DS, and it was offered as an exclusive, whereas Square Enix hadn’t made any brand-new RPGs for those other two consoles at that time.  Not to mention that the art designer of Final Fantasy VII, VIII, and X worked on the game.  This was a huge deal for the industry.  Many fans of the PSP and DS weren’t too happy about “phones” getting a brand-new turn-based RPG from Square Enix.  Yet it happened. 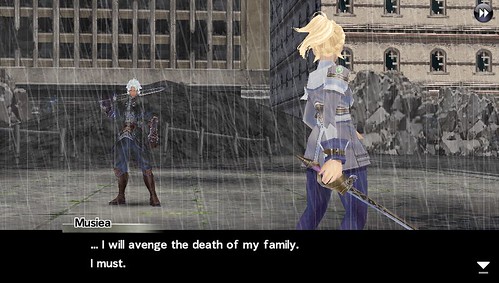 The plot of Chaos Rings revolves around four couples that are brought together in a place known as the Ark Arena.  With no memory of how they were brought there, they are all confused and wondering what’s going on, particularly a group that stands out, Escher and Musiea, whom seems intent on attacking and killing Escher for something he had done before they came to be in the arena.  The five couples are soon greeted by an enormous being known as The Agent, who informs them they’ve been brought to the Arena to travel to various worlds, collect Rings, and fight to the death.

With a Grim Reaper-like minion at his side, The Agent shows the groups of fighters that they have no choice but to take part in this tournament, and that the winning couple would be granted immortality as a reward.  The couples then set out to take part in this forced tournament, with tension between them and their own partner, with the other couples, and with The Agent, concerned for why they had been brought to this place.

The story of Chaos Rings starts out a little slow and doesn’t initially feel up to snuff with Square Enix’s standards.  However, once you play through a single scenario, you start to see the bigger picture of what’s going on, and things really start to be uncovered once you finish a certain couple’s scenario.  Then, you see the big picture of a threat and a way to bring that threat to an end.

The story is divided into scenarios.  You have a scenario for each of the four main couples, and perspectives.  Finishing a single storyline unlocks New Game +, which can be used to access another chapter of the story, which will lead up to a point until you’ve done this with all couples.  Only then will the true final chapter begin where you can confront the Final Boss of the game. 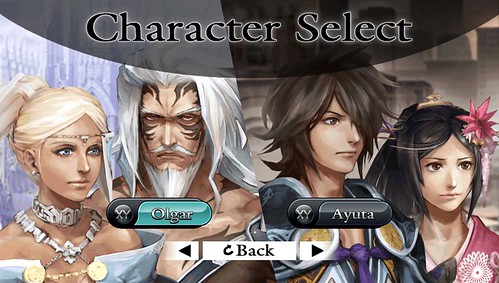 Chaos Rings is a turn-based RPG and plays out much like you would expect it to.  Although there is no huge World Map to explore, like there is in games like Final Fantasy VII, you will have several areas or dungeons to explore as you play through the game as well as fighting enemies using a turn-based combat system the incorporates a Player Party and an Enemy Party.  This is set up very similar to the likes of Final Fantasy III.

At the beginning of the game, you will only have access to one dungeon.  Progressing through the dungeon with story scenes and taking down bosses will unlock new dungeons as well as new versions of those dungeons.  Dungeons comes in Level varieties.  For example, at the start of the game, you may enter the first dungeon either in its Level 1-10 form or its Level 11-20 form.  This determines how strong the normal encounters are in these dungeons, as well as the treasure chests you find.  While each dungeon’s two boss fights aren’t affected by these, it is important to know about how these Level Versions work.

Bosses have preset levels and stats, so you will need to be strong enough to take them down.  Don’t think you can just power-level up to 15 or 20 and then stroll through the game by going into Level 1-10 areas for all dungeons.  The bosses will make you wish you hadn’t.  On the plus side, though, you can use that to your advantage.  If you’re Level 20 and head into a dungeon’s Level 41-50 version, you can go to some treasure chests and snatch some powerful equipment to use.

As you explore the dungeons, you will be going from room to room, fighting battles and solving puzzles to obtain key Items.  Battles play out in a normal Turn-Based fashion.  It comes in with your party versus the enemy party.  There is a change for you to go in and get the First Strike, or the enemy team can.  But you will be able to select commands to use for your characters to attack, defend, run, or support each other with.

Working together as a team is a theme heavily in the story of Chaos Rings, but also the gameplay.  You have two options of attacking in this game, Solo or Pair.  When you choose Solo, you can choose a command for that character to do.  If you choose Pair, you can pick a command that both characters will do at once.  As such, they both take damage from enemies when you do this.  However, Pair Attack can be much stronger than two separate Solo Attacks and it’s important to utilize this as you fight your battles.

Genes are also a heavily-impacted part of battle.  You obtain Genes from enemies as you fight them.  Crocodile-type enemies give you Crocodile Genes.  Celestial enemies give you Celestial Genes.  The list goes on.  This gives you elemental attacks, attacks that can heal your party, attacks that can raise your party’s stats, or automatic abilities that you can use in and out of battle, from raising your attack power to being able to completely turn off random encounters.  You will also allow these Genes to expand and learn new abilities as you fight more enemies of that type. 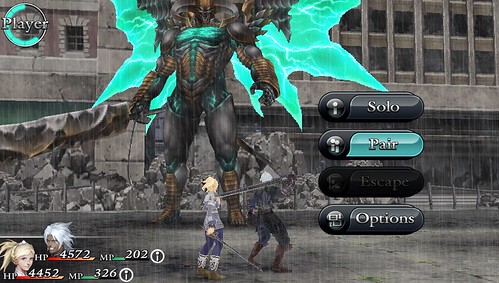 Outside of battle, you have puzzles that are required to finish to get Key Items that unlock the Boss Rooms of the dungeons.  Puzzles have different variations and are very brain—racking.  From sliding blocks away to create a path to the exit to ensuring that every candle in a room is lit, the game will test your brain on these puzzles.  While it sounds easy, and some are very easy, some of the puzzles really make your head spin.  This is a unique part of the game that dives from the RPG concepts and gives you a puzzle-type gameplay to do.

The game will not seem to last long, until you realize everything you have to do to completely beat the story.  Each story scenario for a pair of characters, counting time for grinding levels, will amount to about 5-6 hours, counting the New Game + chapter that leads up to the Final Battle.  Given that there are four scenarios and a Final Battle to take part in, the game should last you about 20-25 hours just to beat the story, let alone fighting the unlockable boss and maxing out everyone’s levels, stats, and genes.

Controls go two ways in this game, as do most PlayStation Mobile titles.  You can either use touch controls or button controls.  Touch controls play out the game like the game plays on Mobile platforms, like iOS and Android.  They are pretty simple and there are tap-able icons and buttons on the screen to access various things, like the Menu, Saving, and interacting with people and objects.

To move your character around, you can either use the D-Pad, Left Analog Stick, or by sliding your finger on the touch screen in the direction you want to go.  Interacting with objects as well as selecting options in the various menus is done with the Circle Button and the X Button is used for cancelling out of an option.  The Triangle Button opens up the menu, and that’s about all you’ll ever use.  The L and R buttons aren’t used for anything in this game, nor is the Rear Touch Panel. 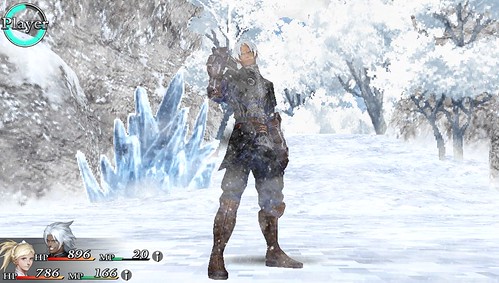 This is the part of the review that will make or break your purchase.  I will not lie to you.  Chaos Rings doesn’t play and run the same on the PlayStation Vita as it does on iOS, Android, and Windows Phone.  In fact, it plays much different, and that isn’t necessarily a good thing.

First of all, Load Times.  When you first boot up Chaos Rings, it will take you about 30 seconds to get to the Menu Screen where you can start up a new scenario or load a saved game.  This is a bit longer than the normal 15-20 seconds of most PlayStation Mobile titles.  As far as new areas and whatnot go, it depends on how long the game’s been open.  When you first boot the game up, you will encounter some pretty long load times, and they will only last so long.

The first time you load the game on a session, going from area to area will take about 6-8 seconds to load, as will going from the field to a battle.  After you’ve been through about 2-3 battles, this will shorten greatly, as if the game needs time to cope with being open for awhile.  On top of that, the first two battles you encounter will encounter some pretty extreme slowdown and lag with animations for attacks.  While it does get better, the game has some considerable slowdown going on as well as the game freezing for 1-2 seconds each time a random encounter boots up.

Needless to say, this game has a lot of technical issues.  While this is nowhere near game-breaking, it’s a very annoying factor.  If you don’t play anything else, you can easily get used to it, but if you go from playing something that runs smooth, like LEGO: The Hobbit or Final Fantasy X HD Remaster, it will be extremely noticeable.  If you can be patient enough to get used to it, then that’s great.  If not, then you may want to watch some videos online.

All in all, Chaos Rings is on PlayStation Mobile for play on the PS Vita, just as it was on other Mobile platforms.  While the game is riddled with some very annoying technical issues, the core game is there and is fun once you get used to how the game plays.  If you’re itching for turn-based combat and are a patient person, Chaos Rings is worth a go.  Once you get into the system, the battles are a lot of fun.  If you’re not one for patience or cannot deal with slowdown and lag for the first few battles, then it would be advised that you don’t buy this without looking at some videos first.