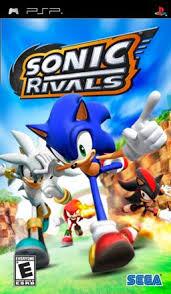 There are a lot of iconic franchises that go way back to the retro NES and Sega Genesis era of gaming.  A lot of franchises began in this era, resulting in huge popularity and games into this generation as well.  To name a few, I could say Final Fantasy, Metal Gear, Super Mario Bros, The Legend of Zelda, Phantasy Star, Castlevania.  There are so many different franchises that have helped to shape gaming over the years, whether they shaped it from the beginning or something big came along later.

Among these franchises are franchises like Super Mario Bros that has constantly tried new genres with their games.  Along with Mario is the blue hedgehog known as Sonic.  Sonic was huge ever since Sonic the Hedgehog released on the Sega Genesis.  Even that game is available on many platforms, including iOS and the Vita (through Sega Genesis Collection).  But Sonic has also done a lot of experimentation with different genres, from platforming to RPGs to racing.

Sonic has gone into the racing genre pretty deep in this gen with Sonic All-Stars Racing.  However, that is not the first handheld Sonic game that included racing gameplay.  The PlayStation Portable had two racing games in the Sonic franchise.  Whether Sega was testing waters or not, these two games had a unique style of gameplay that both appeased casual racing fans as well as classic Sonic fans.  It just so happens that it’s playable on the PS Vita.  Here is our official review of the PlayStation Portable game, Sonic Rivals. 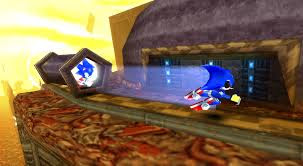 The story of Sonic Rivals takes place sometime after the Nintendo DS game, Sonic Rush Adventure.  It starts on a mysterious place known as Onyx Island.  After Amy, Tails, Rogue, and the Master Emerald are transformed into cards by Dr. Eggman, Sonic, Knuckles, Silver, and Shadow appear on the scene and are hunting after the doctor, but for different reasons.  Sonic wants Tails back.  Shadow was called there by an unknown communication, Knuckles is for the Master Emerald, and Silver is there for unknown reasons.

The game is set up into five different story scenarios.  While they are all part of the same tale, and they all come together at the end, they are all also very different.  Each section of the story involves two characters, so there are different scenes, depending on how the game plays out, even between the same characters.  There is also one scenario, the fifth, that isn’t available from the get-go and can only be played once you complete the other scenarios.

The plot that is shown here isn’t one that is incredibly deep, but it does add some interesting things to the mythos, particularly having the cast meeting Silver for the first time, and explaining his involvement both in the plot of Rivals, but in the series as a whole.  Though, knowing this, there is a good amount of prior knowledge needed, especially with the backgrounds of Knuckles and Shadow.  If you’re new to Sonic, a lot of stuff will be mentioned here that you won’t know about, like the Master Emerald. 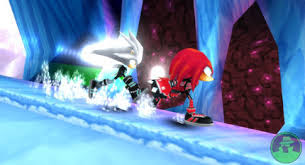 Sonic Rivals is a Racing Combat game.  Now, you could think of this like Mario Kart or Modnation Racers, though it’s not as complex as those games.  It has a very simple style of racing that is much more in tune for casual play.  You won’t be going through some huge, complex 3D racing track, but you will be doing something that Sonic fans will be more familiar with.  Each of the tracks plays out very similar to how a stage plays out in the old, classic, side-scroller Sonic games, with that combat racing twist to it.

When you first go into a stage, you will be racing through the stage with one other character.  What character it is depends on who you are playing as, and what part of their storyline you’re in.  Each of the five playable characters has their own story arc, and four of the five can be accessed from the beginning of the game.  So, if you want to dive through the game as Shadow or Silver before Sonic or Knuckles, you can do that.  But you cannot get the fifth character until all four others are cleared.

The races are set in the form of three-stage Zones.  This is straight from the classic Sonic formula.  Two of these stages will be races against the character currently racing against your character, and the last will be a Boss Fight, where you will be racing to defeat the boss and get more points than your opponent by the time the boss is defeated.  Example, if the boss is defeated in 6 total hits, and you get 2 hits and your opponent got 4 hits, then you will lost that stage and have to do it over again.

When you are traveling through each stage, your goal will be to stay ahead of your opponent by use of your jumping, attacking both your opponent and enemies, collecting and using rings and powerups, and learning which paths go where.  There are several different areas even in a single stages, where you have a few different paths to go on, and you’re not required to both go on the same path.  Learning which is faster could be the key between winning and losing. 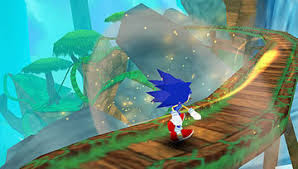 The casual aspect of this game is that if you get hit and stutter, you can still easily catch up to the other character and win.  This is a balanced racing game where you can be overtaken easily if you don’t know what you’re doing and no matter how big of a setback, there is always a high chance you can easily catch up to your opponent, especially with powerups being gained as you travel through the stages.

Powerups come in a few varieties.  There are two main types of powerups, elemental and special.  Elemental powerups come in Fire, Ice, Gravity, and other elements and these have both offensive and defensive capabilities.  What the powerup does depends on whether your ahead of or behind your opponent.  If you’re in front of your opponent, the Defensive powerup will activate when you use it.  When you’re behind them, the Offensive powerup will activate.  For example, the Fire elemental’s Offensive attack is a fireball that homes in on your opponent, and the Defensive is a Flame Shield around you that will deflect a single attack or damage an enemy that touches you.

Special Powerups are labeled with a Star, and these are character-specific moves.  Every one of the four main playable characters has their own, unique, powerup that they can use when they obtain this item within a stage.  For example, Sonic can travel at supersonic speeds for a short time, Knuckles can instantly stun his enemy, and Shadow can slow down time for his opponent.  Special Powerups are, by far, the more useful of the powerups, despite there being several types of elemental powerups to collect.

Finishing each stage with a victory is the key to getting to the next stage, and fulfilling certain condition, such as finishing a stage in a certain amount of time, finishing a certain number of stages, or by going into Challenge Mode, rather than Story Mode, will net you Cards for a Card Collection, as well as customizable costumes for your characters.  Costumes can be used during the game, but Cards can only be viewed from the Main Menu.  Cards are basically a collection of artwork, showing how the art of Sonic has changed over the years.

There are six zones in total, each with two races and a boss fight.  This leads up to a total of 18 stages.  Each stage takes roughly 2-4 minutes to complete, so finishing Story Mode with a single character should take a little more than an hour.  Assuming you want to unlock the fifth character and see all of the story scenarios, the game should take you about 6-7 hours to finish, along with some extra time if you can do Ad Hoc multiplayer with friends or you continue to play and do Challenge Modes and Challenge Tournaments to unlock the Card Collection.  It’s not a really long game, but it doesn’t need to be.

Most PSP games don’t use all that many controls.  It is no surprise that none of them, by default, use every button and feature on the Vita, as the PSP didn’t have a bunch of features the Vita does, like the touch screen, rear touch panel, Dual Cameras, Right Analog Stick, etc.  Sonic Rivals uses even less, as it doesn’t even use as many buttons that the PSP had, which isn’t a bad thing.  It makes things very simple.

Moving your character throughout the screen will be done either with the Left Analog Stick or the D-Pad, though I found myself using the D-Pad more than anything else.  This is done to navigate, but also to press down and charge your initial run to gain some speed on your opponent.  Apart from this, you will use the Face Buttons for more actions within stages and the Start Button to pause the game.

The X Button is used for jumping, and pressing it twice will do a homing attack while you’re in mid-air.  The Circle button is used to punch your opponent is they are directly in front of you, and Triangle to use a powerup you have collected.  The Square Button isn’t used for anything, and neither are the L and R Buttons.  As I said a moment ago, this is a very simple control scheme. 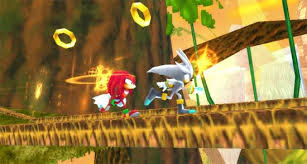 Visually, this was a pretty pleasing PSP game.  As with all PSP games with 3D character models and environments, Sonic Rivals has jagged edges around the character models, which are a little more present when stretched out on the PS Vita’s screen.  While this is noticeable, the rest of the game is very polished.  There is the occasional jagged edge, but the environments and powerup effects are really smooth and look nice.  This is a very colorful and smooth PSP game and looks pretty nice, especially considering when it was released.

As far as how the game plays, things do quite well on the Vita.  While the initial cycling of load times is a fair amount, loading each stage, scene, and menu is really fast.  The most I’d say you would have to wait is about 5-8 seconds, which is cake compared to some other PSP games.  The game runs really well on the Vita and everything flows very smooth.

Sonic Rivals definitely isn’t the most in-depth or lengthy Sonic game on the market.  There are RPGs and more now in the genre, but this game does a nice job at combining classic Sonic gameplay with the combat-racing feel of games like Mario Kart and ModNation Racers.  If you want an in-depth Sonic racing game, this isn’t for you, but if you want a fun casual-feeling Sonic game, it’s a fun way to pass the time.