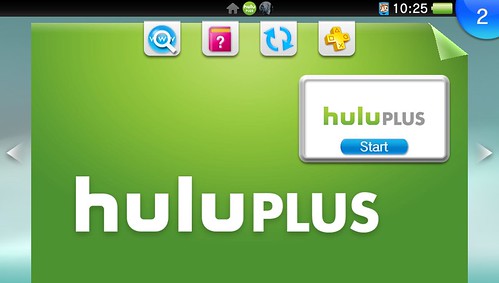 The library of apps available on the PlayStation Vita is slowly growing.  Not even a few months ago, apps in the form of streaming services really kicked off.  While the Vita had access to the Netflix service more than year before then, developers finally brought many of the other services to the system.  This included a lot of major hitters, most notably Hulu Plus, Crackle, Crunchy Roll, and Redbox Instant.  This brought the Vita up to the same speed as the PlayStation 3, as far as these services go.

Last week, we brought you our official coverage of the Netflix app, which overall was a pretty good app.  While this has been out for awhile, we definitely need to check out the other services.  Every service has its own fanbase.  The hardcore anime fans go to Crunchy Roll.  Movie-goers head straight to Netfllix and Redbox Instant.  Where do people go when they want to watch TV Shows?  Those people go straight to Hulu Plus.

Hulu Plus is the streaming service, bringing new TV to all who want to fight them.  With the same cost as Netflix, it is a highly-watched service.  So, how does the service stack up on the PS Vita?  Let’s find out.  Here is our official review of the Hulu Plus app. 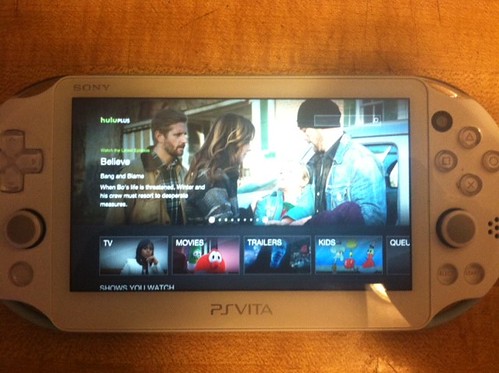 The functionality of a streaming app was covered pretty well in our review of the Netflix app.  To put it simply, we use these services to browse through media we want to watch on our device.  It’s a bit similar to YouTube, but users cannot upload what they want to it.  We, as users, are restricted to watching what is put there.  Hulu Plus is added to by the official publishers and developers of modern day Television shows, and that is primarily what is available on the service.

When you boot up the app, you’ll be asked to create a profile, or to log into an existing profile.  Like Netflix, Hulu Plus charges $8 a month for their services, and give you a one week free trial for the service, so you can try it out.  The cost for this service is justified through the wide selection of shows and movies that you can watch.  From Marvel’s Agents of SHIELD, Believe, Sleepy Hollow, Blacklist, and more, there is a lot to watch on here.  It’s almost like a digital version of Cable.  It also has commercials/ads that

After you boot up the app and sign in, you’ll be able to search for and browse through a ton of TV content that you can stream at your leisure.  While services like Netflix also have TV shows to watch, Hulu Plus is unique in how recent their content is.  Netflix’s library is mostly comprised of content that is a year old or more.  Hulu Plus is not.  Their stuff is pretty much all recent.  Let’s say you have been keeping up with the Marvel Cinematic Universe and missed the new episode that aired on ABC?  No problem.  Just boot up Hulu Plus and it is right there.  New episodes of shows that are on Hulu Plus are updated within 1-2 days after they first air on television.

Aside from watching shows, there are a few features that the app lets you take part in.  When you first pull up a show’s page, you can browse through episodes, which is mostly set apart, showing the most recent entry.  But there are also clips and trailers to watch, and you can add the show to your Favorites, so you can access it at any time after first booting it up.  There is also a You May Also Like section, showing similar shows, though these are also compiled and shown on the Home screen of the app after you watch something.  An example of this is to show Arrow if you watch Marvel’s Agents of SHIELD.

You can also access your settings to enable Captions, Autoplay, Caption Formatting, or log out of your account.  Apart from these, it pretty much sums up what the app can do.  Like the Netflix app, you can only use one account at a time. 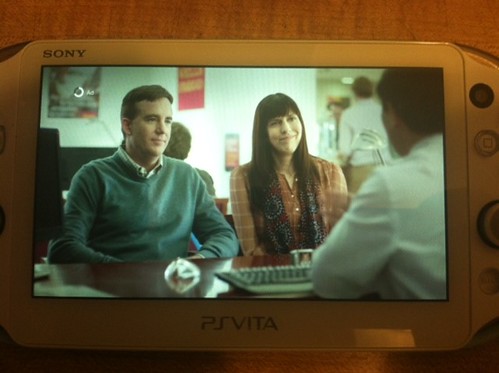 The interface of the Hulu Plus app is very similar to how the app looks on the PlayStation 3, much like the Netflix app was.  In fact, the developers may have built the Vita’s app from the PS3 app.  Regardless, it looks similar, so if you use the service on a PlayStation 3, you’ll be at home with how the app looks.  You’ll be loaded to a screen showing the search bar at the top-right corner of the screen and large previews of the features shows and movies.

Once you’re inside a show, there aren’t a whole lot of options needed, but with a simple tap of the X Button, you can pause what you’re watching and press the Up button the D-Pad to obtain some options.  The options available are to stop playing the show and return to the menu, turning captions on and off, and turning autoplay on and off.

The design works just like it does on the PS3, which is a plus for those that have both a PS3 and a Vita.  You will feel right at home when using the app.

You may have noticed that the screenshots shown in this review look like they were made from a camera, and they were.  Hulu Plus doesn’t allow screenshots to be taken of the app, which made things very tricky for me, when trying to post this review.  I don’t like having off-screen photos for an app review, but with no official images out on the net for the Vita app, this is the best we could do.

Let’s start by talking about load times.  When you first boot up Hulu Plus, whether you have an account set up or not, it will take roughly 40 seconds to load up to an interface where you can do something.  That is almost twice as long as it takes to boot up the app on the PS3, which takes about 22 seconds.  Second, when it does boot up, not everything is there.  It takes about 10-15 seconds longer to load image previews as well as the search option.  In other words, it will take a full minutes to boot it up, completely.

Second is navigating the interface.  When you navigate with the buttons (No touch controls), there is a bit of lag on the Vita’s app.  When you try to go down, you’ll have about a one-second lag before it actually moves to that next area.  This is the same with any button interface in the app, whether you’re trying to pause a show, move to a new episode, or turn an option on or off.  I will say that it runs the shows nice once they’re loaded, but that’s the only thing that runs smooth in this app.

One thing that is nice, though, and works well, is the Autoplay feature.  This is a feature that automatically plays the next episode of a show you’re watching when one ends, or starts a different show based on your interests.  This is something that was not included in the Vita’s Netflix app and is a very nice option to have available.  It also does well at resuming a show you’re watching if you go out of the app mid-show to do something and go back to the app later on.

If you want Hulu Plus on the Vita, here it is.  It looks just like the PS3 version of the app and runs TV Shows quite well.  However, you should be warned that it suffers from a lot of technical problems with its interface.  If you can put up with a 60 second startup time and lag when cycling through menus, it’s not a bad way to view recent shows, though I wouldn’t recommend it as a great app.  Hulu has a lot of work to do on this app before it becomes one of the Vita’s big hitters.

The PlayStation Review Network Rates Hulu Plus a 5/10.

483 thoughts on “Hulu Plus Review”