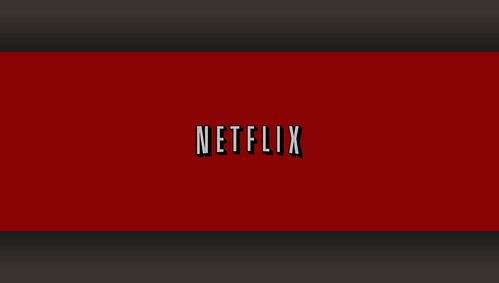 The PlayStation Vita’s list of apps is slowly growing.  Alongside, the equally-growing list of apps available through PlayStation Mobile, the Vita has access to default apps like Mail and Calendar, to many other apps via the PlayStation Store, like Flickr, Facebook, LiveTweet, Hulu Plus, and more.  The app library is slowly growing, and there are a lot of popular services now available on the system.  From social media to media streaming services, there is a lot of non-gaming ways to enjoy a PlayStation Vita.

One area of applications that we have no gone in-depth to review yet is a notable one: media streaming.  There are many different services around that allow you to stream music and movies.  If you recall, we had made a review for the Crunchy Roll, an anime-specific streaming service, which did pretty well on the Vita.  However, there are many others out there, and many are much more popular.  Red Box Instant.  Hulu Plus.  Netflix.

If we had to choose one that had to be the most popular and had the most content, Netflix would be our choice.  Netflix doesn’t have incredibly recent material (though it does have movies as recent as Insidious: Chapter 2), but it has an immense amount of content you can enjoy.  So, how does Netflix stack up on the PS Vita?  Here is our official review of the Netflix app for the PlayStation Vita. 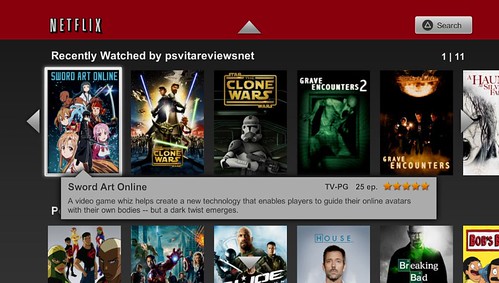 So, how does Netflix run on the PS Vita?  What is there to do?  Well, first of all, all you really need to worry about is watching movies and TV shows.  When you first boot up the app and set up your username or log in with your account, you will have access to so many movies and shows, you won’t know what to do with it all.  Netflix allows you to watch anything from Marvel’s The Avengers to Star Wars: The Clone Wars to Sword Art Online to Insidious.  There is a lot to work with here, and will take you ages to watch everything.

Once you get logged in or signed up, you will be able to browse through the library of different shows and movies to choose from.  There is a multitude of genres through each, from Horror to Science Fiction to Drama to Anime.  There is something for everyone here.  Once you choose something, you will be able to go in and start playing the episode or movie, as well as adding something to your “Instant Queue”, which lets you access what you want to watch in the near future.  You can also press the Triangle button to search for whatever you want.

After a small loading time, your streaming will begin.  Unlike Hulu Plus, Netflix offers no advertisements in the middle of your movies and shows, so all of your watching can be uninterrupted.  That is definitely one of the nice parts of Netflix.  As you are watching something, you also have the ability to scroll through, in case you want to watch a specific part of an episode or movie.  This is set in sections that looks like frames, where you cycle through with the D-Pad until you get to the area you want.

When something ends, you can select something else to watch.  It’s a pretty straightforward app. 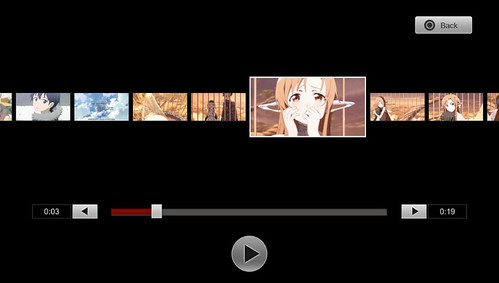 Something that is important is for an app’s interface to be simple and user-friendly.  It’s also important for the interface to be the same across all platforms.  This writer has used Netflix on the iPhone, Windows 8, and PlayStation 3, so with that, there are some expectations to be met by an app for the PS Vita.  The app needs to look similar to the same app on other devices, and Netflix does a nice job at that.  The PS Vita version of the app looks very similar to what it looks like on the PS3.

When your first load the app, you will see a red Nextflix banner across the top of the screen, with a small box on the right to show you that you can press Triangle to go into a search.  On the rest of the screen, it will list everything you have to choose from, divided into rows.  The rows are categorized, with the top two being your Instant Queue and your Recently Watched titles.  Below that will be Popular Titles, What’s New, and then into other genres that you can cycle through.  It’s interesting to cycle through these, rather than just searching for something specific.

When you open up something you want, you will have a few options available to you.  You can choose an episode to play or add it to your Instant Queue.  When watching TV Shows, it stays at the most current episode you’ve watched.  So, if you have been watching Netflix on your PS3 and then switch to your Vita, so someone else can use the TV, it will automatically update and you can start right where you left off, even within a couple minutes after closing it on the PS3.

You can pause a stream when you’re in the middle of it with the X button.  This will bring you to a screen where you can cycle through framed sections of what you’re watching if you want to go back and re-watch a scene or go forward to an area later on in the movie or episode.  You can cycle through these, like everything else, either with the D-Pad or touchscreen. 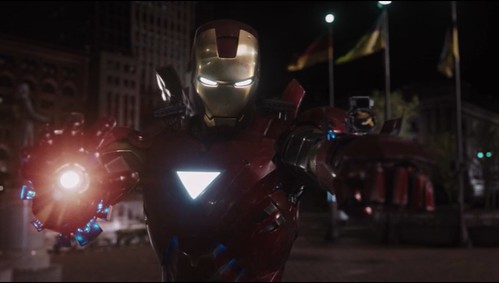 How an app performs is the most important aspect of it.  It can look as pretty as can be, but can still be terrible if it doesn’t perform well.  Netflix is a mixed bag here.  Does it run great?  No.  Does it run terrible?  No.  It’s somewhere in between, for various reasons, when comparing to how it runs on other platforms, like the PlayStation 3, iOS, and Windows 8.

First of all, this app doesn’t run in the background.  The system registered it as a game, and uses enough processing power that it cannot run at the same time as a game.  If you try to use Netflix while playing a game, you will be forced to close the game you’re playing in order to run it, and vice-versa if you’re running Netflix and want to play a game.  On the bright side, though, if you go back to the Live Area from the app and do something for awhile, you will experience no lag in video playback when you go back in.

Next, the loading time.  When you first boot up the app and are already connected to the Internet, you will waiting about 35-40 seconds before you can look at the menu and choose something to watch.  That is 40 seconds before you can do anything in the app at all.  While this sounds pretty bad, it’s not.  When you boot up the app on a PS3, you will get an initial loading time that is about the same.  The PS3 app normally takes about 35 seconds to boot up once you boot up the system.

Apart from this, the Load Times are pretty similar across all platforms.  Once you select something the first time in a session, it will give you a loading time of about 5 seconds before it will start playing.  This is something about the same across all platforms, though I felt the PS3 and Windows 8 versions took a little longer to do this than the PS Vita version did.  After it’s loaded, though, everything takes all but a second to pause something and go back in.

Navigating menus, however, is a different story.  While navigating your stream is a very quick, flowing process, navigating menus has a bit of lag in it.  When you move through menus, with the buttons or with touch, there will be a small moment of lag before it moves.  Normally, this wouldn’t be that noticeable, but it is when the apps on the PS3 and Windows 8 run much smoother.  When you’re cycling through the library on those other apps, there is a very smooth animation.  This is more like a laggy jerk when you watch it closely.

If you want to watch Netflix on the PS Vita, then you are in luck as the Netflix app definitely works for what you will want.  There is some menu lag that is not present in other versions and has the same long load times as the PS3 version, but once you get streaming, it works very well and is a great way to watch your shows.  A little patience, and this is a very good app for the Vita.

The PlayStation Via Review Network rates Netflix an 8/10.