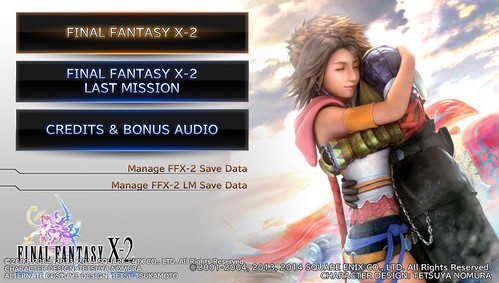 That is also a reason why we needed to review the games separately.  If you review a collection together, it may not give the viewer an accurate depiction of the game’s worth.  Throw an outstanding game with a horrible game and the outstanding game could easily outweigh and move the score to a higher score than you would give if it were just the other game.  It is true here.  Final Fantasy X-2 will not get the same score that Final Fantasy X achieved.  As for why, here is our official review for Final Fantasy X-2 HD Remaster. 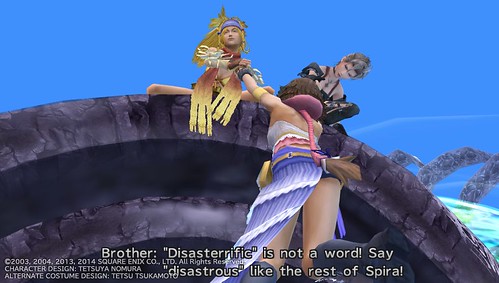 I’ll do my best to explain this section without giving any spoilers for the ending of Final Fantasy X, though that will be no easy task.

As Yuna’s personal mission plays out, the Gullwings travel across Spira, helping those in need and hunting for rare spheres, with Leblanc, leader of the Syndicate Sphere Hunters, not far behind, as well as the new Youth League and New Yevon groups that are leading Spira into the future.  Before long, they find spheres that show a much deeper and sinister plot, threatening all of Spira and Yuna must take up arms to defend her homeland.

The story of Final Fantasy X-2 is good, but it’s also not-so-good.  Tidus’ character from Final Fantasy X was hit-and-miss with fans, and X-2’s story is even moreso.  There is much more freedom throughout this game and Yuna and Rikku are trying to make a new life for themselves, outside of what they left behind in Final Fantasy X.  This change is resulting in a huge change of character, especially in Rikku.

The main disappointment in the story is that the character for both Yuna and Rikku (though Yuna seems to be more of herself towards the end) seem like they’ve changed so much that they are completely different people, not associated with how they were in the previous game.  The plot has a completely different feel than Final Fantasy X and the antics of both Brother and Rikku will likely give you many “Are you serious?” thoughts, particularly their genius idea for bringing together the people of Spira.  It’s not bad, but it’s nowhere near what you would expect, given what we know from Final Fantasy X. 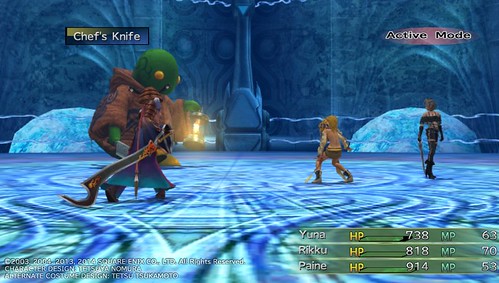 For the most part, Final Fantasy X-2 plays in a similar manner that Final Fantasy X does.  You can still explore the world map, and locations around Spira.  You’re still running through dungeons and fighting monsters in turn-based battles.  However, there are some things that play out different, particularly the battle system and how you progress from area to area.

First of all, pretty much the entire world map is available to you from the beginning of the game.  You are aboard the airship Celsius for the majority of the game, so if you want to go to Zanarkand or the Calm Lands or Bevelle, all you have to do is select the destination (in the same manner you could do from the airship in Final Fantasy X) and you will appear near a Save Point there and can explore.  This will also be familiar as almost every area looks just like it did in Final Fantasy X, though there are some new areas to explore in places like Zanarkand.

The fact that all of this is available from the get-go leads into how the game progresses.  As the story progresses, places will become “Hotspots”, where you can progress the story.  The entire game is set into 5 Chapters, and getting to certain points of the story or certain boss fights will end a chapter, and you can do different things in each chapter.  Certain monsters are in areas in some chapters and not others, and some quests or missions can only be done during certain chapters.

What you can do in the game is really extensive.  Each chapter has its own set of quests and side-quests for you to do, and they pile up more and more the further into the story.  Imagine it like the amount of extra content that opens up when you finally get the airship in Final Fantasy X, except throughout the entire game.  There are things like Chocobo Catching, Gunner’s Gauntlet , Communication Spheres, Desert Excavating, Public Relations, Marriage Campaign, Calm Land Activities, Blitzball, Sphere Break, and much more.  The amount of extra content in Final Fantasy X-2 is really impressive and a lot of it can be missed.

You will want to do all of this as well.  Final Fantasy X-2 has different endings you can achieve and the best ending is for getting 100% Story Completion, which is the one you want.  To do this, though, you have to do literally everything that involves other characters.  You also need a guide because as much as a simple few seconds skipped from a cutscene could keep you at 99.8% at the end of the game and require you to go through the game again to get that last bit for the good ending.

The battle system is also very much different from Final Fantasy X.  It is similar, but different.  First of all, the system feels more action-based.  The Active Time Battle gauges fill up much faster and are no longer waiting for you to input all of your commands before an enemy will attack.  An enemy will attack as soon as they are ready, whether you are or not, and the timing of attacks is very critical as initiating an escape or attack at a certain time could let you hit an enemy before they have a chance to finish their attack animation, and the same goes for getting hit.  This is a big disruption for spells as you will stagger and need to take a couple seconds to resume casting.  Timing is everything.

A notable thing is that Final Fantasy X-2 has a traditional Level Up system.  You gain Experience from battle and level up, rather than using the Sphere Grid from the previous game.  You also gain AP for defeating enemies or using abilities, which help you learn new abilities. 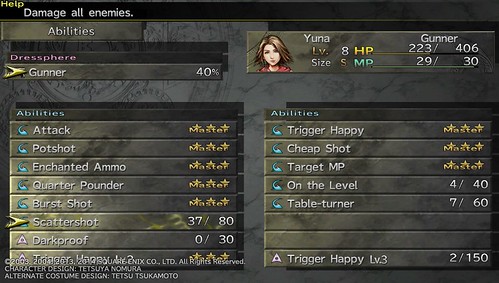 Abilities and Skills are set in stone with Dress Spheres and Garment Grids.  Final Fantasy X-2 has a class-based system, similar to Final Fantasy V’s Job System.  However, this is through Dress Spheres.  A Dress Sphere is essentially a magical costume you equip and, which that costume, are the memories and abilities of a class.  This is a normal set of classes, like Black Mage, White Mage, Dark Knight, Warrior, Berserker, as well as unique classes like Psychic and Gun Mage.  Equipping a Dress Sphere will enable you to use that job’s abilities.  You can also switch to a different Dress Sphere in the middle of battle.

Garment Grids also add depth to this.  As you play the game, you will get Garment Grids that you can attach Dress Spheres to, which are how a character can access the Dress Spheres.  Each Garment Grid has different aspects to it.  Some have different grids and can have a different number of Dress Spheres within them.  They also have automatic abilities and gateway abilities.  Auto Abilities are effects always there, like stat increases, and Gateway Abilities activate when you move through the grid when switching Dress Spheres in the middle of battle.

When you finish the game, there is a New Game Plus feature as well.  This will take all of your progress, except for your character levels into a new game.  This includes Story Progress, Abilities, Dress Spheres, Garment Grids, and all items that aren’t Story Items.

Along with all of the side content present in Final Fantasy X-2, the HD Remaster is based off of Final Fantasy X-2 International, so there is much more content added to the already-large game.  First of all is the Creature Creator.  This lets you capture creatures throughout Spira and recruit them to your own team.  This can be as simple as a Chocobo or as large as the fearsome Azi Dahaka from the Farplane.  They can learn new abilities as they grow, but cannot be controlled in battle.  They are AI.

Another aspect of Creature Creator is the Fiend Arena.  This lets you take part in tournaments and fixed battles against fiends.  You will unlock tournaments as you progress until you can gain tournaments that are much tougher than the Final Boss, and you can even find and recruit old friends from this place.  This is an ideal place to train for AP and Levels if you have problems throughout the game.
The final addition is called Final Fantasy X-2: Last Mission.  This is a grid-based dungeon-crawling game that takes place after the events of X-2 as the Gullwings travel through a newly discovered tower on Spira, aiming to get a prize, after they were all contacted and brought there.  All abilities and stats here are not connected to the main game, in any way.

The controls for Final Fantasy X-2 are very similar to those that are in place from Final Fantasy X.  As with its predecessor, the touch screen is not used for much.  There are two features.  One is where you can swipe the screen outside of battle to choose to automatically heal the party, either by spending MP on healing spells or by using items in your storage.  The other is for battle, which allows the animations for changing Dress Spheres being long or short.  This is similar to the animation control in Final Fantasy X for Aeon animations.

Other than that, the scheme is the same.  You can use the D-Pad or Left Analog Stick to move.  X is used for selecting an option in a menu or talking to a character, while Circle goes back or cancels a selection.  Triangle still opens the menu and the L and R buttons will allow a spell to switch between targeting one enemy or all enemies.  The Start Button pauses the game.

That is pretty much all there is to it for the control scheme.  It’s pretty simple and if you’ve already played Final Fantasy X, you’ll be right at home. 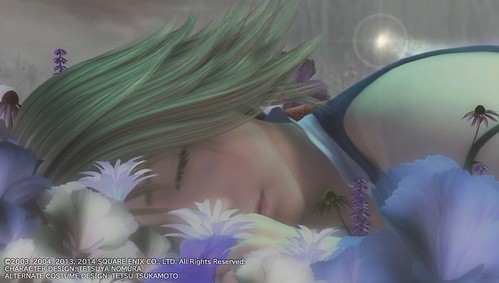 As far as the game’s visuals are concerned, they are superb.  When looking at the game’s character models, animations, and more, it just may look even better and more smooth and crisp than Final Fantasy X does, and that’s saying something.  There are no jagged edges to be found anywhere.  The developers did a really nice job when they made the PlayStation Vita version of this HD Remaster.

As far as how the game plays, it is similar to that of Final Fantasy X, with only slight differences.  The load times for going from area to area is a few seconds, although the load times when going into a Save Sphere to save the game has been increased a bit.  It’s not a huge difference, but it takes about one or two seconds longer to get to the area where you can save your game.

The game runs smooth, other than this.  There is a tad bit of slowdown when you are going into battles every once in awhile, but it’s not too noticeable.  Other than that, it runs well.

There is truly a breathtaking amount of things to do in Final Fantasy X-2.  It is possibly one of the Final Fantasy games with the most extra content to do.  While the story will make your head spin and question why the writers wrote this the way they did, and why characters are so different, there is a lot to do here and, tied with a fun battle system, Final Fantasy X-2 is a fun game, if you give it a chance.