The first thing you need to know about PlayStation Classics on the Vita is that you need to adjust the screen options to get it to go full-screen on the system.  By default, they are cropped in the middle of the screen.  You need to hold the PlayStation Button or hold the touch screen to find the Settings Menu.  From there, you can navigate the Other Settings and get to Screen Settings to set the game to Full Screen.

Let’s take a trip back to the 1990’s.  1997, specifically.  The PlayStation and Nintendo 64 are dominating the gaming industry, and the horror genre is, essentially, at it’s birth.  Games like F.E.A.R. and Dead Space are not around.  Survival Horror is all about survival, challenge, and puzzles.  The only big names in the genre are the chilling Silent Hill and the franchise that would become infamous.  Resident Evil.

Resident Evil is a name that many people recognize, but not everyone understands when I talk of the original.  The original Resident Evil had fixed camera angles, limited ammunition and Save Points, and was full of puzzles and challenge.  My first PlayStation Classics review is going to be for Resident Evil: Director’s Cut.

Resident Evil was Capcom’s first attempt at creating a horror game.  The plot is situated at a Mansion outside of a town called Raccoon City.  A series of murders recently took place in the mountains around the city, and S.T.A.R.S, which is a special forces police team, was sent to investigate.  After communication with the Bravo Team is lost, the Alpha Team is sent in to investigate both the murders and the whereabouts of the Bravo Team.  When they arrive, they are attacked by a pack of rabid dogs and become stranded in the nearby mansion.  Before long, they are all stranded from one another with questions and more deadly creatures waiting for them in trying to find a way to escape.

The story of Resident Evil was a big part of its selling point as the franchise grew.  The premise grew from the original and turned into a deep, interesting Sci-Fi scenario with Zombies, Mutants, and more.    You gain bits and pieces of the story as you progress the game, and everything comes together once you reach the ending.

Endings is another selling point for Resident Evil.  There are several endings you can acquire, depending on how you play the game, and only one is canon.

Resident Evil is the perfect game for the term “Survival Horror”, because it is exactly what you do in the game.  The game has you stuck in a Mansion that is filled with zombies and mutated animals, from dogs to spiders to snakes.  You have to rely on gathering supplies and making sure you have enough ammunition and room in your inventory for everything you need to survive and to solve puzzles to get to the next area.

The game starts you off at a character selection screen.  You can play the game either as Chris Redfield or Jill Valentine, and the game progresses differently, depending on who you pick.  Once you start, you’re in the entrance of the mansion, just after mutant dogs chase you and your team there.  From there, your objectives are to explore the mansion, find your missing team members, and find a way to escape. 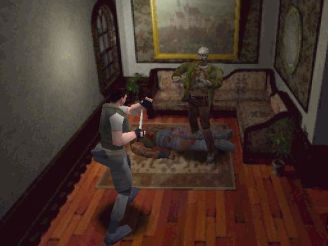 Exploration comes from running through each room and collecting items for their various uses.  There are weapons and ammunition scattered throughout the game, which are used to defend yourself against the enemies roaming the halls of the mansion.  There are also various herbs that you can gain for healing.

Herbs are used for a combination system, where you can combine herbs into new herbs.  You have Green herbs, Red Herbs, and Blue Herbs.  Each herb has a different use.  By itself, you can use a Green Herb on yourself to restore some Health, or a Blue Herb by itself to cure poison inflicted on you by various enemies.  Red Herbs don’t do anything by themselves, but when combined with a Green Herb, it more than doubles the effect.  So, a Green herb heals you a little, but a Green/Red Herb Combo heals you a lot.

Another type of item is called an Ink Ribbon.  Ink Ribbons are used to Save the game when you find a typewriter around the mansion.  Each Ink Ribbon bundle you find has 1-2 ribbons and one is used when you save.  That is another challenge.  You can only save your game so many times.  Use all your saves early in the game and you’re in trouble.  To be able to save, you have to find Ink Ribbons and then find a Type Writer.

Finding items and getting past enemies is challenging, but the bigger challenge is how many items you’re allowed to carry at one time.  You have a limit on how many items you’re allowed to carry.  Finding items is one thing.  Finding items when you can only carry 6-8 at one time is another.  This number included weapons, ammunition, herbs, and Key Items.  So, if you’ve got a handgun and handgun ammo, you just used two of your 6-8 slots.  The key is to know what goes where so you can grab a Key Item, take it to where it needs to go to get a new Key Items.

Item Boxes aid with this challenge.  Across the game are several Safe Rooms, which each house a Typewriter for saving the game and an Item Box.  This is where you can store your items.  All of the boxes are linked throughout the game, so the items you put in one box will be available to be taken from any other box you find in the game.  These are to be used strategically, so you don’t have to run all the way across the mansion for a specific item and then all the way back to deposit it for something else you need.

Combat is similar to how combat works in games like Resident Evil 4 and 5, but with a few differences.  You hold a button to aim, and then you can either aim straight, down, or up, and attack an enemy.  No enemy goes down in one shot, unless you’re using heavy-duty weapons, so a lot of strategy is required here, too, especially when you’ve got a lot of enemies around you.

The Director’s Cut version of the game, which is what is available on PSN, has a few enhancements from the original.  There are some different angles, as well as including a Beginner and Arrange difficulty settings.  Beginner is a setting where enemies take less damage to defeat, and Arrange is a challenging difficulty where all of the items are in different places across the mansion.

The game takes a lot of thinking to be able to finish very quickly, but once you get into the swing of how things work, it becomes a lot of fun to keep progressing to get more of the mystery unsolved.  The game should take you at least three or four hours to complete on your first fun, though it is possible to finish it in less than two hours.

Replayability comes into mind here, as that’s not a very long time to finish a game.  Replayability is there in the element of the endings and unlockables.  When you first beat the game, you gain a special key to access a locked room, where you can change into different costumes for gameplay and cutscenes alike.  If you can beat the game in a certain amount of time, though, you can unlock a Rocket Launcher with infinite ammunition.  This allows for fun speed runs, where you don’t need any weapons but the Rocket Launcher that can defeat any enemy, bosses included, in a single shot.

Lastly are the endings.  Chris has a few endings he can get, depending on how you play the game, as can Jill.  So, if you would like to see all possible endings for the game, you will need to play it through several times.

Resident Evil: Director’s Cut is not the most beautiful PlayStation game on the market.  Even in it’s time, it didn’t look beautiful.  While the backgrounds are flawless and pre-rendered, the character models look very blurred and blocky.  Sometimes, you can tell an arm is really a rectangle, and the faces are blurred with mouths that rarely move during speech.

Despite this, the enemies in the game are rendered pretty well.  They are far from flawless, like the backgrounds, but they do look better than the character models.

What really brings down the game is audio.  There is voice-acting in all of the cutscenes of Resident Evil, and that can be a good thing, but also be a very bad thing.  I don’t know if this was intentional or not, but the dialogue in the game sounds like a tongue-in-cheek TV show.  The dialogue is very serious for the setting, but the way the Voice-Actors talked sounds like a bad Japanese dub.  The dialogue will likely keep you laughing, if nothing else.

The music, however, sets the theme well.  There is soft, eerie music throughout, and the placement is well, overall.  There is silence that leads to ear-shattering, pounding music when the window behind you breaks and you have mutated dogs running after you, and fast-paced desperate music when you’re taking on the final boss of the game.  Most of the presentation was decent, but the music soared in creating a good, creepy atmosphere.

I will say this.  The controls of the original Resident Evil have not aged well.  Some people could say that the controls for the game are part of the difficulty as well, because they are very wonky and awkward.

Normally, when moving through a 3D game, you just use an Analog Stick to run.  Not in Resident Evil.  Moving in this game is done with the D-Pad, though I believe the D-Pad can be set to the Left Analog Stick with the PS Vita.  You press the Up button to walk forward, and hold Square to run.  If you need to move to the sides or turn around, though, it gets a little tricky.  If you just need to move a little to the left, you press the Left or Right buttons while you’re already moving.

Combat is not as awkward as this.  When you have a weapon equipped, you can press the R button to aim it.  You can set this to either aim directly in front of you, or you can set it to automatically lock onto the nearest enemy.  I always use the latter, as I find Manual Aim in this game to be a pretty big challenge.  As I said earlier, you can aim forward, up, or down.  So, if you have a shotgun and want to get a headshot on a zombie, you point your weapon up and wait for them to come close enough for you to hit them.

Back in its day, these controls worked well.  Now, however, they may feel more like part of the difficulty of the game.

Resident Evil is a classic horror game that all gamers should try at least once.  The voice-acting and controls have not aged well for today’s gaming community, but it is a fun experience, all the same.  If I had to rate the game by today’s standards, it would get a 6.5/10, getting points deducted for the controls and voice-acting, but points for it’s fun combat and storytelling.